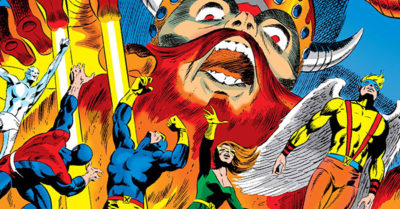 Honestly, they always makes me think of the scrawlings of a Serial Killer, like the notebooks upon notebooks in Se7en. That’s what it looked like to figure out – I had giant rolls of paper unspooled across the floor with scribbles and crossouts and loop-de-loop arrows on them.

While the web pages underwent some editing between that stage and the final product, I launched the entirety of them all at once. They were the best format I could figure out at the time, which isn’t always the easiest thing to follow. And a lot of people have followed them.

Now it’s time to ameliorate this awesome resource up to the current standards of CK’s best reading guides. Era #1 has been vastly expanded and clarified, with new formatting, more comics, better explanations, and clearer notations. (Era #0 received a stealthy similar treatment a few months ago as a prototype for this new format.)

I hope to continue working my way through improvements to the remaining 13 eras at a slow-but-regular clip so CK can remain the #1 best resource for reading X-Men on the entire internet!

As for CK’s most-demanded feature of all time – a Marvel Now X-Men Reading Order – I’ll just say this: I’ve already got it, but it’s in the form of thousands of records in a database. Will that ever see the light of day in a reading guide?

I have no comment for the moment, but if that’s an answer you’re keenly interested in you might want to consider contributing as little as a $1/month pledge to cover CK’s hosting expenses. For… reasons.