The sky is endlessly growling and hissing and it is crumbling down on us slowly but surely as i speak. The great court of our main building has a skylight in the middle of the ceiling made up of 81 tiny windows on the heavens arranged by nines, and when the sky is this angry the building is cast in the make-pretend candle light held up by tiny cherubs flirting with the shadows that surround them. When i hear thunder i bolt out of our back office door to imagine the court as i might have seen it lit a century ago.


And our website doesn’t have a single picture of it; however, this is the visageless keeper of it all.

Hairdressers are more dangerous than psychics. A psychic has to make the first move; their job is to know what to say before you tell them what they should be talking about. If a psychic has a false start, they’re done for. Your disbelief is suspended only as long as they can keep pumping out vague connections and suggestions.

Hairdressers are an entirely different story. With a hairdresser, you start the exchange – they will stand there and glare at the back of your head and clip clip clip until finally you feel the intense need to break the silence. The clicking of the scissors eventually overwhelms you, and you open up your mouth to speak. Even then the burden isn’t on the hairdresser, because for all they care you could talk to yourself in the mirror the entire time. That’s what the mirror is there for, afterall.

And so you talk and talk to your own reflection until finally you strike upon a topic. Astrology. South Philadelphia. White trash. Divorced parents. Heat waves. And, suddenly, you are putty in their hands.

This is how hairdressers operate. They lie in wait like a spider at the center of a web just waiting for a fly to catch its leg on the tiniest strand. And then the pounce – yes, they know just what you mean about living in South Philly a mile away from the projects and trying to pick the nicest street to take up to South and oh my aren’t those little old ladies that live next door the friendliest thing ever? I sometimes think hairdressers all take classes in character acting and do regional surveys so they can be anyone they need to be for you to talk to; the only reason that they have a shampoo girl is because they are at their station slipping to right character for you.

Hairdressers bait and switch. Trash South Philadelphia but then mention that you just moved in a block away from my house. Talk about how astrology never works and then talk about how your boyfriend’s sign is perfect for you. Mention how the news overhypes heat waves and then lament the heat-related deaths. And then joke about them. Because, the haircut is immaterial, really. I know plenty of people who consistently get bad haircuts but keep crawling back for the same damned happy banter. Hairdressers are our pop-psychologist, our armchair psychic, our trendy aunt with the cool hairdo and hip belt. Their opinions matter, and they are forever waiting for you to just say the right words.

So, i have a lot less hair right now than i did yesterday, and i’m not really happy about it because i look very normal and not nearly as pretty as i usually look. So, until i get brave enough to appear on cam with the new haircut, please appreciate what i’ve left behind… 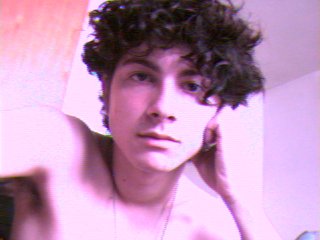 No matter what room i pick in our new apartment i have a slopey ceiling and a wall all in red brick and mortar. My mother and i were looking at houses the summer after my Junior year in highschool, and every house was a fight. I was insistent on staying within an easy commute of my highschool, and she was insistent on not buying some horrid house just so i could be close to my highschool. There was one last house we looked at before we finally looked at rentals, and it was in this odd mid-suburb that’s actually still a part of philadelphia. It was a compromise… wide flat streets with sidewalks tucked inbetween grass on either side, sagging porch roofs extending out from standalone single and double homes that looked grey and sad. I was bitter and disinterested, because it would be nearly impossible for me to get to school from there, but i remember walking up to the third floor and my mother saying it would be wholly mine and seeing how half the walls were brick and i had my own tiny bathroom and how the ceiling sloped at angles from the top of the roof down to the eaves and thinking … “but, i could live here. this could feel like a home.”


Today the realtor walked down the stairs to leave me be and i stood spinning on the top floor at 44th and Walnut streets thinking “i can live here. this can be home.”

When i was little i used to love 45’s. For those of you who are my age but lacked musically enthusiastic parents, 45’s were vinyl record singles. The number ’45’ referred to the speed that you’d play them at on your record player. Back in the 80’s, they made record players for children… little FisherPrice affairs done up in child-safe plastic with absolutely no edges. Back when Woodland Avenue used to be a place you could actually go shopping my mom and i would take a trip around the corner every week or two to go to the music store, and i netted quite a few 45’s in the process. I have happy memories of “We Built This City” and my mother’s old copy of “Bungle in the Jungle” and some random Expose song that i’ll always associate with the smell of baby powder because when i first listened to it i had just taken a shower and i was sitting on my blue rug smelling like baby power.

The cool thing about 45’s is that they had an A side and a B side to them … the single was on the A-side of the record, and some other song would be on the B-side. Singles now-a-days don’t really have the same kind of dynamic – they’re all mostly just remixes and radio edits. But, in the 80’s B-sides were fun; they’d be a track from the album that would further entice you to buy it, or sometimes the instrumental version of a song (like the B-side for “La Isla Bonita”). However, the most special kind of B-sides were songs that weren’t found anywhere on the album that the song was released from, and today that’s what a B-side is when people refer to artists like Tori Amos or Garbage. So, today there are 25 primary songs for you to aim your ears at, but also 25 B-sides that aren’t necessarily from this little adventure, but for you all the same. Enjoy.