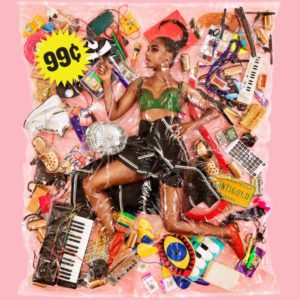 Does it sacrifice some of Santigold’s idiosyncrasies to get there? I’m not sure. Santigold is among a number of late-00s Electropop artists that I never entirely absorbed upon their first hit of fame. I don’t know where she’s coming from and I don’t have a raft of expectations to battle against on each new LP.

Maybe that’s s why I don’t know quite know how to talk about “Can’t Get Enough of Myself.”

Its easy, loping stroll topped with a constant bustle of triplets and a whistling high synth flute melody. The sound calls back to Stevie Wonder and post-Motown/pre-Disco 70s soul (even with modern touches, like a slight digital detuning on the flute riff).

(My mother loves an obscure (though frequently-sampled) 1976 LP by the band Dr. Buzzard’s Original Savannah Band that occupies that some space in my mind, particularly “Sunshower.” I remember when it was finally released in CD she was rapturous.

Is it typical of Santigold? Are these her typical influences? I don’t know, and when a song is this good I’m happy to delay my research while I listen to it on repeat for a few more hours.

Aside from the inherently sunny charm of the throwback sound, there’s the unabashed happiness of the track. It’s infectiously cheerful, both melodically and in lyrics. Here’s the opening verse and chorus:

That’s a refreshing take on modern “drunk on my own fumes” braggadocio without lessening the intensity of self-love. It simply removes the component of superiority from self-love. When Santigold sings, “look at them liking me,” there’s no indication that just because she’s the the best she’s any better than anyone else.

In fact, maybe everyone should be exactly this vainglorious in their own heads as they walk down the street. They certainly might feel that way if they had this song pumped into their ears.