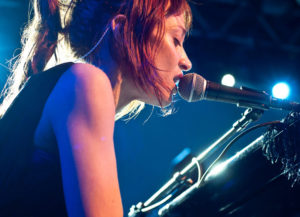 Fiona at SXSW this spring.

It was 1999, my freshman year of college, when Fiona Apple’s When The Pawn…

I don’t know if I would have called myself a fan of Apple’s at that time. I had picked up her first album in Junior year of high school thanks to the recommendation of my computer programming teacher, and saw her twice on the tour behind it.

Though I grew to love Tidal over time, it was always a little sleepy for me at the time. I loved “Sleep to Dream” from the start, plus “Criminal” and the thrumming “Carrion,” but on the whole it was subtle for my teenage years. So I can’t tell you exactly why I picked up When the Pawn… If only I had started a blog a year earlier!

What I can tell you is that I thought – and still think – that the LP is a work of utter genius. Every song is an incredible feat of songwriting. Fiona’s voice is throaty and lush. All of the arrangements are imaginative without being over-bearing. It is a five-star effort that I still listen to front to back almost once a month.

I followed all the Extraordinary Machine drama and, as you may recall, I didn’t love the finished product. I did still love the songwriting. It was another all-genius every-time effort. That’s not easy to do twice in a row, especially on your second and third releases!

was announced earlier this year. Sure, new Fiona Apple record – great! But who knows if she could keep up the genius streak or find the right sound for her songs.

(Yes, I know, advertisement, but this performance is so amazing, it’s worth it. If you’re seriously opposed, here’s another great performance on YouTube.)

I don’t know that she achieved either, but she made an arresting, challenging work of art in the process, and she is delivering similarly arresting and somewhat terrifying live shows in support of it. At the Tower Theatre Apple looked like she might shake herself right off the stage, or simply disintegrate where she stands from the sheer intensity of it all. (She also sounded haggard, which is concerning, since we’re still early into her tour, but she sounds better on the video, just a week prior.)

While many are fixated on single “Every Single Night,” I thing early leak “Anything We Want” is the pièce de résistance on this record. It’s the one song where the minimalist pounding-on-things style of found-sound production definitely doesn’t detract from a song that clearly has some intricacies built in.

Also, the lyrics are quite genius – a story of seduction spanning time and space. Witness this clever device. 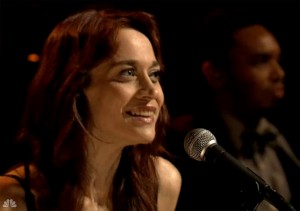 last verse
Let’s pretend we’re eight years old playin’ hooky
I draw on the wall and you can play UFC rookie
Then we’ll grow up, take our clothes off and you remind me that
I wanted you to kiss me when we find some time alone

That’s just stunning. The very oblique seduction in the first verse is resolved by very adult tryst in the final one. Yet, in the final verse she contrasts that lust with pretending that she’s eight years old. Kids kiss, and grown-ups take their clothes off. Is the “let’s pretend” a remembrance of her own youth with a now adult lover – a flashback to more innocent flirtations? Or, should we read the “Let’s pretend… then we’ll grow up” differently – that they are so effortless and comfortable with each other that they regress to their childhood selves and grow forward in the room together, until they are adult enough that he reminds her where she wanted to be kissed hours or days before, since forgotten?

Stunning. The turn of the lyrics keeps me rapt every single time I listen to it.

I want to believe Fiona Apple is healthy and happy at the moment – a recent giggling and quite normal appearance on Jimmy Fallon supports the theory. If she keeps laughing and living and releasing strong work, I’d say it was one of the best concerts I’ve seen in my life, and The Idler Wheel… is a brave experiment by a singer with a still-unbroken streak of excellence – even if it’s never the excellent we expect from her.