With the launch of my monster definitive guide to collecting X-Men comic books as graphic novels, I have officially become a fifteen year-old.

Allow me to explain. Or, to begin to, as I’m sure this is a multiple-post-spanning story (just as that website feature was a multiple-month spanning obsession to research).

A few months ago Philly-local social media mover/shaker/sandwich-connoisseur @MikeyIl threw a series of events for the Ford #FiestaMovement. One of them was an all-local art show, featuring work by my partner-in-fame Britt Miller, as well as Eddidit and others.

Being Britt’s unpaid intern / personal assistant / life coach and a faithful supporter of friends and local artists, I got my ass there – even though the event was smack in the middle of negotiating the price of our house with our Realtor over the phone.

Where was that fateful art show held? 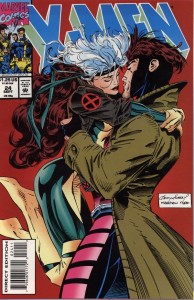 It was a brief but tumultuous affair. Comic books combine my love of serial narrative with an OCD urge to make meticulous, alphabetical lists. They created a 10-year-old who would do anything to earn $40 a month to pick up every book bearing the image of Wonder Woman or an X-Man.

(Seriously, I’m surprised I wasn’t peddling coke for my neighbor. It’s a good thing my guitar habit didn’t get to drug-running levels of expense until after college, when I was salaried.)

For only collecting for four-and-a-half years, my comic collection is prodigious. Not only did I collect new issues weekly, but in the pre-spreadsheet days the adolescent OCD Godzilla in my soul – a mere tadpole, at the time – compiled lists of back issues by hand… lists twenty and thirty pages long, complete with estimated budgets and timelines for purchase. Every few months my father engaged my whim, and I checked off line after line.

I was hardcore. The guys at the comic store treated me like I was twice my age (now ironic) because I was so on top of my shit with my pull lists and my back issue pricing and my discussions of the Magneto’s morality and if the ends truly justified the means.

Then came the internet. AOL dial-up cost by the hour, and I was hooked on it within minutes of my first sign-in in January of 1996. Four months later my wallet issued an ultimatum: limit my internet usage, or jettison my comic addiction – now complicated by Marvel’s 90s’ decadence of holographic covers and limited series.

The real decider was probably a demo of Warcraft II, a living digital board of Risk I could play over and over again with my friends over my 14.4 baud modem.

I dropped the comics and never looked back.

(To be continued! In the meantime, if you’re a closet x-fan who wouldn’t know a pull list from their elbow, check out definitive guide to collecting X-Men comic books as graphic novels – the easiest (and cheapest) way to be an adult comic book fan.)