Sometimes you find music that is so in tune with your own influences that it seems to be deliberately made for you.

The Dresden Dolls are that. 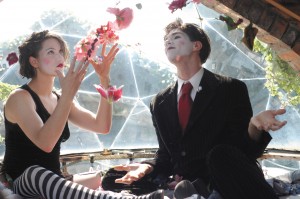 The Dresden Dolls are a two-piece band – hard, clanging piano from Amanda Palmer and the best drumming on the planet outside of Scandanavian death metal from Brian Viglione. Amanda sings in a smarmy, cabaret-influenced alto belt which over the years has become a third finely tuned instrument in the band’s arsenal.

Already they are completely up my alley. Then, it turns out the Dresden Dolls are influenced not only by cabaret and punk, but by Bertolt Brecht and David Bowie. They love winkingly nodding to unusual corners of pop culture, like covering the Maurice Sendak poem (and personal anthem) “Pierre” and – on Sunday night – covering an Auto-Tune the News song.

I originally heard about the Dolls from our friend Chaz, but didn’t really get the point of their vicious cover of Black Sabbath’s “War Pigs.” Then, 2006, we were headed to Bonnaroo and I saw their “Yes, Virginia” on the Bonnaroo artists rack. What the hell?, I thought, and picked it up.

That album became one of my favorites of the decade, and yielded perhaps my favorite song of the decade, “Backstabber.” Virginia transcends punk cabaret to be an awesome pop album filled with hyper-catchy singalong anthems with a subversive bent, like “My Alcoholic Friends” or “Mandy Goes to Med School,” a catchy tune about being a back-alley abortionist.

Sunday night at their 10th Anniversary Concert they played “Backstabber,” “Mandy,” and just about every other song I love, and ended with “War Pigs.”

This time I got the point.

The music video for “Shores of California”