You are here: Home / Personal / off-topics / childhood / How to succeed at (the (video) game of) life.

(My musical other half Gina debates the topic of life being like a video game in a song, asserting that “there’s no extra lives, you don’t get big from a magic mushroom, and you don’t find coins in an underground room,” but let’s leave that argument aside for a moment.) 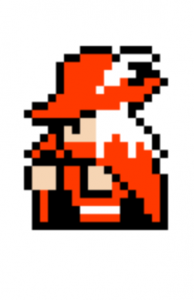 The timeless style of the Red Mage

I remember the first Final Fantasy, for Nintendo. It was my (and millions of others’) first exposure to the concept of an RPG. Sure, older kids had played some D&D by 1987, but that was the demonized (heh) occupation of confirmed nerd. FF brought that nerd-dom to the spoiled kids who already had their own NES.

(Nope, no bitterness there.)

In the original Final Fantasy each character was an archetype: Fighter, Thief, Black Belt, White Mage, and Black Mage. That meant you were good at that one thing, and mostly that one thing only.

The exception was the Red Mage. He could cast black and white magic, plus fight a little. Oh, and he was styling with a long coat and a pimp-hat.

This seemed like the perfect solution to six-year-old me (and probably a lot of other people, too) – why waste time with characters who are only good at one thing if you could have one that’s good at three? Why not just have a party full of Red Mages?

Of course, game developers realized this, and so the Red Mage wasn’t quite as kick-ass as we had hoped. He could fight, but not as well as the Fighter. He could cast spells, but not as advanced as the White and Black Mages. A party full of them would rock at the easy levels, but probably wouldn’t stand a chance in the end-game.

In effect, game developers rewarded specialization. The jack of all trades wound up the master of none. Also, he had a branding problem – we called him a “red” mage, but wasn’t he more like a grey mage that could also hit stuff?

(The myth of a character that’s good at fighting and hurling powers from a distance continues in video games to this day, called a “Tank Mage.”)

Maybe six-year-old me liked the Red Mage so much because I was a Red (Tank) Mage. I was good at science and math, strong at writing and social studies, and eventually on stage in plays. I’ve always delighted at being self-sufficient, which meant being good at everything.

A decade ago if asked to describe my strongest skill in one sentence, none of my friends would have answered with the same “Peter is/does [x].” I didn’t have a brand. I went on my merry way, doing everything, but I wasn’t the greatest at any of it.

That’s the story of my blog, too.

November is Na[tional] Blo[g] Po[sting] Mo[nth], a month which challenges us to blog daily. It sounds easy, but you have to maintain it through Thanksgiving! And, in some years, through getting engaged to your wife!

This year for NaBloPoMo I’m trying something a little different. I’m branding Crushing Krisis. Up above us my tagline reads:

I’m setting an expectation – this blog is not a Red Mage. It’s about the things I love the most, Philly, and being a musician.

So, this month it’s going to be exactly that. And, just like a video game, I get a new chance at it every day.