You are here: Home / consume / reviews / Recommended: Far – At Night We Live

Krisis’s Recommended Releases of 2010:
Far – At Night We Live 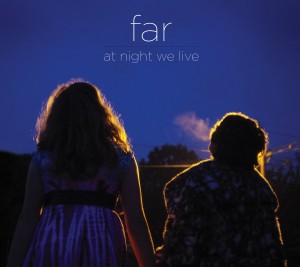 Far’s At Night We Live is an album that wears its rock on its sleeve, but an abundance of riffs and metal bombast are merely ornamenting an LP full of mercilessly catchy power-pop songs.

At the surface level, Far has a bracing sound slightly on the harder side of radio modern rockers – near neighbors seem to be Foo Fighters or 30 Seconds to Mars, and to a lesser extent more pop-oriented acts like All-American Rejects. But Far is differentiated from those bands not only by smart, layered arrangements, but by the handsome, tuneful baritone vocals from lead singer Jonah Matranga.

The titular melody on “Give Me a Reason” is almost too pretty to be a rock song, and even proto-typical screamery on “Fight Song #16,233,241” (biting hard on Eagles of Death Metal) turns into something shimmering on the chorus.

In that way, Far is like Eagles or a harder, less jocular OK Go – because both bands consistently display seductive, playful-but-mature vocals. Far even recalls, god help us, a less smarmy Rivers Cuomo, finally living up to the supposed love of hair metal that got him into music to begin with (check out “Are You Sure” and the super-Weezer “Burns,” each like a sticky wet dream of what post-Pinkerton Weezer could/should/would have been).

If the parade of hyper-popular comparisons sounds like a turnoff then this LP might not be for you. Almost every song has the immediacy of the best cuts on alternative radio in 2010, which marry metal influences with carefully crafted melodic work.

Again and again At Night We Live floats up and away from standard riffing to stadium-filling rock. On the whole it’s a strong, confident re-entry into the rock scene from a long-absent band.