The fourth post in this series finds your author all of three days before Gina’s Bachelorette Party AKA All-Day Adventure and I am, let’s say, FREAKING OUT. 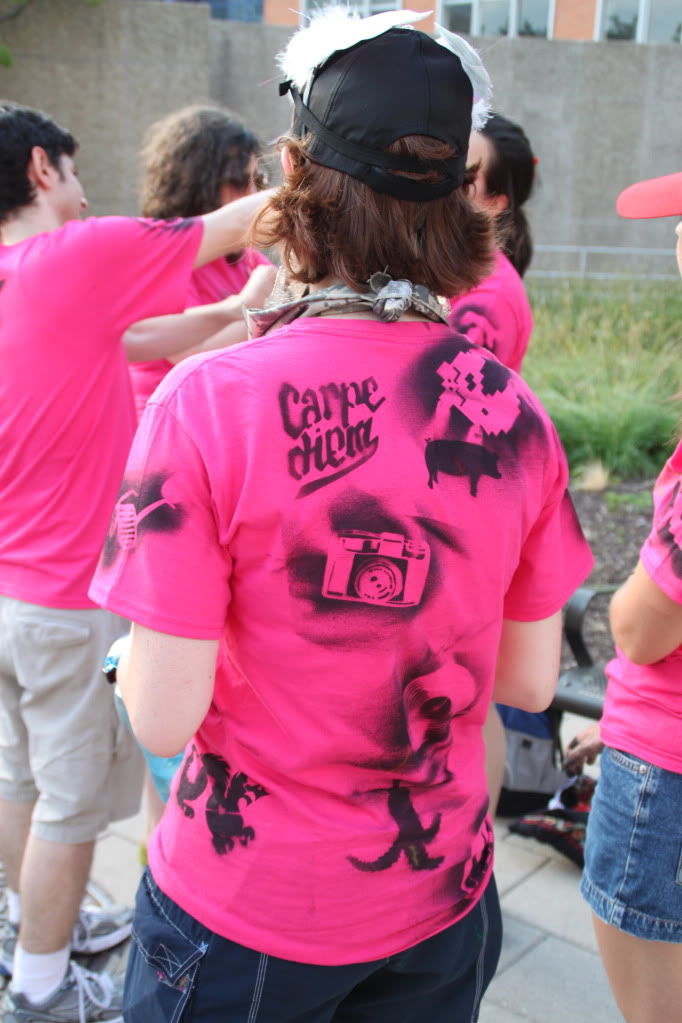 Gina modeling a vast collection of our stenciled icons in action on Gina's back late in the day in her bachelorette adventure (while Mikki and I spray more stencils int he background). As you can imagine, we had to spray these quickly and in highly public spaces.

Allow me to set the scene for you. It is eight or nine at night. I am on my side patio, which I like to pretend is private but really is quite in full view of anyone passing directly in front of our house.

I am wearing only my underwear. My blindingly white naked torso vibrates against the dusk like a bike reflector. I am dual-wielding two cans of spray paint against a defenseless bag of planting soil, which is wearing a plain white t-shirt. The shirt bears several iterations of the Starfleet symbol, some in black spray paint, others apparently colored in with a marker.

I swear, if photographs of this scene existed, I would totally share one.

Why this utter madness? Let’s travel back in time two days. As the guy on the ground in Philly, I was on the receiving end of the various bachelorette party supplies selected by Kelly (in Belgium) and Mikki (in Seattle). Both women are so ridiculously kitschy and crafty that it defies explanation. I received many things. A box of 30 pink t-shirts. A set of Erlenmeyer flasks and graduated cylinders. A package of vaguely phallic sidewalk chalk.

What I did not receive was spray paint for branding our t-shirts.

The t-shirt iconography had become central to our gamification concept for the party, with Gina choosing a team for every challenge. If the team defeated the challenge, they would be branded with a special stenciled badge. Think of it as “Foursquare: LIVE!”

Despite working all day in the midst of a team full of craft maniacs, I am not in the least bit crafty. I’m not even good at speculating about methods of craft. I am good at desktop publishing and subsequently printing things on high end paper. That’s about the extent of my crafting abilities. I am not great at creating things with my hands. I still have problems changing guitar strings.

Thus, the spray paint issue was very … concerning. Three days to the party seemed like the time we should be testing the spray paint, to make sure it would work. Kelly and Mikki had mentioned a few potential brands in their emails, but I couldn’t find any online that I could get shipped in three days, because spray paint can only be shipped via ground.  I started researching other spray paint, discovering that most of it needed to be sealed with heat before it set. Every time I found something that sounded like it might work (including, hilariously, “Hunters [sic] Specialties Permanent Camo”) I ordered it for the fastest shipping possible, all the while getting increasingly frustrated that I was researching spray paint at all instead of writing Gina’s instruction book. 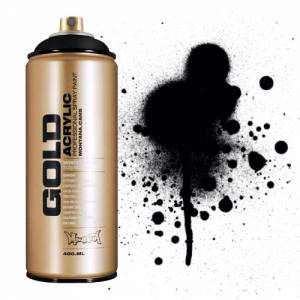 The very highly recommended spray paint choice of Kelly and Mikki was "Montana Gold Acrylic Spray Paint," which comes in every possible color, including metallics.

Remember how I recently shared a leadership assessment that said that I have a strong future vision while focusing on data and clearing obstacles? Well, it also told me that under stress I become myopic and focus only on information overload and slaying things.

It’s not a big leap to the scene that opened this post. I had five cans of assorted spray paint and two markers lined up and had dressed a 40lb sack of dirt in one of my old t-shirts. At a loss for an icon I could quickly stencil out of a sheet of cardboard, I went back to basics: the starfleet insignia. Not wanting to get spray paint on my clothes (even clothes I’ve set aside specifically in a bin entitled, “for painting”), I elected to strip down to a pair of blue bikini briefs to conduct this exercise.

Welcome to my brain. It is a scary place.

The next morning Kelly and Mikki talked me down from my panic after I sent them not the sanest or nicest email I have ever written. They helped me figure out which local stores carried the paint they both recommended, and Kelly assured me we could visit one together when she arrived stateside. Mel coaxed me away from my desk at lunch and convinced me I would not have a panic attack from entering a craft store. I bought the recommended spray paint.

Now we had all of the necessary elements for Gina’s party, save for three: Kelly, Mikki, and the instruction book that would lay out the rules of the game and all of the various challenges.

Tune in next time for Kelly and my madcap adventures the day before the party, how an off-hand mention of a “side-quest” turned into the most hilarious part of the event, and samples from the now legendary instruction book.