My fascination with the Pretenders began with a television commercial.

I’m sure you remember it. Barbie and G.I. Joe racing around in a toy Corvette to the vamped drum intro of “Message of Love.” It was an awesome commercial. My mother is ace at identifying older tunes tapped for commercials, and in the pre “just Google it” age it was her who told me the song was by The Pretenders.

I knew of this group and their bang-èd singer Chrissie Hynde, but had never bothered to pick up any of their LPs until after the commercial. As is my way, I decided I’d rather get to know The Pretenders album-by-album than via greatest hits, and bought all three of their first LPs on New Years Eve 1999.

To my surprise, I actually knew a lot of the songs. Seemingly all of them – even the non-singles. It was like they were already tattooed on my brain. But the one that really resonated – which, of course, I had heard a hundred times before – was “Back on the Chain Gang.”

(Watch me cover “Back on the Chain Gang” on YouTube. For more info on my 30 for 30 Project, visit my intro post.)

There was something about the simplicity of that first line, “I saw a picture of you.” All it took was a single wistful glance at that forgotten photograph to hijack the narrator’s world and sent her crashing into the sepia-tinged realm of memory, where she rages against and eventually resigns herself to her lot in life as a broken-hearted survivor.

(The context is that this was one of the first songs recorded without the band’s original lineup. Bassist Pete Farndon had been fired the month prior to recording due to his drug abuse. Original guitarist James Honeyman-Scott died of a cocaine overdose just a few days after that. (Farndon died a year later from drowning due to a heroine overdose.)) 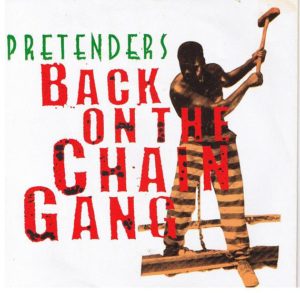 Then, there is the music. The deceptively calm guitar strums that are actually quite fast, like an undertow swirling beneath a nearly-rockabilly lead line. The workmanlike chants on the chorus, which Hynde draw from Sam Cooke’s “Working on a Chain Gang.” Asymmetrical transitions due to Hynde’s strange counting quirks, as often highlighted by both her and drummer Martin Chambers. The constant hints of suspended chords throughout the song thanks to riffs inside of strums, and that stabbing minor sixth on the bridge. The sudden key change, and how it sounds exactly like the sun peeking through clouds to interrupt a gray, rainy day – and how the entire final verse subsequently sounds more major, even though it’s exactly the same as what came before.

(Hynde is one of the most criminally overlooked songwriters and lead guitarists of a generation – and that’s without the caveat of her gender.)

I’m not a method performer who believes I have to personally feel the emotions of a song every time I play it, but if you’re planning to cover this song you must bring a certain regretful longing to it. You simply cannot play it with a wink and a grin. I’m proud of my biffed line in the final verse, because it was either biff the line or start crying, which hopefully means I was doing something right.

(While “Back on the Chain Gang” was on the Learning to Crawl LP in 1984, it was originally issued as a single in November 1982 with the classic bassline of B-Side “My City Was Gone”. If this was an Arcati Crisis band project our pick would be “Total Eclipse of the Heart.”)