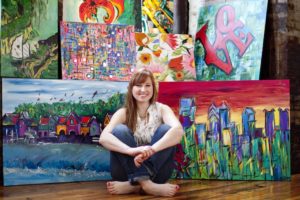 Britt amidst her Philly-themed paintings in 2010. © Steve Boyle

Today my suggested #FollowFriday is a woman who – with no exaggeration – has altered the course of my life.

Her name: Britt Miller, or @brimil.

I could list all of positive ways my life has changed with Britt’s influence and collaboration, but this one quote from her sums up our shared philosophy:

No one beamed down and made me an artist, or “successful,” or well-connected overnight. This wasn’t a gift, it took work. Make moves, do work, tell people.

Why follow Britt? She engages. She’s funny. She’s a painter whose work has appeared on everything from sneakers to television talk shows. She’s an athlete who has powered through a half-Iron Man. She’s a communications professional and a business student about to embark on a year of international travel.

Most importantly, Britt is a Connector. She’s always happy to make a random new acquaintance, because she understands the true value of a robust network lies not in the present, but in the future. Those seemingly meaningless connections have paid off for her and her followers again and again.

Enough from me – let’s hear from Britt, in her own words.

@krisis: There is a fan-favorite CK post about my perspective on meeting you for the first time. What’s your side of the story? 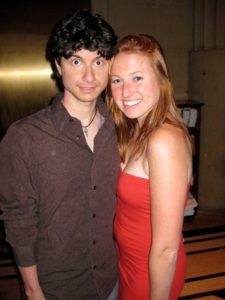 Britt and I pose in 2009, a few hours post-skydive, as shot by @Mikeyil

@brimil: I met you while I was working at IBX in Philadelphia. I was very passionate about social media and kick-starting the business use of social media to connect with customers. You came to the first social media meeting, and the rest is history :)

@k: Yes, a history of jumping out of planes together and you being my personal digital life coach and partner in all things FAME. Can you explain this “FAME” thing we have? I can never quite articulate it when people ask me.

@b: Ah, FAME is very difficult to express in words. FAME is the act and feeling of constantly achieving your wildest dreams (they start small at first, then grow; FAME is never over), and having friends, family, and eventually strangers support you in your endeavors. It’s being recognized and praised by society over something that you poured your heart into. FAME.

@b: I use Twitter to promote my art, to stay in touch with and connect with new friends, to follow people/things I’m interested in – accounts that post about art, travel, social media, Philadelphia, etc.

@k: In the past few years your original art has gone from a regular hobby to an actual business. What was the decision point where you said, “this is something I’m serious about”?

@b: The switch from hobby to business certainly came when I made my website, held my first First Friday show, and sold my first piece to a stranger. Those three events happened over a period of time, but after all three happened I think I realized that I had something there, and with a ton of hard work, it’s gradually taken off since then. 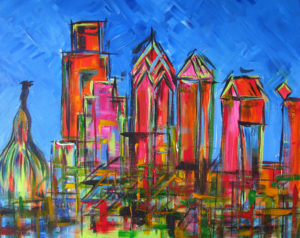 One of Britt's Philly skyline paintings.

@k: Your art has turned up in some interesting places, like at Drink Philly First Friday events and on customized sneakers. What the most unusual hook-up you’ve made for your art so far?

@b: I’ve had quite a few great art opportunities beyond the standard gallery shows. I’d say in addition to the two you mentioned, the most interesting ones would be designing all of the set artwork for CBS3’s Talk Philly, and designing a custom chocolate box for Teuscher Chocolates, located in the Bellevue.

@k: What’s the coolest thing that’s happened to you because of social media?

@b: The coolest thing that has happened (over time) is the fact that I’ve met and stayed connected with about 85% of the people I know in Philadelphia over Twitter. In terms of my art, I’ve made many commissioned sales through people who have found out about me via Twitter, blogs, or Flickr; which is great. It’s helped me connect and promote myself in a way that would not be possible without these channels.

@k: How did you begin cultivate that network when you first got on Twitter? What advice would give to a new tweeter who wants to connect with lots of interesting people?

@b: Basically just all the same things that would allow you to connect with interesting people in your everyday life: be real, talk about what interests you, follow those that interest you, and speak back when spoken to. I don’t over-think it too much.

@k: You’re about to spend a few months abroad in Paris. What are you most looking forward to? What’s the scariest part of moving there?

@b: It’s scary that I’ll be in a new area, and don’t speak the language, but I’m just looking forward to seeing so many more things and living in another culture. The travel bug sparked in college and hasn’t let up since. In the next year I’ll be living in Paris, Philly, India, China, and Japan; and there’s no better time to be doing it.

I hope you’re now a fan and follower of @brimil! Before you go, share your personal #FF in the comments below so I can expand the people I follow, too!