With DC Comics re-launching its entire slate of books this month, the most-anticipated title after a vaguely-disappointing Jim Lee drawn Justice League is doubtlessly Action Comics, written by Grant Morrison.

Morrison is a hyper-praised comic author who has written everything from indie fare to X-Men. His multi-year shake-up of Batman comics has been to the comic line what Nolan has been to the movie franchise. He’s also an insufferably self-obsessed egoist and drug addict, both as confessed in Supergods, his recent autobiographical look at comic history.

Suffice to say, I run as hot and cold on Morrison as a Katy Perry song. How does his reboot of the longest-running comic title in the world go? Let’s see… 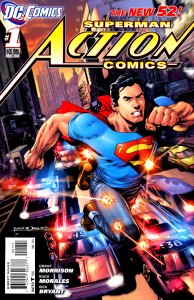 In a line: “Non-native strains WILL destroy entire ecologies, given the opportunity.”

Grant Morrison is superb at debut issues, and this is no exception. He presents a constantly moving half hour in the life of Superman that unfurls in near real-time thanks to the engrossing plot of the issue forcing you to linger on each dialog balloon to absorb all of the implications therein.

The constantly intercutting narrative is effective in keeping the anticipation of spending panel time with Superman high. Even though we see him on the first page (a wise move), we then spend several pages away from him, viewing his wake of destruction and the police’s abject dread in dealing with him.

Morrison writes Superman as well-spoken but cocky (“That ain’t Superman”). His powers are kept deliberately ambiguous, though it’s made clear that he cannot fly. As he exerts himself more his dialog gets more clipped – at points becoming an animalistic collection of sniffs and grunts.

Luthor is snide and has little regard for others, but he’s somehow still likeable – as he should be – and as-drawn a dead-ringer for our author.

Superman is portrayed as growing in power as he self-polices everyone from domestic abusers to mob bosses. Is it the right thing to do to turn Superman into a vigilante when we already have Batman? Or, is the only way to start a new decade (or more!) of Superman stories to begin with him as more of an alien than Clark Kent?

We get a handful of supporting characters, sketched in well-enough for the moment. General Lane is a patriot in bed with a snake (Luther). Olsen is a trusting mop-haired kid equally beholden to his new friend Clark and ice-blooded over-achiever Lois.

There is little to nitpick. A sequence with a high-speed train perhaps intercuts too much, warranting a second read. That’s nearly the only gripe, and it’s swept away by the parallelism of Superman catching two bullets on either side of the story – with differing amounts of success.

There isn’t a right answer – just good comic books. And this was one. 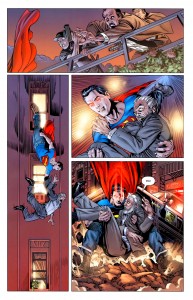 I’ve never read an issue with Morales art before, but I’m pleased with him here. He can switch from static talking heads to kinetic action in a single panel. His t-shirt wearing, work-booted Superman is delightfully fresh and surprisingly iconic.

Morales effectively toys with Superman’s age throughout the issue. In his first shadow-faced confrontation with police, the heavy lines around his chin make him look middle-aged. A page later his face is gleeful and childlike as he leaps from a balcony, and a smug teen when facing down his would-be jailers.

Meanwhile, as Clark he is half Christpher Reeves, half Harry Potter. All the while, we see the same square-jaw.

It’s the supporting characters who sag. Jimmy and Lois look a bit askew, and background characters can be a bit ragged. Also, a few panels of ambiguous art don’t aid the already-complex train sequence.

Action Comics #1 is a thrilling anchor to the clearly all-new continuity of Superman. Anyone hoping for an issue of a big, blue boy scout pushing planets out of their trajectories will be disappointed by this smaller scale exploration of the ambiguities of justice and of being human.

If that sounds like a boring issue, keep in mind that it still involves being faster than a speeding bullet and leaping tall buildings in a single bound. Oh, and a wrecking ball.

No one in the issue makes the case for Superman being human – Morrison is deliberate in having every character refer to him as an animal, alien, or even a thing. However, in our brief time with the bespeckled Clark we’re left to wonder – if it thinks like a man and cares like a man, how can it be an animal? Not for nothing, but Morrison’s book was subtitled “What Masked Vigilantes, Miraculous Mutants, and a Sun God from Smallville Can Teach Us About Being Human.”

Is this issue a modern classic? Hard to say, but Superman scholar Morrison doesn’t waste a single word while Morales keeps the issue full of impact – it never feels decompressed to drag out the story.