DC’s final week of relaunched #1 comics is an peculiar one that can’t decide between sure things and novel experiments.

We get a hunk of the Justice League in Superman, The Dark Knight, Aquaman, Flash, Hawkman, and Firestorm – plus a second Green Lantern team book. Those are all marquee titles, plus the high-visibility Teen Titans.

There’s also a strong oddball contingent: a Vampire book, a Wildstorm refugee, another miltary book, a western, and a reverse image of the Justice League in their “Dark” title.

What will the best title be? Will we see a repeat of weeks one and two, with several stories that will make your stomach do jumping jacks of excitement? Or, will it be more like last week, with a middle ground of titles that promise future excellence?

Whatever the case, when the week is through we’ll see just how successful DC’s highly controversial reboot really was. 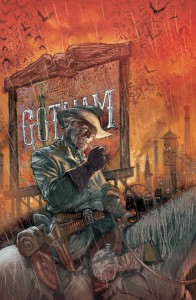 I know, when I saw the title I slipped into a deep slumber too. Is DC really taking it old-school, to when the newly devised comic code sent superheroes into hiding and we wound up with a newsstand full of westerns and romance comics? Not quite, because this book follows supernatural-tinged gunslinger Jonah Hex. Also, it’s written by veteran storyteller Jimmy Palmiotti, who got his start as an inker for Marvel comics (and, especially for Joe Quesada). The time period still isn’t a surefire hit for me, but there’s enough here that intrigues me that I can give this book a fair shake.

What else is out this week, including not one but two books I am absolutely salivating over? 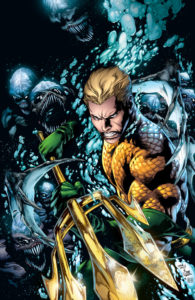 Despite all the mocking he receives from … well… everyone, Aquaman has always outdone his fishy Marvel doppleganger Namor when it comes to starring in an ongoing solo title. Now he’s renounced the throne of Atlantis, but that probably makes him more vulnerable to the bad guys. And, anyhow, who wants to read about a boring king? The kink here is supposed superstar writer Johns, who has been a lot less than stellar on his two titles so far. I get the sense that – much like Marvel’s Bendis – his writing is for the DC faithful less than the casual fan. What that means for a character who I’ve never read a single page of before, I don’t know.

This is the only Bat-book left after last week’s avalanche of titles, and it’s a doozy. Am I excited that Batman has to slink through Arkham Asylum to track down a foe? Video game tie-in much? No, it’s the creator that has me sweating this book. David Finch is a phenomenally dark penciller to pair with Batman, and he’s also taking over the scripting duties solo. In a relaunch full of artists turned writers, he’s the only one to merit that distinction. Does it mean he has the perfect voice for Bruce Wayne, or that this book will be all sumptuous visuals and very little chatting? (Editor’s Note: DC later added a primary author to the title, demoting Finch to co-plotter. Probably doesn’t change my excitement too much.) 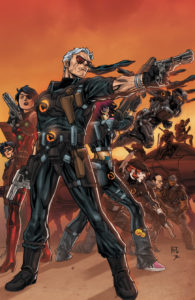 Blackhawks
Written by Mike Costa with art by Ken Lashley

If the DC solicit is to be trusted, this series will be a flatline. The Marketing department seemed unable to find any hook in the series, instead describing a generic-as-can-be terrorists vs. elite forces face-off of “kill the bad guys before they kill us.” Yet, there is a wild card here in artist Ken Lashley. I still remember picking up his first issue of Excalibur in the 90s, when he penciled Warren Ellis’s debut on the book. Lashley draws lean, fluid figures, and I’d probably prefer him on a superhero book – but maybe he can bring some life to DC’s second militarized title. 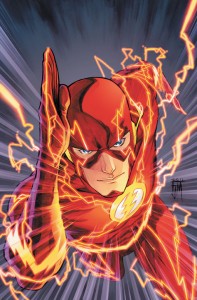 I’m loving the crisp, handsome take on Flash from writer/artist Manapul. Flash has never been my favorite hero in solo form, because how much can you really do with a guy that runs fast? His success is largely on the shoulders of the intelligence of his script, its ability to stay away from nonsense time travel schlock, and the deviousness of his villain. How does a villain who can be everywhere at once sound? Like something that will totally confound the speedster – hopefully leading to a strong re-debut. 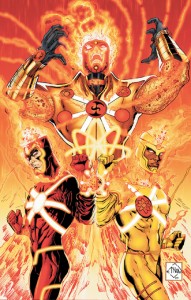 The Fury of Firestorm
Written by Ethan Van Sciver & Gail Simone with art by Yildiray Cinar.

Take one of the best writers of dialog in comics. Add Grant Morrison’s lushest former penciller, now defected to the scripting side. Pair them with flexible Turkish artist Cinar, who should have been long-since stolen by Marvel for his ability to churn out thrilling action on team books. And, focus this all-star creative cast on … Firestorm? Firestorm back in high school? Two Firestorms back in high school? I’ve got to leave my trust in the hands of the creative team and assume they have something killer cooked up, because in concept alone this sounds like another light-weight teenage book like Static Shock. I would have much rather seen this gang on Wonder Woman. 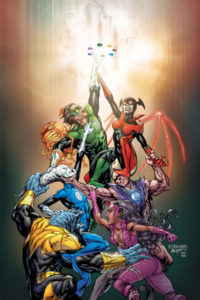 Was Green Lantern Corps not enough emerald for you? Have another lantern-shaped cash-in on a non-existent tide of interest from this summer’s not-buster! Look, I’m sorry that I hate Green Lantern, but we’ve broken through the bottom of the barrel to the pavement below here. A fourth Earth Green Lantern leads a multi-colored lantern corps to… do something? And it has the weird grunting lady I hated from Red Lanterns? God help us, if this is half as good as Corps it will be a sweet relief. 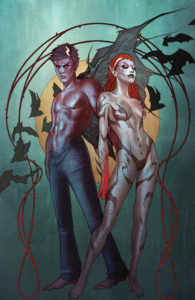 I, Vampire
Written by Joshua Hale Fialkov with art by Andrea Sorrentino

What would a comic line be without some fanged action? I don’t know if these characters have any DC history or are cut entirely from whole cloth. One good-guy vampire negotiated a detente with his blood-craving former lover, but now the gloves are off. At least it sounds like it won’t have a simpering Twilight vibe, but otherwise who knows what we can expect. 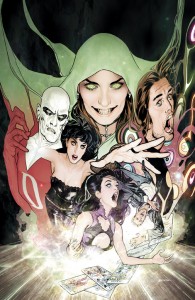 I may have hated Milligan’s Red Lantern’s book in week two, but that doesn’t detract from this being my most anticipated book from the entire relaunch after Batwoman. An all-creepy and -magical bizarro Justice League to handle the mystical and supernatural threats to the DC Universe, penned by a guy who does his best work on unhinged characters who don’t like each other very much? And that team includes two of DC’s most awesome characters, Zatanna and John Constantine? Sign me the hell up. Add to that the absolutely marvelous preview art and we have a potential smash hit on our hands. This will for sure be the first book I crack open on Wednesday night. 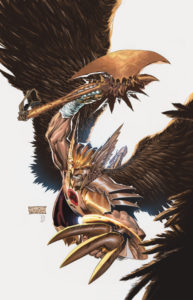 Wait, is that a second most-anticipated book of the week? How can my body contain all of that excitement? I’ll tell you how. I’ve loved Hawkman in every toy and cartoon conception I’ve seen, but I’ve never read him in a comic. I thought the whole Hawk Planet element was a little tiresome, honestly. Here we get a decidedly human Hawkman written by Tony Daniel, who knocked Detective Comics out of the park, with art by heavy-inker Philip Tan. I expect this to be a muscly smash hit of blood and feathers, and I really don’t think these guys are going to disappoint. 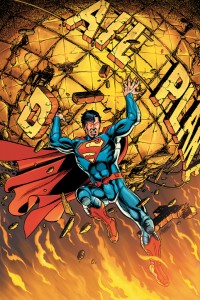 Well, we’ve waited all month to see Superman in present-day action (and to understand the connection to Stormwatch), and here we are. While I typically worship any effort by DC vet Perez (who inked Green Arrow earlier this month), I don’t think he’s the greatest fit for Superman as a writer or a penciller. That said, he was the man behind Wonder Woman’s most solid relaunch, back in the 80s. The preview makes it sound like Superman will come out swinging in this title. Will it be a kid-friendly bash-up Supes comic, or one of Perez’s mythology-heavy reimaginings? For DC’s sake, I hope the former, because Grant Morrison on Action is a little too weird for your average tween. (On the flip side, this might seem hopelessly trite compared to Morrison.) 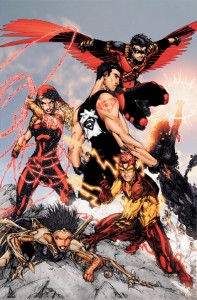 It’s a third former Robin – this time, Tim Drake – who precipitates this team up. He’s vastly outmatched by a team that includes junior versions of Wonder Woman, Flash, and – if the art is to be trusted – the new Superboy. I’ve never once had the urge to pick up a Teen Titans book but, like Red Hood last week, this is the kind of title that plays to Scott Lobdell’s strengths. Except, that title was abominable. Add to that bold, dynamic artwork from Booth & Rapmund and this could be a brash, explosive title or a complete failure. 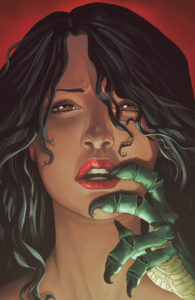 Voodoo
Written by Ron Marz with art by Sami Barsi

The other half the WildCATs pair of solo titles that made it into the relaunch stars former stripper and half Daemonite Voodoo. Alan Moore since touched the character in a solo run I have no knowledge of, which is maybe why she merits her own book here. Art previews have shown the issue is heavy on the stripping, light on the … well… anything else. I think there are a lot of interesting things to be done with Voodoo, especially in contrast to the harder edge of Grifter, but I fear this may be one of the first casualties of the new 52 unlike the sex appeal factor catches on quickly with male readers.