While most of the Bat-books in DC’s linewide relaunch are giving established characters their own ongoing, Batwing cooks up a new hero practically from scratch.

This African continent entry into Batman’s new Incorporated franchise appeared in just two issues prior to Flashpoint, which makes him a relative stranger to readers. Can DC-U veteran and original Real World cast member Winick make Batwing worthy of his own title? 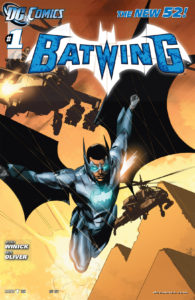 #140char Review: Batwing #1 is gripping & bloody w/stunner painterly interior art, but the tale of African national intrigue only fun when Bruce is on-panel.

Batwing #1 boasts some of the most remarkable art of the first week of relaunch, and for that reason alone it is worth a browse. 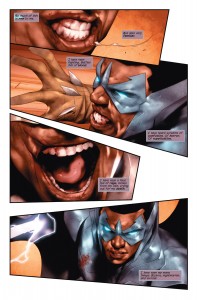 Ben Oliver’s figures and environments are at once ultra-realistic and slightly hazy. The effect is likely the result of an ink-wash, but it evokes the sun-baked Congo landscape where the story takes place. It is criminal that the average cover doesn’t reflect the interior artwork.

The story is something more subtle. Winick pens rookie Bat-franchisee Batwing as stoic and dedicated, but emotionally removed. What might be a faithful representation of the Democratic Republic of Congo is a unfamiliar and vicious setting. There isn’t the comfort of spandexed sidekicks and green-haired Jokers here – regular men (and even police officers) prove to be as chaotic and murderous.

While Winick’s pacing is a bit decompressed, you won’t mind thanks to the stunner visuals and a relatively layered plot.

The real question about this book is – do you want to read this story? It has the potential to be a powerful drama, but the grim reality of the real-world setting might be a turn-off. I say, hang in for the artwork and the twist on the murdered former hero that sets Batwing’s investigation into motion.

Previous Post: « DC New 52 Review: Men of War #1
Next Post: Awake and Asleep with Taxicab Racers, and other stories »