You are here: Home / Personal / topics / thoughts / only you can prevent our transformation into a society of unthinking automatons that will be subsequently infiltrated by shapeshifting alien robots

I want you all to engage in a minor social experiment slash disruption with me for the rest of the week.

One of my vows in life is to answer completely and honestly when relative strangers and vague acquaintances inquire “how’s it going?” or “how have you been?” 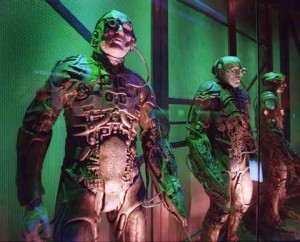 "A neural transceiver is required for maximum communication. Why do you resist? We only wish to raise quality of life for all species."

I know that these are meant to be comforting, routine, call-and-response queries. Just like saying “amen” in church at all the right times, they’re not supposed to be about meaningful engagement. More like a rote reply to indicate you’re awake and semi-functioning as a human being.

Except, would any of these routine queries actually screen me out if I was a shapeshifter, robot, or alien in disguise? No. These are the sort of rudimentary things you would learn in “Infiltrating the Society of Those Meddling Humans 101.” Said infiltrating shapeshifter/robot/alien can respond in one of three ways:

Advanced students may also learn to deflect by griping about the most recent loss by a local sports club, but that would indicate an unusually high sensitivity to human culture that would be better used to infiltrate a more nuanced medium, like cable news. 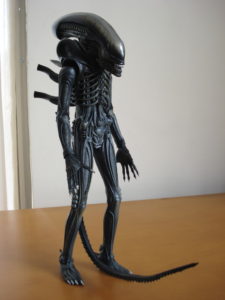 "I'm through with the Philliessssssss breaking my heart."

It’s not just that these “testing for humanity” queries are not doing their job – they’re actually doing the opposite. They are dehumanizing us. They are meant to turn us into a society of undifferentiated call-and-response automatons.

I refuse to play this daily charade, and invite you to join me in my protest. For the rest of this week, if a semi-stranger asks you one of these routine queries, respond with a unique insight into your life.

It doesn’t have to be lengthy, or revealing. Just tell them something they’re not going to hear from anyone else. Today my reply is:

I’m feeling very optimistic, because I put a lot of big things into motion yesterday at work and at home. I hope today is as awesome. Plus, I get to play two great new songs with my wife’s band tonight at rehearsal!

Will you join me in my crusade? As a side effect, we’ll be making our culture more resistant to infiltration by shapeshifting alien robots.