I did not have many must-do items on our itinerary. Just one, really. 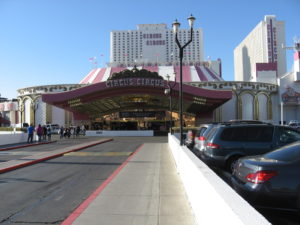 I am a huge fan of Hunter S. Thompson and Gonzo Journalism, and one of my favorite books is Fear and Loathing in Las Vegas. Many of the locations from the book have since been demolished or converted into something new, yet two significant ones remained: The Flamingo and Circus Circus.

As luck would have it, we were staying at The Flamingo – the scene of Thompson’s freak-out trip and his attorney’s accosting of a hapless maid turned informer. I gleefully read these passages to E, who shook her head in a mixture of bemusement and disgust.

The other intact monument to the book is Circus Circus, a casino complete with its own trapeze act and merry-go-round bar. Since the casino is farther north on the strip, it wasn’t somewhere we would idly walk past. We had to plan a day around it.

We finally arrived on day four of five, fresh from our arial adventures atop the Stratosphere. Circus Circus looked exactly how I pictured it – a low dilapidated facade dominated by an eery neon clown. 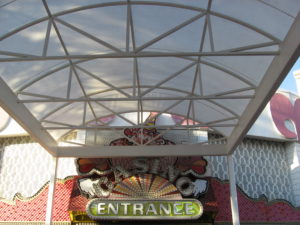 I don’t know what else to say, really. The merry-go-round bar that Thompson mercilessly ejected his attorney from now serves pretzels and sorbet, and the acrobat show is a purely family-friendly affair with no rabid wolverines in sight.

I thought the Circus Circus revelation was pretty much the final nail in the coffin of this trip for me. It represents the ultimate disappointment of Las Vegas. Everything here is an illusion or a faded recollection. Everything needs the night air and a neon facade to brighten the corners of an otherwise dismal and callous place.

(Then my travel companions brought a bottle of champagne on a roller coaster and we had a major dance party to an 80s cover band, which helped reduce the Circus Circus disappointment to merely an amusing sidebar to the best day of our trip.)