You are here: Home / Amanda Palmer and the True Fans

On Monday it was Amanda Palmer’s birthday. 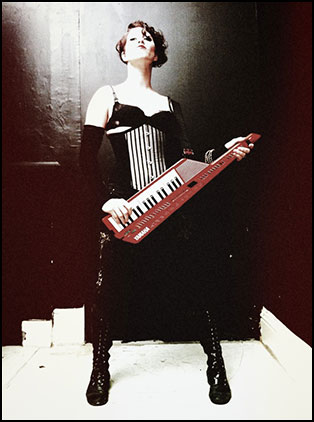 Amanda Fucking Palmer holding a keetar. Note how she and Lady Gaga are in many ways the same person.

I have written about Amanda before. She was half the astounding Dresden Dolls before she released a frankly stunning and sadly slept-on solo album, Who Killed Amanda Palmer? and then got intentionally dropped from her label, meandering off to make an album as half of a conjoined twin act, marry Neil Gaiman, and then dabble in the world of ukuleles and Radiohead cover songs.

It’s not the most linear or discernible path for an artist to take, but somehow Amanda not only makes it work, she acquires more new fans at every turn. Not just casual fans. Insatiable, intelligent, invested true fans. I say it is because she is so indelibly real, even when she is being completely ludicrous.

Back to her birthday. It was Monday, and it marked not only the start of another year in Amanda’s life, but the completion of recording a new album with her band Grand Theft Orchestra.

She made the limit in seven hours. By the next day she had a quarter of a million dollars. At the end of day three she currently sits at the $400,000 mark, with four weeks of fundraising to go. There is an honest chance that Amanda Palmer may briefly become a millionaire before she creates all of the albums, art books, and USB record players that go with the campaign and travels the world with Grand Theft Orchestra to share her new music – and that will be a million dollars well spent.

I gave almost immediately, mostly out of principal. Based on the past few ukulele things I thought the record would be weird and indulgent and I would just be satisfied that I am supporting an artist I admire.

Then I watched this Kickstarter commercial, rife with clips of new songs … every single one of them amazing.

Now I have not only pledged in exchange for music, but I am going in purchasing an Amanda Palmer House Party for Philadelphia, which means after seeing her four times as the Dresden Dolls and two times solo I am now going to see her in a living room with about three dozen other people sitting on the floor.

(Not only that, but she inspired me to shattered a long-running streak of writer’s block, and I already have two peculiar new songs to show for it.)

Amanda Palmer isn’t operating from anyone’s model but her own, and she breaks the mold every time she dreams up a new project.

She is the new music industry. We are the media.