You are here: Home / Personal / off-topics / family / occupational hazards of fatherhood (part 1 of many) 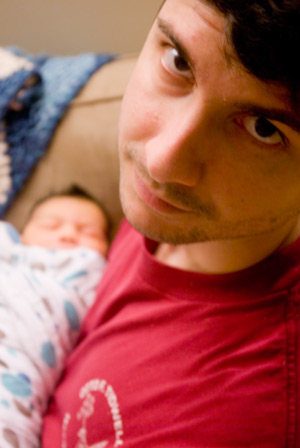 On day three, prior to the formation of my “always hold head to right” bad habit.

I have sustained my first child-rearing injury.

I have spent a lot of time holding our daughter because, duh. And also because a two week old baby really deserves to be held by real humans with beating hearts as much as possible rather than be relegated to a carrier or a swing (although those alien bobbing-and-weaving pod swings were looking really tempting on day three when the only way she would got to sleep was with vigorous and continual swinging).

It’s that beating heart that got me in trouble. Not metaphorically, either. I noticed – or, at least thought I noticed, it’s not like I did an extensive empirical study – that it was easier to swing her to sleep if her head was over my heart. I’m sure that enhanced newborn hearing can probably pick up my heartbeat from the other side of a chest, but when you have a week old baby and have discovered a method that may be giving you even 1% extra efficacy in stopping her from crying you just do it like a fucking Nike ad.

Of course, always holding her with her head to the left creates a cascade of other behaviors. My left arm and shoulder remain slightly weak from my pre-CK collarbone break, so I lean ever so slightly to the right to compensate. Similarly, I have to crane my neck sideways and then down to peer into her eyes – which, even if not deployed in a constant, doting fashion, is necessary to tell if I have successfully ensleepened the baby in my arms.

(Yes, I made that word up. Is there a better verb for causing another person to go to sleep that isn’t “knocked out” or “roofied”? There’s a whole other post rolling around in this head about words and concepts it is probably wrong to apply to your baby due to their adults-only context, but like seeing lightning strike, you kind of have to write them down as you are saying them because they would never occur to you in any other context.) 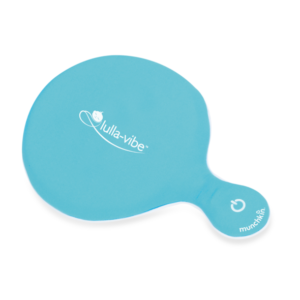 The Munchkin Lulla-Vibe Vibrating Mattress Pad.  Because what the world of child-rearing was missing was a combination vibrator/whoopie-cushion.

I’m sure there are a hundred other little bodily ticks I’ve been performing to compensate for holding her on the left side of my chest. Understandably, I developed a little twinge in my back as a result, but it wasn’t enough to stop me from holding her or going about my life.

That is, until about two o’clock yesterday afternoon, when in miming my utter fear of dogs for Ben at the office as part of my argument against office pets I tweaked my neck a little bit wrongly and all of those little ticks enacted one big portion of revenge on my levator scapulae muscle and I had to go lie on the floor in our nap room for twenty minutes before I could use a keyboard again. 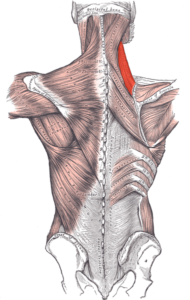 The Levator Scapulae is shown in bright red, which also indicates the area of my white-hot blinding pain.

I’m pretty tough when it comes to pain that I know isn’t resulting in one of my organs exploding inside my body, so I just jammed a few thousand mg of ibuprofen down my gullet and continued managing accounts.

Except, by the time I got home it wasn’t just a little back and neck ache. It was a paralyzing back and neck PROBLEM. Like, I tried to take the car out and almost rammed it into the telephone pole at the end of our driveaway because every time I turned my head to look behind me I wound up turning my entire body with it, along with the wheel.

This culminated in a depressingly amusing sequence where I was in too much pain to hold the baby or move or sit up on my own, so I laid on the floor and we attempted to drape her strategically across my body as a sort of counterweight slash organic heating pad. I was physically incapable of providing her any assistance with sustenance, changing, or comfort. If she was my organic heating pad, I had been reduced to her organic mattress.

I’m happy to report that the searing pain (which I’d say reached about a 7.5 on my pain scale) has retreated this morning, as evidenced by my sitting in a chair and using a laptop, but that took hours of heat and ice and excruciating stretching and equally as excruciating not holding my baby.

(This is just one more situation where (a) I have realized that parenting is incredibly hard physical and mental work and (b) I have no idea how people do this themselves or mostly themselves with a partner who can’t or won’t make the time.)

I’m sure this is just the first of many injuries I will sustain while parenting, and  it maybe explains my friend Chaz’s obsession with becoming a powerlifter post-baby – that way, a little child-cradling will never even approach his threshold for muscle annoyance. Despite being a rather harrowing 12-hours, I’m not sure it’s going to drive me to join CrossFit. If anything, I just think the next time I muster up the strength to hold her I might appreciate the privilege a little bit more.

Oh, and I’ll start alternating sides of my body every hour.