Marvel Comics prides itself on the fact that its stories matter and always will – no major reset or reboots to maintain a set status quo.

If there’s one Marvel hero that doesn’t quite apply to it would seem to be Spider-Man. There’s a feeling among both fans and creators that Peter Parker works the best when he’s a young underdog whose life is full of mistakes and missed changes. Spider-Man is no fun as a perfect guy with a great life that’s protected by thick plot armor. It’s more fun to root for him because things go wrong so often in his life.

That feeling is why so many of Spidey’s cross-media appearances focus on him in high school and college. It’s why Marvel launched an Ultimate Spider-Man that replayed Parker’s origin in the context of the 2000s, and surely a part of him being eventually shuffled to the side for a younger model with Miles Morales.

Back in the main universe, that feeling eventually caused one of Marvel’s biggest retcons ever: erasing Parker’s longstanding marriage to Mary Jane to restore him as a romantic lead and youthen him as a character. Spider-Man definitely surged in popularity in the ensuing years, but many long-term fans never returned as readers. 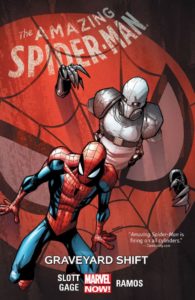 I don’t really have a dog in that fight, but reading Dan Slott’s recent Spider-Man run has me thinking about Peter Parker the underdog, because Slott seems so intent on giving him his due. He’s the CEO of his own company! He’s approaching Tony Stark levels of outwardly expressed genius, and Stark is rarely an underdog.

How does that play out in the final Spider-Man collection before Secret Wars?

Dan Slott is amazing at sticking the landing of the crazy concepts he puts Peter Parker through. Everyone turns to spiders! Doc Ock takes over! Every Spider-character ever is hunted down! Yet, here he’s not great at running down the clock on the verge of Secret Wars interrupting his run, even with the assistance of frequent co-writer Cristos Gage.

Slott and Gage spin a pair of parallel tales in this three-issue run. In one, former Thunderbolt Ghost breaks into Parker Industries on the eve of their big reveal of a new prison for powered villains. In the other, Black Cat ponders why her good luck is on suck a winning streak as she regrets losing the trappings of her former, less-villainous life.

That sounds great in summary, but in practice it’s unsatisfying. So many villains have broken into and knocked down Peter Parker’s last few places of employment that I’ve lost track of how many times it has happened – especially because this plays out the same almost beat-for-beat! Ghost’s powers and personality set offered a chance to do things differently – he’s got no specific beef with Parker or Spider-Man, and he can be both terrifying and almost childlike in his naiveté. Slott and Gage miss the mark on that characterization and he winds up just another merc who is more a hacker than a fighter.

Meanwhile: Black Cat’s growth into Manhattan’s biggest crime lord in the wake of the Goblin Army has been an interesting progression, but she’s wasted here as she basically performs the same monologue about how being bad to the bone is great for her luck in various rooms to various henchmen and captives.

Making both plots even kludgier is that they’re being presented separately as A and B stories, rather than intercutting between them, which might given each some space for dramatic tension. Instead, it feels like Slott is filling space with the least disruptive story he could muster after the major shake-ups of Spider-Verse (which get about two panels of mention). Why not just skip these three issues before a re-launch rather than phone them in? Or why not tell a more subtle story of Peter getting his life back as Silk wisely chose to do before Secret Wars interrupted it?

I’ve never been a fan of Humberto Ramos’s deformed-anatomy style of artwork, but I can appreciate it when it’s used to strong effect. He gets in some solid panels here – the interior of Parker Industries is particularly good – but there are too many gawky moments that pulled my focus. Action is hard to follow. Spider-Man and Ghost are so distorted it’s hard to read them as humanoids. Ramos seems to have trouble with proportioning women other than Anna Maria (who I think is his version of “stout”); Black Cat’s waist gets spindle-thin at points.

Despite all that slagging, there are a few interesting points here – all from the supporting cast of both creators and characters.

On the character side, Anna Maria Marconi continues to be Slott’s gift that keeps on giving. She is hilarious and seemingly infallible in correcting Peter’s sloppy cover-ups for his Spider-behavior now that Otto is no longer lurking underneath. As satisfying Anna Maria was playing hero with Clayton Cole at the close of this story, I think that brash confidence could lead to some undoing in the next volume. Also, Peter’s co-founder Sajani Jaffrey continues to play an effective straight-man to his hijinks. Instead of seeming shrill, she’s almost the Greek Chorus as stand-ins for the audience. It really helps that she has great instincts and isn’t just a killjoy.

On the creator side, I’ll point you to the Annual that was unceremoniously dumped at the end of the collection (though it clearly occurs before the main story). The A-story Sean Ryan is a bit simplistic (Spider-Man wants to return something that’s lost), but it comes with stunning artwork from veteran Brandon Peterson. Seriously, this must be seen to be believed. Peterson’s recently work has been mixed media, with some penciling and some digital creations. Here, the digital is actual landmarks and panoramic backdrops from NYC with illustration seemingly drawn directly over photos with hand-drawn characters layered above. The effect is part Michael Lark, part Mike Deodato – I love it! A shorter backup by Jai Nitz and Ron Salas is equally as enjoyable, evoking shades of Nick Spencer’s Superior Foes of Spider-Man.

Bottom Line: This is for spider-obsessees only – anyone else can be satisfied with the conclusion of Spider-Verse as the last stop before Secret Wars. That also means you can pick up the Spider-Verse OHC rather than the less-comprehensive Amazing Spider-Man, Vol. 2 Oversized Hardcover (which unhelpfully omits the annual, anyway).

Collecting Spider-Man? View this collection in context in my Spider-Man Collecting Guide and Reading Order.