On the topic of wild animals acting on basic instincts, those of you who have been reading for a long while know that the combination of my mother and I quickly gets riotous. This can be good or bad depending on which way the riot breaks and if either of us can exit the situation of our own free will. 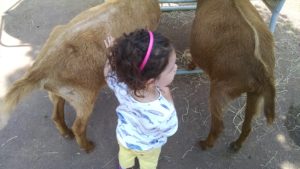 Traveling with a pair of wild and wildly-compulsive hand-washers leads to a lot of consternation about if you are petting the goats too close to their butts even if it’s already a known constant that you will be washing your hands as soon as you are done petting the goats no matter how much butt-touching you elect to engage in.

Thus, a fitting backdrop to play out this drama would be an actual zoo. And, adding to our inability to escape each other, not only were we both there to enjoy the company of a certain toddler, but my mother has been recently only semi-mobile as she recovers from an operation and so spent the majority of our time confined to a small, motorized scooter.

(I don’t mean to imply that motorized scooters are themselves hilarious – they exist for a very good reason, and many people don’t have an option as to whether they can use them or not! Actually, I really appreciate that the zoo not only has them for rent but has found a way to make just about every exhibit physically accessible – both outdoor and indoor. The ableist privilege I enjoy in life that means I’ve never really noticed that before, but there was no other way I could have made this memory with both my toddler and my mother. It’s something I’ll now always see in a different way having experienced it.)

The Mother of Krisis is not the sort of person you want behind the handlebars of a small motorized conveyance that has a little knob to set its speed, no seatbelt, and beeps when you back it up. Drivers and bikers are so used to mitigating speed with their gas and brake that it’s a real shocker to have to use your hands to adjust. We almost experienced a rollover on an incline she took at too slow a speed! She looked to be constantly on the verge of tumbling out of it, and by the end of the day I think she was maliciously beeping it at children purely because the high frequency of it seemed to itch their ears more than any adults.

Honestly, I think they ought to have some kind of licensing exam before they hand over the keys. To her credit, she was great at parallel parking it next to strollers whenever she needed to stand up for a few minutes.

Talking about my mother hamming it up on her scooter buries the lede a bit, in that just a few days before a child not too much older than EV slipped into a gorilla enclosure at the Cincinnati Zoo, which ended in injuries for the child and the extremely unfortunate death of the gorilla.

It’s incredibly easy to be judgmental when you read a story like that and say something like, “Where were those parents?” or “They should have shot the kid!” especially considering the gorilla had done nothing wrong and was of an endangered species. The thoughts crossed my mind. It’s not like my mother ever let me fall into an animal’s lair.

Still, I was more vigilant than ever about hand-holding with EV than I typically am (which is already pretty darn vigilant).  Yet, I was also minding a doddering, scooter-bound, actual crisis of a Mother of Krisis. In the ensuing chaos, EV managed to slip away from me at an exhibit. It was the giraffes. I was juggling her at the railing while talking over my shoulder to my mother, who was trying to stand up to see better. I don’t recall exactly how it happened, but I think I set EV down to get a better grip on her and within the span of a second she slipped my grasp.

Quite suddenly was between the railing and the exhibit wall, which she was peering over for a better view. If she was a few inches taller she could have easily boosted herself up and then fallen over into the enclosure. It would have only taken another half second.

(And before you say, “Well, yeah, but they’re giraffes,” they have both a powerful kick and stomp that can shatter a skull in one blow. All wild animals can be dangerous.)

In a split second I had my arm around her chest to scoop her backwards and back to the other side of the railing, but in that moment I could have easily had a child being dragged around by a well-meaning gorilla. Instead, she giggled as I picked her up, and my mother stepped off the scooter to join us in watching the tallest of the giraffes amble across the enclosure to nuzzle his child.

I don’t actually like zoos. The animals are permanently captive. The people are temporarily captive. It’s likely either too hot or too cold for some percentage of the animals and some amount of the humans. Some of it probably smells bad to the humans, and the humans likely smell bad to the animals. It’s just not a place I associate with positive outcomes. That might not be a fair assessment, first because zoos are an important factor in conservation of all animals – not just the cute ones, and especially since the Philadelphia Zoo has a lot of positives that other zoos don’t have. But I cannot help but be depressed by a giraffe that cannot run at full speed or an ape with a jungle painted on its walls.

Yet, that opinion was formed by me as the protagonist of my own admittedly pessimistic story at the zoo. I had never experienced it through the eyes of a child, or a grandmother, or a disabled person. I keep going to the zoo to make memories with and for EV, but this week I got something totally else from the experience.