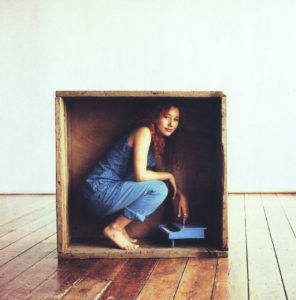 I stopped seeing Tori Amos live because of “Tear In Your Hand.”

It is one of my favorite songs of all time.

It is one of my favorite songs of all time, and after seeing Tori Amos five times she had played it at every show. When the next tour rolled around, I couldn’t bear the thought of seeing her and breaking the streak.

(Of course, that was probably her best tour since 1998. And she did play “Tear In Your Hand” in Philly. Oh, well.)

I cannot entirely explain my fascination with “Tear In Your Hand.” It’s not the most memorable song on Little Earthquakes, by far. Yet, it has a hypnotic quality to its constantly circling chords that draws you in and than keeps you spiraling.

Tori redraws the same piano figure again and again – a B suspended fourth to major to suspended second that then puts the fourth in bass for the same figure and returns back to the top – as she rambles through a stream-of-consciousness that starts when all the world just stops and rambles through reading Sandman comic books, liking the same ice cream as a serial killer, and how that other girl might just be another side of herself.

I think the entire song exists in that stopped-world moment. He says he doesn’t want to stay together anymore, and as she takes a deep breath he touches a hand to her cheek to wipe away the first tear and when he does her life just flashes before her eyes in an instant, like a forever dream sent from Morpheus himself. 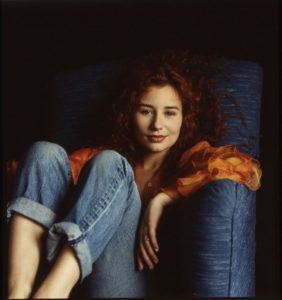 Meanwhile, the arrangement is a beautiful puzzle of pieces tugging at your ear drums. The sighing backing vocals are pulled right from “Crazy For You,” while a chugging woody bass sound hints at indie rockers like R.E.M., and the increasingly intricate tangle of guitars begins to obscure the initial piano line – plus, the headbanging bridge, one of the hardest rocking moment on Little Earthquakes.

She knows him better now than she used to, and she knows it never could have been – even if that other woman is just the pieces of herself she hadn’t yet revealed. And so it’s time to say goodbye.

I don’t think it’s a marvelous song, especially without Steve Caton’s beautiful guitar arrangement. Yet, there’s something undeniable about its unspooling narrative that became synonymous with seeing Tori Amos live, and I’m half afraid she’ll skip and half afraid she’ll do it and that fragile magic will be gone.

Here’s a 2005 live version from VH1 – perhaps its only major TV broadcast: