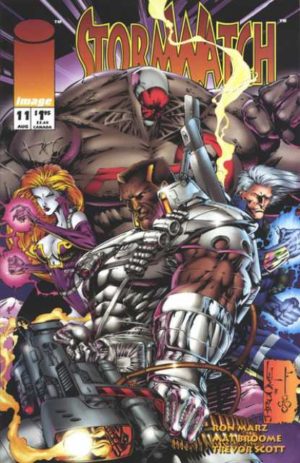 That’s the maximum lifespan of Battalion and Diva. While there is always the chance for a late-stage bait and switch in comic books, seeing them both dead in #25 seems to drive home that the fate will be inescapable for at least one of them. Every moment is filled with danger – you half-expect everyone to explode into a million pieces just for talking.

This trio of issues is about politcal intrigue, both within Stormwatch and from outside of it via the UN Executive council. They’realso our first stories focused on the taciturn Winter and the underused Hellstrike. We begin on Stormwatch One (Battalion, Diva, Fuji, Winter, and Strafe) mopping up Russian rebels in Siberia, which the council seems to take extra glee in interrupting to call a spur-of-the-moment meeting on sanctions for Battalion’s actions in Gamorra in issues #6-7 and in Japan in #10.

In the wake of the meeting (and Weatherman’s dismissal), Winter will have to return to quell the remainder of the conflict while others work desperately to prevent Hellstrike from blowing up all of SkyWatch!

Ron Marz has a firm grasp of the team and their personalities. He intercuts more nimbly between stories that Choi, which puts almost the entire Stormwatch cast into play in these issues. Finally, all of the various energy-projecting dudes are starting to feel distinct from each other!

Specifically, Cannon settles into being a decent guy with a hot-tempered streak, whereas Flashpoint is full-on awful (though, that could simply be Defile’s torture via Deathtrap working as planned). Sunburst is mostly silent until a final scene of him transmitting details of the WildCats to Defile. However, the women are given short shrift – Diva remains a cardboard cutout of a reliable #2, and Fahrenheit and Nautika are complete cyphers.

Fuji has been the source of so many low-key laughs along the way so far that he’s the perfect character to deploy to lend depth to the shallow Hellstrike’s medical challenges, which I had honestly forgotten about since #7. Things really do grind to a halt in #12 for a deep dive into Hellstrike’s psyche – not only because he’s a fringe character in this drama, but because #25 gave us no hints of his relevance to the longer plot line. It’ll be interesting to see how his transformation into a being of pure energy like his colleague Fuji will affect Stormwatch in the long run.

Winter proves to be a more satisfying point-of-view character, as he’s come through for the team so many times in the series so far. While his Cold War enemy is straight from a standard-issue Iron Man plot, seeing Winter pushed to his limits both as a super-human and as a leader is satisfiying. 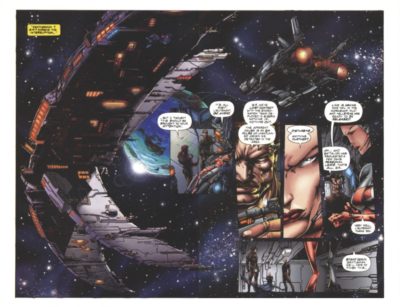 Meanwhile, the twist of letting go our bald-headed Weatherman, named Henry Bendix, is a shocker … but not as much of a shocker as Synergy taking up the mantle, complete with the shaved head! Even with the preparation of knowing she was Weatherman in #25 doesn’t prepare you for the abruptness of the change.

New artist Mat Broome takes only a few pages to settle into his take on the team. He draws a ridiculous, hulking Battalion. seriously, he is almost as big as Hulk!

On the whole, his pencils are satisfying and still of the caliber you expect from Image. All of his faces have a slightly pinched quality, but he’s good at expressions that sell the dialog – a pretty rare delight from a 90s superhero artist. Also, the digital coloring makes a leap forward here, with some complex shading and gradient skin tones.

Taken on their own, this trio of issues could fairly be called Stormwatch’s weakest arc so far. However, in the context of the grander story being told, these stories provide some essential context and humanity for characters beyond just Battalion – suddenly necessary, with his death looming over the book. Marz and Broome successfully maintain the tone established by Choi and Clark as our countdown to doom ticks inexorably forward.

Here’s the schedule for the rest of this month’s WildStorm re-read – tomorrow we add a new title to the mix Whilce Portacio’s Wetwork’s #1-3!