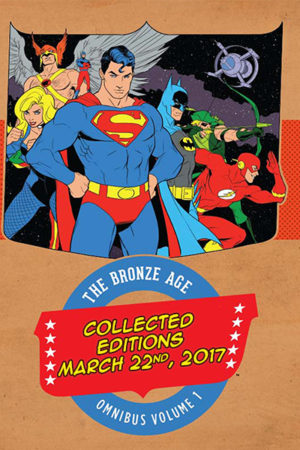 So, what’s out this week? It’s not an easy question to answer. While DC and Marvel keep a relatively consistent schedule, other publishers aren’t as consistent – in fact, this week we have a pair of books originally professed to be out a month ago!

This post covers all of the collections out this week, explains what they are and what they contain, and provides easy links to Amazon, where you can either buy them or at least get more helpful info like their prices and ISBNs.

None of the major label releases this week are particularly interesting to me (unless, of course, you’ve been waiting with baited-breath for some Bronze Age Justice League!).

However, one that caught my eye was The Interview by Manuele Fior from Fantagraphics, thanks to this description:

Set in 2048, The Interview is a science fiction novel from the author of 5,000 km Per Second that eschews outer space for inner space. It is a moving story about the passage of time, the commonalities and differences between generations, and on our changing society. “I tried to imagine the near future,” says the author, “where not everything is negative and catastrophic, where the end of the world does not come with a violent apocalypse, but rather an intimate and familiar context of daily life that keeps flowing.”

What else is out this week? Keep reading to find out! 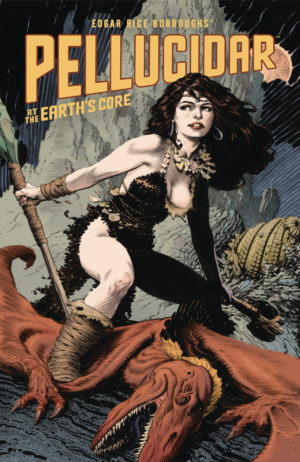 Dark Horse collected editions generally hit the mass market two weeks after the direct market, but some of their media tie-in properties get a same-day release in both direct and mass markets.

Art Of Mass Effect Andromeda hardcover – This is out the same day in direct and mass markets.

Danganronpa: The Animation, Vol. 4 – A continued adaptation of  the Danganronpa anime TV show. This may be delayed a week (though that’s not the case in Previews), as it has a April 11 mass market date. Start with Volume 1.

Mass Effect Adult Coloring Book – Featuring art inspired by the Mass Effect trilogy as well as the upcoming Mass Effect: Andromeda. This is out the same day in direct and mass markets.

DC Collected Editions hit the mass market one week after the direct market, so these books are available from Amazon on March 28. See Crushing Comics – Guide to Collecting DC Comics for more on DC’s collected editions. 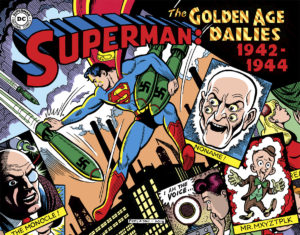 DMZ Book 3 – A new paperback printing of Brian Wood’s DMZ to match the previously-issued hardcover set. Collects DMZ #29-44. Book 1 and Book 2 were out in 2016. If you’re tempted to go for the hardcovers instead, note that some of them are out of print and rather highly-priced.

Superman The Golden Age Newspaper Dailies: 1942-1944 hardcover – Really released by IDW, who handles DC’s archival newspaper strips. includes all strips from February 16, 1942 through October 28, 1944. This is the first Golden Age collection of Superman’s newspaper strips; the Silver Age was previously collected in three volumes in 2013-2014.

Donald and Mickey: The Persistence of Mickey – Collects Walt Disney’s Comics and Stories #733-735.

This title really could be Civil War II: Ulysses since it collects Civil War II: Ulysses #1-3 following the story of the Inhuman who incites the unrest between heroes. However, there’s hardly anyone in the comic-buying world who is interested in that, so Marvel re-christened this collection as “Fallout” to reflect the three one-shots it contains one-shots The Fallen, The Accused, and The Oath. The former two deal with an event that occurred only halfway through CWII, so they’re hardly a shocker. Yet, the final issue – The Oath – sets up Marvel’s next event, Secret Empire.

My recommendation is that unless you are a Marvel Completist you simply pick up “The Oath” digitally.

Deadpool’s mini-series can surprise you. They aren’t all inessential cash grabs, and a lot of them have free reign to be a lot more hilarious than his ongoing (which has to maintain some semblance of ongoing plot). While I’m not familiar with writer Joshua Corin, artist Todd Nauck has been a solid artist in the Bagley tradition on titles like Nightcrawler.

Plus, the plot of this does sound amusing – someone is hunting down former Marvel D-listers turned big stars like Squirrel Girl, Rocket Raccoon, Groot, Ant-Man, and Howard the Duck – and only Deadpool can save them!

See Guide to Deadpool for more. 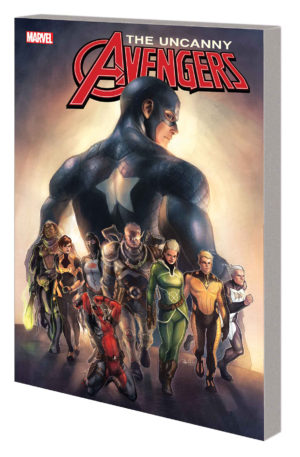 In terms of Iron Fist continuity, this book is the first Iron Fist material to follow his apparent death in Power Man and Iron Fist and it precedes BLAH. It’s a little puzzling that Marvel didn’t include a handful of addition Namor issues or excerpts here to bridge the story of Danny’s return from the dead.

Note that Night Raven is from a Marvel UK prior to the 1990s widening of the line that brought us in-continuity characters like Dark Angel and Death’s Head II.

While his artists haven’t been their best ever on this run, Duggan has pushed this X-Men/Avengers (now +Inhumans) mash-up concept farther than Remender did before him, emphasizing the crystalline interplay of these heroes with each other and the wider Marvel Universe. With the majority of the other Avengers and X-Men team books meandering through All-New, All-Different Marvel so far, this is probably the one to be picking up to feel like you’re in on the big moves by Marvel’s biggest team.

Lots of Wolverine/Punisher fights… what’s the big deal? It’s not only that Damaging Evidence is collected here for the first time, but the subsequent pair of full Wolverine/Punisher mini-series, which previously have been available only in costly old trade paperbacks. None of these tales is particularly memorable, but if you enjoy this pair of characters this is a pleasing collection of two decades with of their interactions.

Want more Wolverine? The Guide to Wolverine includes his every appearance.

Real talk: This exact material (less the Wolverine story) is available in two other formats, one of which is the X-Force Omnibus. Said omnibus is presently on clearance from Marvel and can currently be had for less than the cover price of this collection! If you’re building out your Epic shelf, by all means pick this up, but if you just want a hunk of the X-Force stories you remember from the 90s for around $40 you ought to pick up the Omnibus – especially since a second volume has been announced for the Autumn!

See the X-Force Guide for the many ways this run has been collected.

Selected Collected Editions from other publishers for March 22, 2017 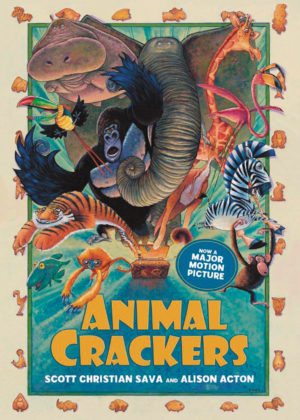 Animal Crackers hardcover OGN (:01 First Second) – Like a junior version of Animal Man, this is the story of a boy who can eat animal crackers to turn into a host of powerful creatures – and he does just that to rescue his sister and expose the animal abuse of a circus.

Animal Crackers: Circus Mayhem hardcover OGN (:01 First Second) – A prequel to the main Animal Crackers hardcover that focuses on our hero’s discover of his magical crackers!

Best There Is What He Does: Examining Chris Claremont’s X-Men (Sequart) – I’ve now had multiple folks I trust recommend this tome – a literary-minded, issue-by-issue examination of Claremont run on X-Men. You can read some of his blog posts on the subject freely on the web. PopMatters ran a flattering review that still asked a challenging question – why spend hours reading this if you could spend them reading the actual books? I always agree with this sentiment – if you’re looking for more than a minute-long summary of a comic, the best remedy is to read the damn comic (and, if you haven’t, you can gain access to this entire run on Marvel Unlimited for less than $10/month). However, if you’re already familiar with this Claremont material, reading a scholarly take on it is a great way to re-experience the story.

Caped Crusade: Batman & Rise Of Nerd Culture (Pocket Books) – This book’s Batman-centric description doesn’t square with its title, which seems to indicate it will chart the rise of the Nerds alongside Batman’s long and winding history.

Doctor Who: The Eleventh Doctor, Vol. 5: The One (Titan Comics) – To clear up a confusion I had, Titan is releasing series for the 10th, 11th, and 12th Doctors simultaneously, and they’re all around the same point. The big draw here is the writing, buy Simon Spurrier and Rob Williams.

Grimm Fairy Tales Steampunk (Zenescope Entertainment) – This solicitation helpfully includes no collection information (seriously, do they want people to buy it?), but it seems to collect Grimm Fairy Tales: Steampunk (2016) #1-2. 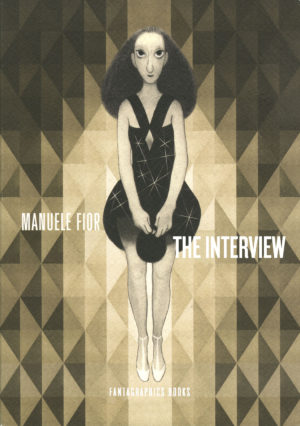 How He-Man Mastered The Universe Toy To TV To Big Screen (McFarland & Company Inc) – I’m a major sucker for these “behind the scenes of the media property you love” sort of stories, and when it comes to properties that dominated across all forms of media He-Man is one of the best examples of the 80s. However, from the excerpts I read this seems less like a behind-the-scenes reveal with exclusive access and more like a well-sourced blog. YMMV.

The Interview OGN hardcover (Fantagraphics) – This Manuele Fior near-future tale is definitely the most-intriguing release of the week for me!

Monika Volume 2 – Vanilla Dolls (Titan Comics) – I’ve digitally paged through the first half of this, Monika: Masked Ball, and the interior art absolutely holds up to the striking covers. Guillem March is definitely better-suited to this genre and the beautiful, painterly colors than he is to Marvel and DC comics (notably, Gotham City Sirens), where the bold digital colors can make his figure work look unnecessarily busy.

Rust Vol. 2: Secrets of the Cell paperback (Archaia / Boom! Studios) – A paperback collection of this series, which was originally out in hardcover starting in 2011. Pick up Volume 1.

Take That, Adolf!: The Fighting Comic Books Of The Second World War paperback (Fantagraphics) – A Timely collection of the Hitler punching comics covers of the 1940s. No, your eyes do no deceive you – this was scheduled for the week of February 22.

Terms & Conditions (Drawn & Quarterly) – I love the idea of this collection, though I’m not sure if it’s something I feel the need to buy and own permanently. Artist R. Sikoryak illustrates the entirety of the iTunes Terms and Conditions, with each page featuring Steve Jobs in the style of different famous comic books and strips (the cover is Uncanny X-Men #211). The double-edged parody is wicked clever, but when it comes down to it you’re just looking at a 100 drawings … unless of course you were really in the market for an easy way to digest those terms and conditions! This is already out on the Mass Market. 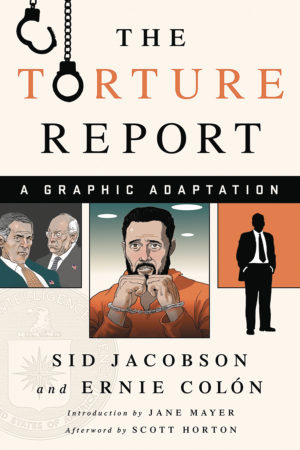 The Torture Report: A Graphic Adaptation Paperback (Nation Books) – I’m fascinated by this book from Sid Jacobson and artist Ernie Colón, which is in the same vein as Terms and Conditions, but in a much more serious fashion. I’ll let the description speak for itself:

On December 9, 2014, the Senate Intelligence Committee released a report that strongly condemned the CIA for its secret and brutal use of torture in the treatment of prisoners during the George W. Bush administration. Using their graphic storytelling method, Sid Jacobson and Ernie Colón have summarized, illustrated, and made accessible that report. Jacobson’s text highlights the key lessons learned from the report while Colón’s talent as an illustrator adds power and poignancy to the facts, infusing them with a sense of immediacy and humanity that is unforgettable.

A Treasury of XX Century Murder Compendium I: Including The Lindbergh Child, The Axe-Man of New Orleans, and Madison Square Tragedy hardcover (NBM Publishing) – An illustration collection of true crime by Rick Geary. Another refugee from February 22.

Previous Post: « New For Patrons: Definitive Guide to Robin(s)
Next Post: Batwoman: The female, feminist, lesbian Caped Crusader you need to be reading »