You are here: Home / consume / comic books / Batwoman: The female, feminist, lesbian Caped Crusader you need to be reading 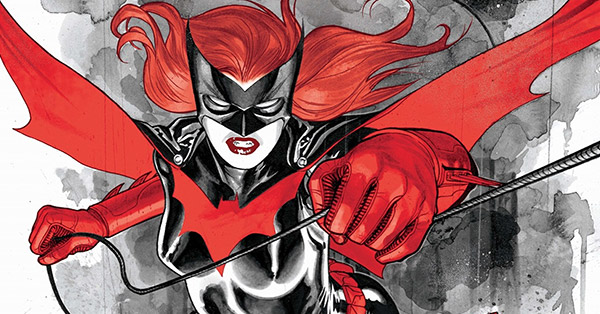 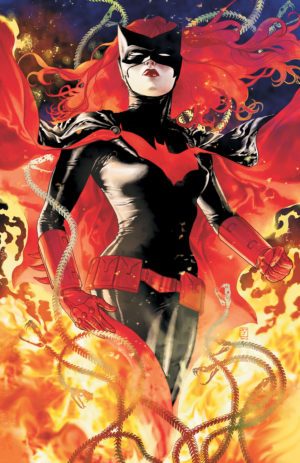 In fact, she has been used sparingly enough that you can easily buy all of her appearances and read them in just a week or two, and she has a brand new series that just started last week!

Why she wears the cowl 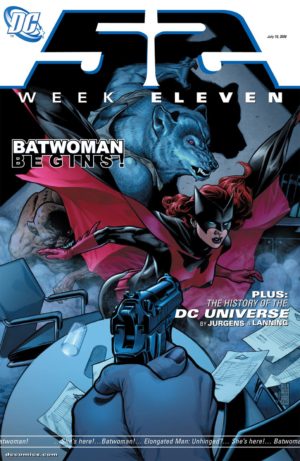 Infinite Crisis ended with DC’s trinity of major heroes – Wonder Woman, Superman, and Batman – whisking away for a year of in-universe time. While every book in DC’s line skipped ahead a year to focus on the new status quo upon their return, 52 was a year-long weekly series that lingered on what happened in their absence.

As you can imagine, Gotham City was in dire need of a hero without Batman on its streets. Sure, there was still Nightwing, Robin, and Birds of Prey, but a lack of Batman leaves an obvious power vacuum. Kate Kane decided to fill the void as Batwoman.

As readers, we don’t initially get to witness her process or even meet her. Much as many in Gotham treat Batman as an urban legend, Batwoman dances around the edges of a story focused on fan-favorite GCPD detective Renee Montoya.

As a result, Batwoman goes several years while never having her own stories, though in that period she serves as a foil and romantic interest of Montoya during her own fascinating journey to heroism.

It wasn’t until after the big 2008 event, Final Crisis (in which Batwoman briefly plays a brainwashed antagonist) that she finally merited her own stories – and they ran in DC’s flagship title, Detective Comics!

Writer Greg Rucka penned Batwoman for a year during another one of Batman’s absences – this time, after Morrison’s Batman R.I.P.. Her opening arc is a knockout stunner with sumptuous artwork by JH Williams.

It also cemented her story as thoroughly feminist.

That’s not just because she’s a woman and surrounded by female supporting characters (the only male in her cast is her father), but because Rucka treats her exactly as a male hero is treated. She is not a paragon of femininity as Wonder Woman is often forced to be (appropriate, as Superman’s mirror), but a complex character who is flawed and fallible (similar to her counterpoint, Mr. Wayne) and not just an accessory or a damsel in distress (though she did play that role for Montoya in her earliest stories).

(Early in Rebirth, she comes to Batman’s rescue in spectacular fashion, pointedly informing him that he’s “the damsel” and that he’s supposed to be grateful to be saved. Seriously. It’s awesome.)

J.H. Williams’ artwork on Batwoman is a revelation. Even if you’ve seen his psychedelic turn in Sandman Overture, his full page spreads inspired by art nouveau artists like Mucha will take your breath away! Even the alternating artists tried to maintain the style. 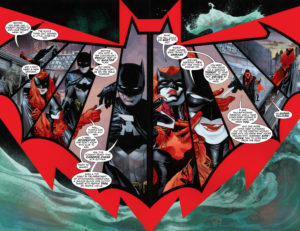 Williams was so taken with the character that he continued her into New 52 in 2011, co-writing a cerebral and gorgeous series with Haden Blackman.

The pair created a different sort of Bat Book with a steady pace and a sombre plot that saw Batwoman fighting myths and urban legends as much as she was fighting against villains.

Unfortunately, the creators walked off the title in 2013 – half due to their plots being co-opted by other books, and half due to DC’s hard line against Batwoman marrying her fiancé Maggie Sawyer.

(For the record, I think marriage would have been stifling for such a new character, but the editorial meddling clearly went beyond that.)

The subsequent run by Marc Andreyko missed the point of Batwoman’s tenuous relationship with the unreal by turning her into a literal vampire and teaming up with monsters. She got a fresh start in Rebirth in 2016 as one of the anchors of the first six months of Detective Comics before graduating back to her own series – this time written by the marvelous pairing of Marguerite Bennett and Steve Epting.

This new Batwoman Guide is my most new-reader-friendly guide to date.

It includes a new “Get Started!” section with suggestions on how to get into the character, plus a short list of Batwoman’s Greatest Hits if you want to catch up to the present day without reading everything.

And, if you’re the kind of person who likes to read everything (“shyly raises hand:), I explain every Batwoman guest appearance so you can decided for yourself which are worth tracking down.

If you’re new to Batwoman I’d love your feedback – and, whether you’re new or not, I’d love to hear what you’ve thought of her so far in Rebirth,