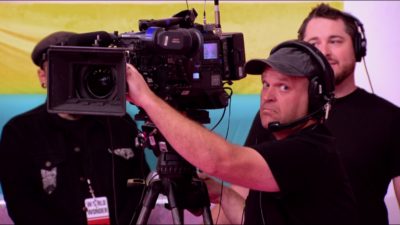 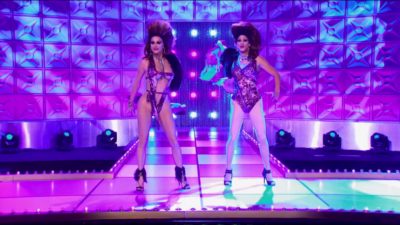 Trinity Taylor is surging towards a strong finish with another solo win for her makeover – or, more accurately, for choreography of which we barely got a glimpse.

It’s always frustrating when Ru awards a win for qualities that weren’t on full display to us during the episode. Still, it’s hard to deny the quality of Rizzo the Set PA’s drag transformation into Glittafah Days – and, that’s not just down to her incredible Taylor family tuck.

Trinity went all out in showing off her body with a Joslyn Fox level of “barely there but for the straps” outfit that you cannot even call a swimsuit, but Glittafah managed to sneak through with a one piece and stockings. What was most impressive about her wasn’t her tuck (which Trinity supervised herself) or her mug (I mean, let’s face it: this is an attractive dude), but her strut. If you take a moment to review the tape, Glittafah is in perfect sync with Trinity at every point of their runway walk.

Sure, he’s wobbling his shoulders instead of walking with a switch and he’s keeping his hips way too square, but if this was a competition just between the crew queens he’d probably win. 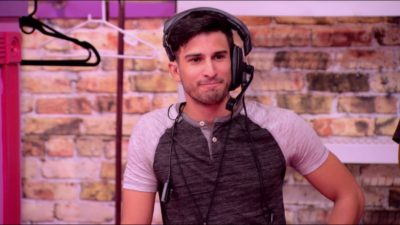 I don’t always have the winning queen in first place because a win doesn’t always equal having the most momentum coming out of an episode. However, for me this win felt like a distinct endorsement by RuPaul of what Trinity has been bringing to the competition – especially because she could have easily given the win to Sasha to cement her place as a late-breaking front-runner.

By delivering the win to Trinity instead, her slot in the finals next to Shea feels very cemented. We’ve seen her succeed with moderate feats of construction already and the judges have never been negative on her fashion, so I expect she’s going to get through next week’s ball easily.

That means her main risk factor is being in the bottom two of the penultimate episode, since there is a chance that she could be knocked off in a lip sync. However, I simply don’t think Ru will put her in that position. This win feels like confirmation that we’re going to be seeing Trinity vy for the crown next month. 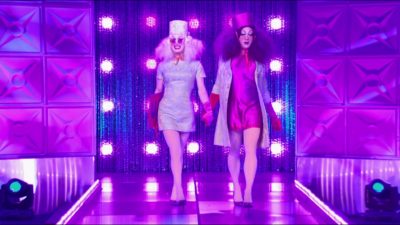 Sasha Velour turned out by far my favorite makeover of the night with the strongest visual presentation, but once again got high marks without winning a challenge.

What does this woman have to do (other than pair with Shea) to win, Ru?!

Sasha’s family resemblance with Dunatella Velour was off the charts, although that’s hardly surprising given her distinctive face. Choosing Duncan was a bit of a gimme – there’s no way Ru’s long time Associate Director is going to be the worst failure in a makeover episode. This man has seen how the sausage is made many, many times, even if he could only barely walk in heels.

Still, even if Sasha gave herself a winning hand with Duncan, that didn’t guarantee she would deliver such a strong performance. Were her sheath dress and three-quarter length jacket two pieces of a single outfit that she simply split up before making Dunatella’s sheath dress? Did she construct any of it? It’s unclear, but in a season when the high glam has been a bit lacking Sasha definitely delivered. 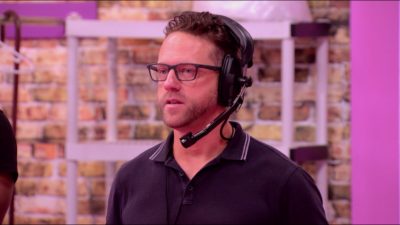 The question of whether Sasha constructed any elements of today’s outfits is a big one given the ball next week. I wouldn’t be wildly surprised to see her in the bottom based on what we saw from her in the princess episode.

That could go either way when it comes to her story arc.

On one hand, finally drifting into the bottom two next week against Alexis (because it’s definitely going to be Alexis) could be the reason for her to be the final sashay in the penultimate episode so that Peppermint makes it to the finals. Despite her multiple high placements, the body of her run hasn’t been the most memorable – and, it doesn’t help that we haven’t had a lip sync from her to latch on to.

On the other hand… we haven’t had a lip sync from her to latch on to. Trinity cemented her front-running status with her merciless slayage of Charlie in the lip sync, and it was Peppermint’s lip sync that gained her a lot of her current fan support. If Sasha absolutely owns her opponent (who will be named Alexis) next week, it could send a clear signal she deserves a spot in the finale against the other killer syncers of the season.

Or, who knows, maybe she’ll get another partnered win next week with Shea! 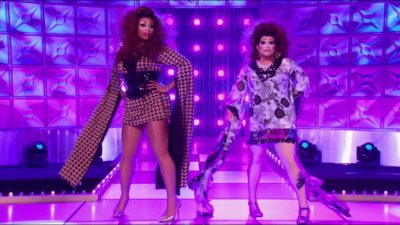 Peppermint continues her late-season renaissance with a third week in the top three of the power rankings.

She got dealt a great hand by Shea and Sasha with Wintergreen, by far the queeniest of all the makeover cast. Sarge the Camera Operator’s pursed lip mug and constant sass on the runway made him more memorable than some of the actual cast members who we said goodbye to earlier this season!

Let’s not give Wintergreen all the credit. Peppermint is a strong make-up artist who manages to succeed on someone who isn’t the same race as she is, which has been a stumbling block for queens in the past. 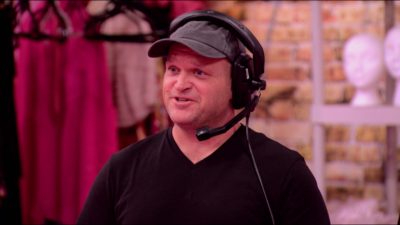 I’m fascinated by Peppermint outfits, which are cute and on-brand for her but couldn’t have clashed more if she tried. And what was with the black corset over Peppermint’s look but not on Wintergreen’s? Anything to tie these two together other than the sleeves would have been a gift. I’m quite sure Peppermint could have snatched this win from Trinity if her look was as complementary as Sasha’s.

Without that win, Peppermint has just as hard of a case to make for getting into the final three as Alexis Michelle with their track records of one win and one bottom a piece. Yet, when it comes to a recency effect Ru is certainly going to have Peppermint’s late-game finesse in mind when she decides on a final sashay in two weeks.

I sincerely doubt Peppermint is in trouble from the ball next week. While some of her fashion choices have been questionable, we haven’t seen her have any problem with construction – her princess look was one of the most intricately detailed in the entire cast. If she delivers a third standout performance in a row, is there a chance Ru might advance her to the finale?!

It would certainly be less of a shock than Pearl making it over Kennedy Davenport two seasons ago, and Peppermint’s story (and performance) (and drag) is worlds more interesting than Pearl’s. 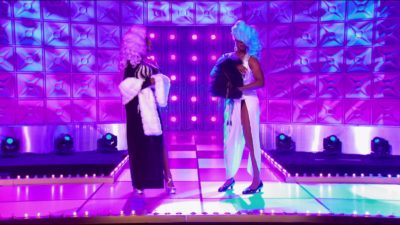 Sasha’s sister Bae Couleé was a tragedy on the runway. A massive swath of her wig kept falling into her face, the slit in her dress seemed rotated to the wrong spot, and she walked in her kitten heels with all the subtly of a baby giraffe.

At first it was hard to believe that a queen as success-oriented as Shea (and with such a distinctive look!) could possibly stumble in this episode. Yet, thinking back across the season, it’s not as though her fashion has been so flawlessly detailed as to be unassailable. Girlfriend has sold a lot of very similar silhouettes with a combination of unsightly metallic knee socks, and she didn’t even put Bae into her comfort zone by convincing her to wear a swimsuit. 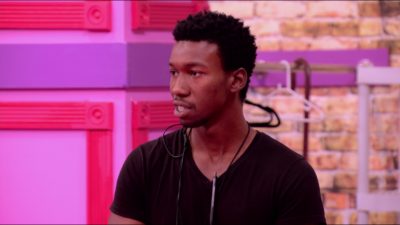 Shea sold all of those previous looks because she has charisma, uniqueness, nerve, and talent in spades – it oozes off of her in every moment of the show. I always say “F” for Fashion is the unofficial unsaid letter of the C.U.N.T. equation, but that’s kind of the point – fashion strength is helpful, but it’s not a requirement, and Shea’s fashion sense is on the better side of “just fine.”

This is Shea’s first time out of finale contention in the weekly rankings since the first episode. My Power Rankings are all about single episode performance plus momentum, and right now the combination of the two leaves Shea feeling a little bit stalled.

However, her overall average ranking is still nearly an entire point higher than the next closest competitor, Trinity. We’ve seen some shock exits of early front-runners in the past – Kennedy Davenport and Ben de la Creme both come to mind – but never for a queen that’s been so consistently stumble-free as Shea.

Her history of challenge wins is almost certainly enough to keep her secure through a final challenge eliminate and the “you’re not in the finale” sashay in the penultimate episode. However, it’s not advisable for her to be coming into the finale off a deflated late run – she needs a powerful showing in one of the next two weeks to really lock up her crown. 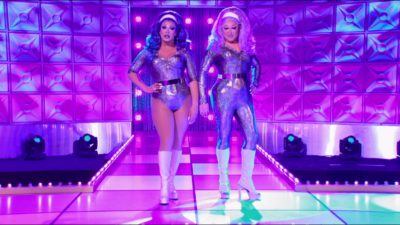 I think Alexis Michelle did a lot better last night than the judges gave her credit for.

Her family resemblance to Rye Anne Stardust was incredibly strong – in drag .Brady from the Sound Department truly looked like a tinier clone of Alexis!

Plus, theor glittery space suits were not cheap in the slightest! It was downright weird to hear that critique on Alexis’s snugly fitted custom jumpsuit after seeing the Party City shenanigans the judges have praised over the years. (a-hem, Bob) 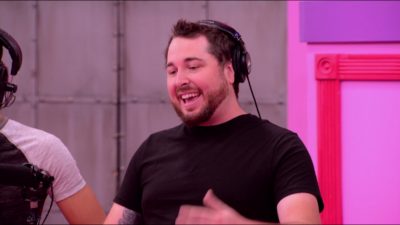 The bottom line is that Alexis just can’t seem to win any love from the judges. They didn’t see her fantastic comedy performance as being all that funny last week, and they didn’t give her much credit for her achievements in last night’s makeover.

Because of that, I don’t think Alexis stands a chance of making it past next week to the final four, despite her being one of my early-season favorites. While some of her best outfits of the season have been looks she’s constructed herself, she has shown a complete lack of awareness when it comes to having an editorial sense on the runway.

The chances of her getting through three outfits without a single crash and burn – especially when she has to make one from scratch – doesn’t bode well for her chances against these four killers. Plus, we know that both Trinity and Peppermint could demolish her in a lip sync -and, from what I’ve seen from Sasha online, she’d have no problem either.

Would Ru send the season favorite Shea home if she lands in the bottom two next week and Alexis can keep up with her in the sync? I doubt it. I think Alexis has shown all of her potential for the moment despite her being an incredibly talented queen.