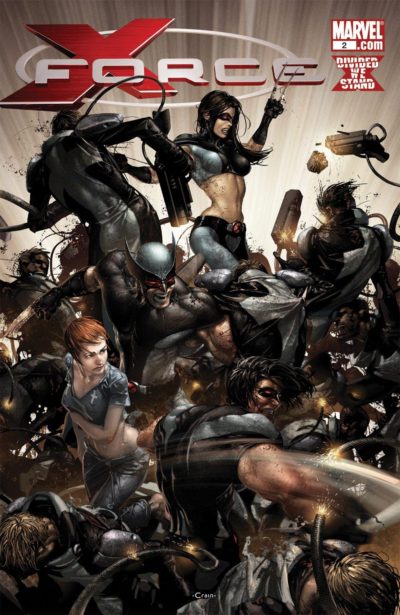 The X-Force by Kyle & Yost Omnibus is the #57 Most-Wanted Marvel Omnibus of 2017 on Tigereyes’s Secret Ballot – and I’ve included the complete X-Force reading order (and casualty count) below!

What Is It? X-Force (2008) maintained the proactive mandate of 1991’s X-Force iteration but added a no-holds-barred bloody approach to the X-Men’s take on counterterrorism.

That’s what you get when Cyclops appoints Wolverine to lead a team of hunter-killers, although he’s not too happy about his line-up. X-23 is there – despite Wolverine trying to steer her to non-violence, as is Warpath – a reluctant killer, both Angel and Rahne – not entirely in control of themselves, and later Domino, Vanisher, and Elixir.

[Thanks to John S. on FB for catching two of the one-shots I omitted!]

X-Force was a part of three events during its run.

The first, Messiah War in #14-16, was a direct crossover with Cable #13-15 with a few pages of introduction in #12. (The original Messiah War collection included Cable #11-12, but they are not relevant to X-Force.) It has appeared in its own oversize hardcover, but is brief enough to be reprinted here stripped of some of its unnecessary supporting material like Cable #11-12 and X-Men: The Times and Life of Lucas Bishop #1-3.

The second, X-Necrosha in #21-25, was not a direct crossover with New Mutants and X-Men Legacy. Those issues, all collected along with X-Force in the X-Necrosha oversize hardcover, are not required to read the X-Force story, which resolves several ongoing plot threads in the title.

The final event, Second Coming #26-28, was a direct crossover across all of the X-Men team books – Uncanny X-Men, X-Men Legacy, and New Mutants, and X-Force. There is no way (and little point) to excerpting just the X-Force material from the crossover – though, it does resolve several remaining plot threads from this title! 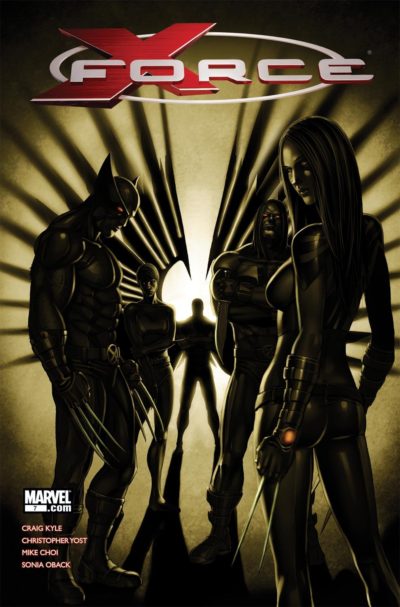 With the exception of Messiah War and Second Coming, X-Force has now been released in four formats! A pair of oversized hardcovers – Volume 1 and Volume 2 – are the quickest way to collect the non-event issues, but Complete Collection Volume 1 and Volume 2 paperbacks add the Necrosha material.

See the Guide to X-Force for every possible iteration. Or, just head to Marvel Unlimited – every issue is available there (although, note you have to type “X Necrosha” to find the Necrosha one-shots in search.

There no other way to say it: X-Force was a shock.

Up to this point it the X-Men’s 40 years of history we had seen plenty of bloody panels – many of them courtesy of Wolverine, Cable, and Deadpool, but also some in books like X-Statix. Yet, even when the X-Men were at their most proactive and forceful, they were rarely a team of killers. That’s something we associated more with their enemies, like the Marauders or Omega Red.

(And of course, there were some major-scale genocidal wipeouts courtesy of Dark Phoenix (billions!) and the mega-sentinel at the beginning of Grant Morrison’s New X-Men (millions!).)

X-Force was the first time that we had an X-Men team devoted to merciless killing. That was only possible because the mutant race found themselves with their backs up against the wall in the wake of House of M and Messiah Complex – with their population decimated and their birthrate flatlined. Cyclops charges Wolverine with proactively eliminating threats to mutant-kind – starting with the fanatical Purifiers.

Wolverine would be game for the exercise on his own, but it’s who Cyclops sends along with him that causes conflict. His first choice is X-23 – a perfect killer, and also a female clone-daughter of Wolverine who he is desperate to save from following his bloody path. 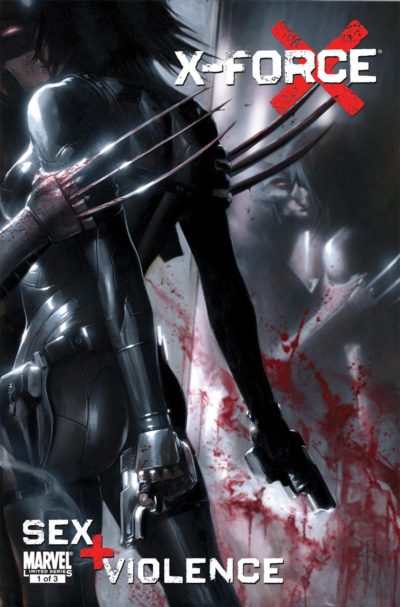 The team is filled out with other reluctant killers – Warpath and Rahne, and unwillingly enlists Angel after he becomes a part of their enemies’ plot. Despite their collective hesitance about each other and about killing, the team quickly gels into a murderous family unit unwilling to leave any member behind.

I’ve read this run several times over, yet paging through it to put together this post I found myself sucked in again and again. Through all this darkness there are some wonderful character moments – particularly for X-23, who had been written almost exclusively by Kyle and Yost to this point, but also for Warpath. And the grim plot is just too clever to behold – for each threat the team crosses off, they only set up a bigger and more-brutal one to follow.

If Fox ever gets an “ends justify the means” X-Force team off the ground in their film franchise, this book is going to hit omnibus so fast your head will spin. There’s just nothing else out there in the X-Men franchise as satisfying brutal and consistently written as this.

Will we see this omnibus in 2018? Probably not. This series has been pretty well saturated in reprints, and it only glancingly includes the cash cows Deadpool and Deadpool. I suspect Marvel would wait until an X-Force film is officially on the horizon.

Would I recommend buying it? Absolutely, yes! This series is infinitely satisfying and merits re-reading – indicators of a worthy omnibus purchase.

Why shouldn’t you buy it? If you don’t like bloody, violent comics, this series isn’t for you. There’s also the generally dark artwork – especially the computer-animated art of Clayton Crain, which can be an acquired taste. It’s worth paging through an issue before you buy. 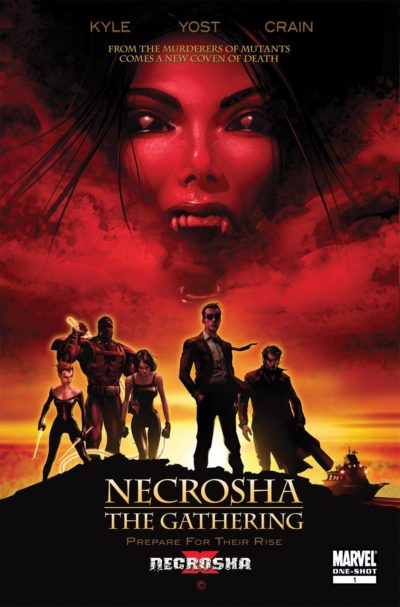 This volume of X-Force has a reputation for being the bloodiest in X-Men history, but how many enemies actually appear to die on-panel? And, of those deaths, how many are especially graphic – headshots, disembowlments, et cetera.