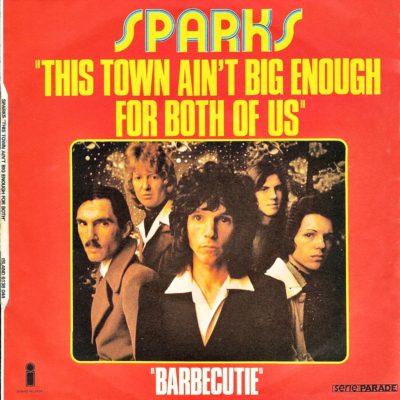 Liz kept playing more of the song’s LP, Kimono My House, but even as I was connecting their sound to other artists like Queen and Kate Bush I couldn’t get “This Town Ain’t Big Enough For Both of Us” out of my head. The first thing I did when we got home was add it to my collection. The time stamp on my file is just after midnight on July 2nd.

This Sparks tune is almost completely unlike anything by Bowie, or even other glam bands like T-Rex. Honestly, Queen really is the most apt comparison. Both bands feature the same rangy vocals, oddball lyrics, and weird and occasionally anachronistic arrangements. I can imagine a universe where Queen became the underground hit and Sparks the well-known breakout.

Zoo time, is she and you time?
The mammals are your favourite type, and you want her tonight
Heartbeat, increasing heartbeat
You hear the thunder of stampeding rhinos, elephants and tacky tigers
This town ain’t big enough for the both of us
And it ain’t me who’s gonna leave

The lyrics tumble past so quickly that it’s hard to make out anything save for the title and the repeated refrain of “heartbeat, increasing heartbeat” in each verse. What do these words even mean? The song’s title sounds like the declaration of a duel, and each verse reads like the singer picturing his rival in a simple, domestic setting that might erupt into a conflict leading to the rival’s sudden death.

The other thing about the song that is really arresting is how it starts so emphatically major key and then switches to minor after the first few chords of each verse. It’s part of what lends it such a hard-to-identify, queasy vibe.

Basically, it’s a murderous fantasy sung with sickening sweetness at breakneck speed, so that you might not even realize the singer was aiming to do you in even if you were his target.

It’s weird and macabre and wonderful, and I cannot turn it off. Since July, I’ve fallen asleep with it on repeat more nights than I can count. Even if it is Glam Rock, it’s nothing like anything else I’ve known before – yet, maybe there are enough familiar elements in its DNA that I’m not really breaking out of my existing mold of musical taste to love it.

I don’t think it matters so much if you break your mold all the time or not, but it would be really sad to lose the ability to fall in a love like I’ve fallen for this one just because you’re over the age of 30.