It’s back with a vengeance – the freshly-updated The Definitive Guide to Ghost Rider!

Sorry, I couldn’t resist the pun.

Want a summary on the multiple major Ghost Riders of the past 45 years, a glimpse at what Ghost Riders have been up to in 2017, and a rundown of just how much of Ghost Rider has made into Collected Editions to date? Keep reading! 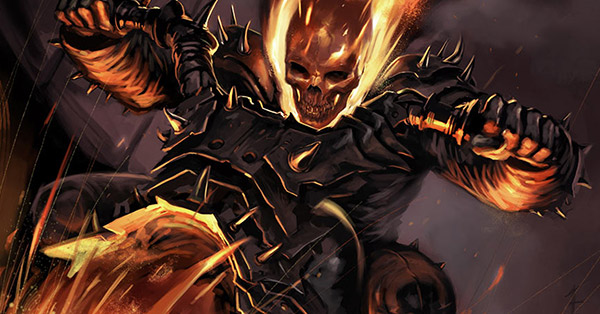 Who is Ghost Rider?

Ghost Rider is a non-exclusive designation rather than a specific title that can be bestowed to different characters like “Sorcerer Supreme” or “Dr. Who.” It indicates a character is being possessed by a spirit of vengeance (not always the same one!) and has a sick ride (not always a motorcycle!). 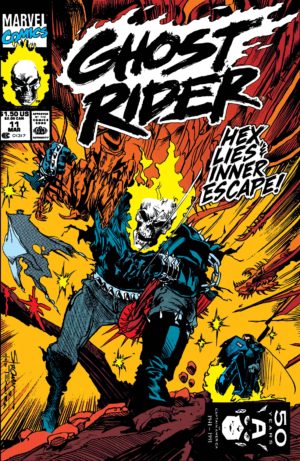 Johnny Blaze makes a deal with the devil to cure his stunt-riding father’s cancer, only for him to die in an accident. Danny Ketch stumbles upon a supernaturally-powered motorcycle to chase off men attacking his sister, only for her to be killed a few issues later. Robbie Reyes is saved from death in a gang shootout by the spirit of a serial killer.

What’s consistent between the various riders, aside from the unexpected consequences of their deals with devils? Ghost Rider isn’t really a hero, and not just because of his thirst for vengeance. The human hosts typically have little control over the spirit once they don the flaming skull. The spirits tend to focus on meting out violent punishment on pretty awful people who really do deserve it. Unfortunately, they also wreak havoc with the personal lives of their host and tend to corrupt them in some way.

Where to Start Reading Ghost Rider

Ghost Rider Classic, Vol. 1 is a decent starting point not only because it introduces Danny Ketch, but because it looks really good while doing it. (I dug a little deeper into that run in this Marvel’s Most-Wanted Omnibus post). Unfortunately, now that it’s out of print it’s way too expensive for its 10-issue length. Luckily, you can still get the issues on Comixology!

While it’s not necessarily the best Ghost Rider run, you can pick up Ghost Rider by Daniel Way: The Complete Collection for a solid, lengthy, modern run that is relatively contained.

However, if you want a recent story and you can appreciate comics with a more cartoonish sense of illustration, I highly recommend All-New Ghost Rider, Vol. 1: Engines of Vengeance. This series focuses on Robbie Reyes, the Ghost Rider we saw in Marvel’s Agents of SHIELD. It’s also just a fresh, youthful, refreshing take on the hero with a surprising amount of heart. 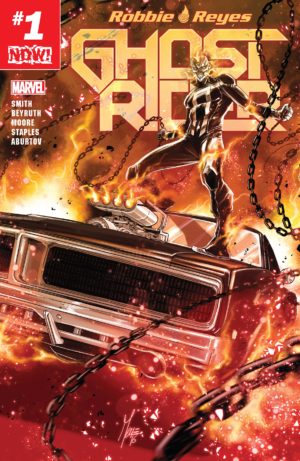 Robbie Reyes – the Ghost Rider from TV’s Agents of SHIELD – began 2017 with his own Ghost Rider series, but it only lasted five issues.

After that, our various Ghost Riders haven’t had much of a profile in 2017 up until last month, when the new Marvel Legacy limited series Spirits of Vengeance brought Johnny Blaze back into play. Also, both Reyes and an ancient mastodon-riding Ghost Rider turned up in Marvel Legacy #1! It looks like the character could be getting a push in 2018!

In terms of collections, Marvel clearly were planning on some Ghost Rider material would be turning up on Agents of SHIELD and in Marvel Legacy, since they released the aforementioned Ghost Rider by Daniel Way: The Complete Collection as well as Spirits of Vengeance: Rise of the Midnight Sons (which now makes way more sense in light of the cast of the Marvel Legacy series, since otherwise it leaves an odd-sized gap after the previous collection of that 1990 series).

Did you catch the female Ghost Rider at all? Her entire 2011-12 Fear Itself era run is collected in Ghost Rider: The Complete Series by Rob Williams.

Ghost Rider is Marvel’s most under-collected hero when it comes to full color collected editions, and it’s all Johnny Blaze’s fault.

There’s both an in-story and real-world explanation for that.

In terms of story, Marvel has little incentive to recollect the 1970s Blaze incarnation of Ghost Rider when he (mostly) wasn’t the star of the better-known 90s series. Meanwhile, in the real world, co-creator Gary Friedrich has some bad blood with Marvel and threatened to sue them for royalties for the character. This turned into a long-running lawsuit from 2007-2013 that helps to explain the lack of reprints and Jonny Blazes’s relative absence in those years.

The result is one of the most massive in-color collection gaps in Marvel’s history, especially now that they’ve gotten more aggressive about Doctor Strange and Luke Cage. That also makes Ghost Rider Marvel’s only multi-era starring hero from the Masterworks era with no Masterworks line of his own. The horror!

Marvel is long overdue for a Ghost Rider Masterworks series covering his Silver Age book, but that will take at least eight volumes to collect – which is eight or more years of Masterworks! Plus it’s just not thought of as very high-quality material, and it still leaves us wanting for collections of the 1990s series. 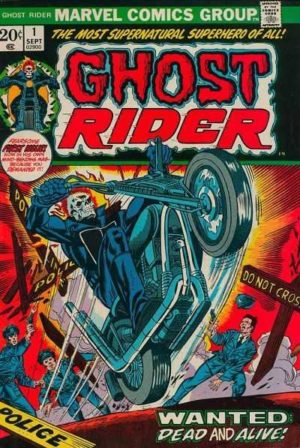 Instead, maybe it’s time to boot up a Ghost Rider Epic Collection. I don’t know that fans care so much about the difference between Blaze and Ketch that they’d need two separate volumes, and the 200ish issues of 70s and 90s Ghost Rider out there to collect is about par for the course for the Epic Line, which could probably knock them out in 10-14 volumes depending on how much sideline material is included. Releasing them at two-per year and alternating between the 90s series and the 70s series, we’d still cover it all faster than we would with Masterworks.

The rub is that the 90s series has a handful of major crossovers that might be best served with their own separate books, like this year’s Spirits of Vengeance, rather than be folded into Epic Collections. It’s definitely a tough nut to crack, and without a huge sales incentive I can understand why Marvel has been avoiding it.

Luckily, once we cross the line into the 2000s, Ghost Rider is nearly 100% collected. Some of the collections are a bit hard to snag now that they’re close to a decade out of print, but I just did it two years ago without breaking the bank.

Want to get started on your own Ghost Rider collecting? Head to the Ghost Rider guide for all the details!