You are here: Home / consume / reviews / Crushing On: Netflix’s Dark

It’s pretty hard to convince me to sit down to watch a non-drag television show these days.

TV is a time suck and its decompressed storytelling can be stultifying. It’s a lot like back in high school when I wouldn’t partake in slow dances at the prom. “They’re just really long, boring hugs,” I would say, “They make perfect bathroom breaks. Come get me for the next fast song.”

(I still mostly feel this way about slow dances.)

That’s why I am relatively surprised to inform you I have binged all ten hour-long episodes of Dark, Netflix’s new German import, in a matter of days. And I loved it, aside from some questionable dubbing.

If you are a fan of Stranger Things and either Lost or Primer, I strongly suspect you will love it, too. 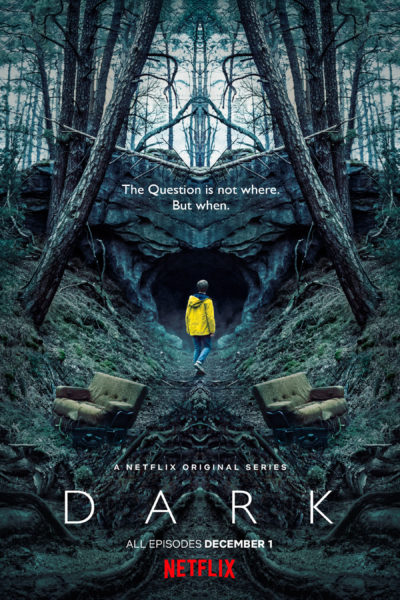 Dark is set in 2019 in Linden, a small German town that has built itself around the economic stability of a local nuclear power plant. The same people have lived in Linden for years, so that families have aged into multi-generational conflicts stretching back to the years just after World War II.

It is June in the opening moments of the show. We hear a disembodied monologue about the cyclical nature of time and then witness a man, Michael Kahnwald, die by suicide. Kahnwald leaves a letter behind, with instructions not to open it until November.

We return to the town in November, just short of the letter’s open-by date. Kahnwald’s son Jonas is trying to reacclimate to the daily grind of school just as teenage classmate has gone missing.

It’s not just his disappearance that unnerves the town. It dredges up memories of another boy that went missing, 33 years prior.

That boy was never found.

At first it seems as though the show will simply be about how Linden refuses to accept its roiling undertow of darkness, both in the present and from the past. Both parents and teens seem to recoil from the emotions surrounding from the elder Kahnwald’s death, and from Jonas and his troubled mother, Hannah.

The town also is hesitant to deal with the teen boy’s disappearance in any realistic way, from widening their search to more closely watching their children. Residents seem uncomfortable when the school principle urges them to take care and action.

At the end of that first episode, we watch as another young boy disappears – seemingly into thin air, much as Will disappears in the first episode of Season 1 of Stranger Things.

It’s an easy comparison to make, and for an episode it seems like the shows will be going to a similar place. However, just as Stranger Things exploded at its halfway point, Dark turns into a totally different kind of story at the end of its second episode. Maybe an entirely different kind of show!

The subsequent hour of television a revelation, but also a sizable speed-bump to your binging. I almost quit watching. 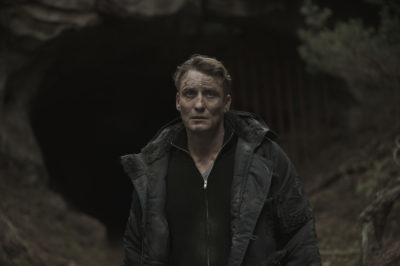 Even when I am riveted by a TV show, I am awful at character names. It takes a show like Battlestar Galactica, full of constantly repeated unique call signs, for me to remember what anyone is called.

Dark starts out with over a dozen named characters, all of whom are vaguely similar-looking Teutonic white people who I could barely tell apart. Then comes the massive third episode twist that felt at points like a quiz on how well I had been paying attention to the first two episodes.

I thought I was done. I briefly turned the show off. Luckily, I found the straightforward recaps on Father Son Holy Gore, which worked well as a character-name cheat sheet and also a plot refresher.

Armed with knowledge (or, at least, a rudimentary amount of name-and-face recognition), I pressed forward. I’m so glad that I did. Despite some truly dreadful English dubbing and an overbearing, ominous soundtrack that sounds like something that Forgetting Sarah Marshall‘s Peter Bretter might have cooked up during a bender, the intricate story and strong cast of Dark makes it 10 episodes of TV that reward your attention.

That said… you have to be willing to leave it there. Time might be cyclical, but Dark ends in a very different place than it began – one that means its multi-generational web of lust, deceit, and vengeance likely won’t dominate a second season as it did the first. Add to that the Lost problem – despite leaving at least 27 major questions unanswered, showrunners Writer Jantje Friese and director Baran bo Odar don’t have a darn clue of where they’re headed in Season 2 [heavy spoilers in both those links!].

I’m fine with that. I think Dark works perfectly well as a twisted low-fantasy allegory about how the radiation of a nuclear plant poisons the relationships in a town, forcing its residents to live out the same little acts of violence again and again. I don’t need a wider world with a higher stakes plot.

As much as the final frames are meant to be an unpredictable shock, they line up surprisingly well with restarting first episode, so that you can watch this on an endless loop, digging deeper in to the relationships that drive the mysteries on each pass. (Thus, my comparison to all-time-fav Primer.)