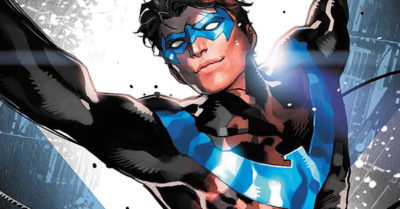 I couldn’t have been more wrong. Grayson was new to wearing the cowl, but not to being a hero. He wasn’t as foolproof as Bruce as Batman, but he was more emotionally complex and pragmatic.

After Bruce retook the mantle, I was eager to read Dick Grayson as himself in DC’s New 52. It was there I fell in love with him as his own hero. He was like a cross between Batman and Daredevil – detective and acrobatic, experienced but imperfect, and also a hopeless flirt. All of those traits were emphasized when his series transformed into the brilliant Grayson, which made him a triple-crossing super-spy in the mold of TV’s Alias.

Nightwing’s guide should have been an easy one to create – he has only one pre-Flashpoint ongoing series, plus three tidily-collected series in New 52 and Rebirth.

Of course, I don’t know how do make an easy comic book guide.

The lack-of-ease began with realizing that I ought to make the Teen Titans and Outsiders guides before completing this one, since Nightwing’s guide would reference them both heavily.

Then, I hunted down every Dick Grayson appearance as Nightwing. There were way too many for me to summarize each one, but I did break them into chunks of Bat-Title Appearances, Team Appearances, and general Guest Appearances and then intersperse them through the years of his solo title. Plus, I listed all of Grayson’s appearances as Batman and where to find them in other Crushing Comics guides.

The result? A complete, issue-by-issue guide to Nightwing’s complete history in DC comics!

Want access to this guide today? It’s available in exchange for covering $1.99 a month of CK’s hosting expenses.

Previous Post: « New For Patrons: The Definitive Guide to DC’s The Outsiders
Next Post: on fathers and borders »