Today’s new guide for Patrons of Crushing Krisis is my first guide for a creator-owned comic – created as a celebration of breaking the 100-Patrons mark! 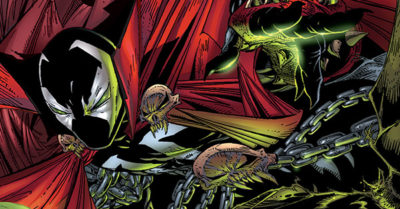 With Spawn now crowned as the ruling Guiness World Record holder as the longest-running creator-owned superhero of all-time (and with him coming in at 3rd place out of 10 options in the April poll), he seemed like the natural place to begin my guide coverage of creator-owned comics.

As with many of my guides, researching Spawn’s publishing history held many surprises for me.

I had no idea that his first 100 issues were so comprehensively covered in every imaginable format – slipcase, oversize hardcover, deluxe paperbacks, and regular-size trades. He has one of the best and most-logical reprint coverage across multiple formats of any superhero, ever, once you get past how similarly-named all of the reprint lines are. 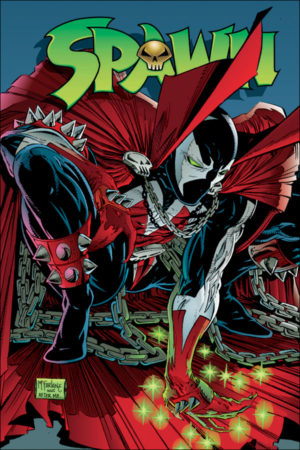 (I wonder if there is a Guinness World Record for that.)

The next surprise was how coherently told the Story of Spawn has been. I was under the impression that Spawn’s narrative has splintered into many other titles, but that’s not really the case.

Though there have been a handful of supporting ongoing series expanding Spawn’s universe, you can absolutely read Spawn #1 through Spawn #300 while only breaking for one non-sequential issue – 2015’s Spawn: Resurrection.

Finally, I had no idea of the creative consistency behind Spawn. Todd McFarlane an Greg Capullo pencil over 90% of Spawn’s first decade, and there are only 35 issues of Spawn which aren’t at least co-plotted by McFarlane.

Even after the McFarlane/Capullo art era, Spawn has had many periods of consistent art, from several years by Angel Medina to Szymon Kudranski’s star-making turn before his jump to Big Two comics like Punisher and Action Comics.

This guide doesn’t quite cover the entire world of Spawn – there are some supporting titles without Spawn’s name on them, plus a certain elusive supporting character to address. Look for more on that in the future.

Previous Post: « Haul Around The World: Why no EPICs for New Warriors? Plus: Daredevil, Gambit, & more!
Next Post: New For Patrons: Guide to Captain Britain »