I’m so happy that everyone now recognizes the staggering genius of Sia, and every happier to hear her back to her kooky ways beyond just wearing massive wigs on her new holiday album Everyday Is Christmas.

Yes, this is me blogging positively about a holiday album. Me, the O.G. Grinch, who doesn’t even accept presents during the month of December and has a daughter who thinks all the decorations are for Solstice. So you know I really love this LP.

I also really love Sia. I loved her before she was popular (again), and even slightly after she was cool (though I didn’t realize it at the time).

For many listeners, popular Sia starts with the bomb blast of the “Chandelier” music video in May of 2014, before which they were vaguely aware of her as a popular songwriter or as the singer of “Titanium” in 2011 with David Guetta. In either case, at that point she was already several albums deep into a string of unbelievably good releases starting from 2004’s Colour The Small One.

That’s where I picked her up, though I didn’t grab it until 2006 during a little binge on European-sounding trip hop albums (that also included Instinct by Mandalay). What I didn’t realize at the time was that her “Breathe Me” on Colour was the same song that my impeccable curator surrogate aunt Maggie (and the entire internet, in retrospect) had been raving about since it was prominently featured on the finale of Six Feet Under in the summer of 2005.

(I had thought she was talking about Anna Nalick’s “Breathe (2AM),” so I promptly picked up her Wreck of the Day and wasn’t disappointed in the slightest, so I never realized my mistake.)

I had no idea Sia was so cool, but I was in love with the unpredictable vibe of the record, which went from the icy piano of “Breathe Me” to something reminiscent of Dusty Springfield on the choruses “Where I Belong.” It turned out unpredictable was Sia’s strong point, as I learned from her neon-tinged Some People Have Real Problems with the bouncy “The Girl You Lost To Cocaine” and cartoonish, repetitive “Buttons.” She brought the same bounce and oddness to 2010’s We Are Born. 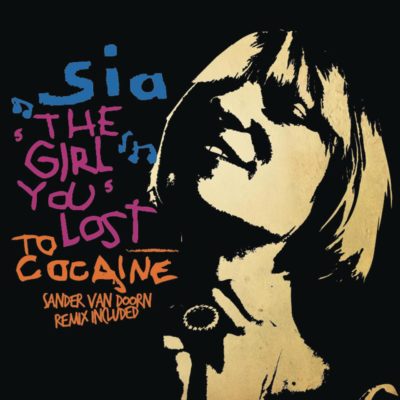 (That perception that was only enhanced by seeing her in concert, where all of her amps and equipment were completely covered in bright crochet, and she mimed along to her lyrics like some sort of demented marionette.)

Then, “Titanium” aside (which was released without her consent), Sia disappeared. Intentionally! She was done being a pop singer touring clubs and moving on to writing songs for other artists, which certainly came with a much bigger payday. Suddenly she was popping up on The Voice credited as a songwriter to Christina Aguilera rather than an artist in her own right.

I was so surprised and happy when 1,000 Forms of Fear appeared out of seemingly nowhere in 2014 and got massively huge on the back of “Chandelier” and “Elastic Heart” (and a lot of interpretive dance) it didn’t quite sound like the crazy, unpredictable Sia I knew.

That made sense, since Fear was written to finish out her publishing deal and the subsequent This Is Acting contained songs Sia had ostensibly written with others in mind. These were songs written as hits rather than a personal project. Still, their thumpy, radio-ready sound really started to wear on me over the past few years of listening. It wasn’t the crocheted cartoon character I loved.

That is why I am quite suddenly obsessed with Everyday Is Christmas. It is Sia at peak weirdness, totally unpredictable, singing about damage and codependency over a melange of bright new plastic sounds in what feels like an immediate sequel to We Are Born.

It also happens to be about a vaguely sinister Santa and and how “Puppies Are Forever.” Deal with it. END_OF_DOCUMENT_TOKEN_TO_BE_REPLACED