You are here: Home / Personal / topics / day in the life / do start believin’

A week ago I had just finished commuting home for the first time to my new house. Presently I am the merch guy for Filmstar as they split a bill with The Shondes at Tritone.

That’s the life, at the moment.

That, a seemingly unlimited amount of cardboard boxes in various states of unpack, and a steely, unflinching resolve to spend money on things like towel hooks and toilet seats. Whatever it takes.

We moved with no issue whatsoever, aside from only sleeping two hours in a 36 hour span. After all of the wacky settlement hijinks it was a bit of a letdown, where “letdown” means “totally awesome gift from serendipity.”

Things have generally been serendipitous lately, in a broad Alanis-Ironic reading of the term. I like to think it’s universe-funded payback for all the not-being-nasty I’ve done in the last year.

It’s hard. I’m nasty by nature. Or, at least, by nurture. 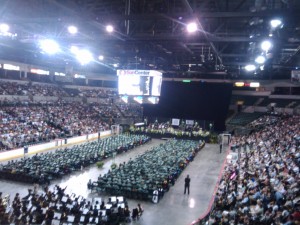 My high school graduation was 1/10 this big.

On Tuesday we walked into Trenton Arena, late for E’s brother’s graduation, to discover his face displayed on a jumbotron singing “Don’t Stop Believin’.” Apparently he was the only tenor confident enough to bring an appropriate amount of NJ rock to that Journey classic (by way of Glee), and so wound up singing Steve Perry lead at his own high school graduation to a half-full arena’s worth of crowd.

And now I am in an increasingly packed rock club, selling merchandise and recording video for my wife’s band while she rocks out in a rather short skirt which I heartily endorse. Later we will go back to our house, and sleep on a mattress on the floor. Tomorrow I will finish setting up my new recording studio and start playing music again.

This is the life.