Brothers is an album of elemental music, heavy and hot, guitars ablaze and drums a seismic shake.

Two-man band The Black Keys have crossed the gulf of bluesy familiarity heard on their past records, transforming into something more fascinating and immediate. Their guitar and drums setup serves as inspiration rather than restriction as the band reinvents possibilities with every song, employing a series of incendiary melodies and riffs that sound as though they could send your speakers up in smoke. 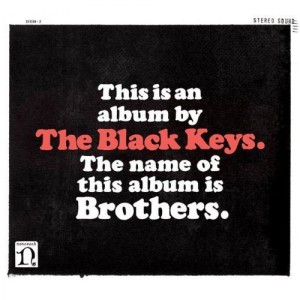 Credit where due, part of the intense, elemental sound is surely from producer Danger Mouse, who leaves aside electronic trickery to carefully craft and texture every noise on this album. With a transfixing array of guitar tones and a solid slab of percussion beneath them, songs never sound empty even when they leave plenty of space to breathe – some air around the apocalypse of dust and smoke.

For fans of the hookier, firey moments on the album, there is only a slight slump, as it descends into more standard squalling blues on “The Go Getter” and sparse “I’m Not the One.” The scarcity of these more standard moments only emphasizes the versatile power of Brothers as a whole. Directly following them is the soulful classic “Unknown Brother” and a crackling cover of Gamble & Huff’s “Never Give You Up.”

Despite the obvious heft of The Black Keys, Brothers still manages to surprise by its sheer heft as an entire piece of work. Fifteen two-man blues tunes from any other band would be too much for one LP, but in the hands of this band each song’s title is an endlessly repeatable refrain – a brand that seers itself deep into your brain until reading the track list evokes instant bite-size samples drifting to your ears from the inside out.