Tori Amos has a new album out today, Night of Hunters, released just a few months shy of the twentieth anniversary of her seminal solo debut, Little Earthquakes.

I spent this morning tweeting my reaction to the new album, a classically set song cycle heavy on mythological themes. The music is bold and haunting, but the lyrics are largely obscure and off-putting.

Little Earthquakes was practically its opposite, all about clever wordplay even when the piano was reduced to music box simplicity, quoting the same lines again and again, or utter silence, on “Me and a Gun.”

(Watch me cover “Precious Things” on YouTube. For more info on my 30 for 30 Project, visit my intro post or view the 30for30 tag for all of the related posts.)

I remember Tori’s debut tickling at the fringes of my consciousness that year, maybe on MTV. I was in sixth grade at the time, my final year at my private Christian school. 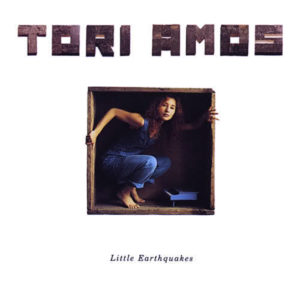 When I later discovered the album in 1998 it all sounded so obvious and familiar to me, but no one in my life was listening to it in 1992. Maybe I was just feeling her echo across media, reactions to her and the door she was helping to open for female singer songwriters. Maybe I saw her on Jay Leno, which I watched nightly. Who knows.

“Precious Things” was a vestigial promo single from the album, but it has grown to become one of Tori’s most essential songs, and a staple of her live shows.

It has also grown become especially resonant for me. Running faster on the playground from the boys who want to torment you. Those perfect Christian Boys, and how I could never wield the bible quite as well as them. And, later, being a useless, ugly thing who at least can keep my keeper entertained.

Like Madonna, I intended Tori to be out of bounds for this project. I had another fine 1992 song prepped and rehearsed for a week, but when it came time to sing it in the studio it was missing something that I wasn’t going to be able to locate in the span of an hour.

I got a little bit desperate, scanning my iTunes collection for other 1992 songs. I kept scrolling by Tori until, finally, I paused. Could I? Surely not. Surely I would be too much of a perfectionist freak to unfurl “Crucify” or “Silent All These Years” in a single hour with no rehearsal or arrangement.

Yet, I’ve been rehearsing and arranging Tori’s songs for over a decade. They were how I learned to read sheet music, the first music I entered midi sequencing program, and the first songs I truly arranged for guitar.

And, I did always have a pretty wild guitar cover of “Precious Things” in mind, if I could just find the right key.

(The other 1992 song I abandoned at the last moment was Gin Blossom’s “Hey Jealousy.” It’s a perfect fit for me and my voice, but the chords are so simple and I couldn’t find a dressier voicing I was happy with. The only other song truly in contention was Annie Lenox’s “Walking On Broken Glass,” but I couldn’t find an arrangement on guitar that captured enough of the original.)