Is there really anything to say here? The cover of this book features Frankenstein wielding a gattling gun, backed up by his four-armed bride and a Japanese school girl wielding a revolver.

My hopes, they were not high. 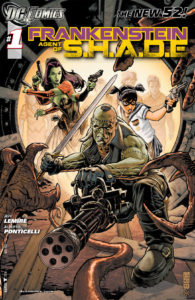 In a Line: “And so far, I must say I am worried. This place is an advertisement for mad science bound to go wrong.”

Frankenstein, Agent of S.H.A.D.E. #1 is a great comic book, and I’m shocked it’s out as an ongoing under the banner of DC. It goes to show that The New 52 isn’t completely for show – some different concepts are really getting a trial run as marquee titles, and it’s up to readers to show their support.

I was cold to this book for about half the issue. A miniature base in a a bubble that requires agents to shrink down to size to enter. Disposable organic robots that dissolve after a day of use. A master who randomly swaps bodies every decade, and is currently inhabiting an Asian school girl. A special forces squadron of volunteer monsters. 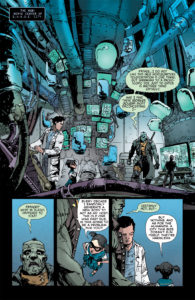 It all sounds rather tiresome. Yet, somewhere in the middle of the issue it turned from an obligatory read to a page-turner.

A lot of that has to do with the constant slinging of madcap plot points from author Jeff Lemire. (Yes, that’s the same Lemire that illustrated Animal Man. He is amazing.) If oddball details had been hammered into the ground I would have found them awkward. Instead, each was treated as routine – just another minor facet of an outlandish and compelling world constructed around our titular horror. Not explaining the ridiculous reality of the book gives the reader tacit permission to just not care where Frankenstein came from or why he’s a hero. The book became immediately more enjoyable.

I’d be lying if I said it was solely my suspension of disbelief that kept me hooked until I was really hooked. Actually, that can be chalked up to art from Alberto Ponticelli. I love the deliberate messiness of his pages, things left sketchy and roughly hewn. Yet, he can also scale back to show a clean panel of faces. At points he is definitely reminiscent of Chris Bachalo’s DC work. 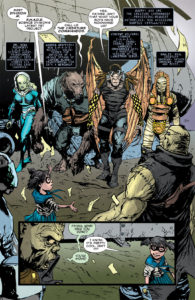 The plot? Some sort of hell mouth has opened in a remote town, expelling hordes of carnivorous monsters. The Bride of Frankenstein went missing trying to contain it. Now it’s up the Frankenstein and his horrific team to monster mash their way through the town to plug the hole and locate Bride. If it sounds silly… well… it sort of is, but the book never descends into humor despite a few consistently wisecracking characters and an even-funnier straight man werewolf.

Frankenstein’s DC history is short and relatively recent, and doesn’t seem to have much bearing on the proceedings here. Lemire uses SHADE’s computer to narrate through a few otherwise incomprehensible situations. For a while we’re left to think it’s talking to Frankenstein, but by the end of the book it is addressing us directly. Again, advantage Lemire, who am I now mildly obsessed with.

This isn’t a perfect issue, but it is perfectly entertaining and absolutely worth a purchase. Pick this up while you still can, and while we can still send a signal to DC that we want more of Lemire and Ponticelli’s edgy horror on the slate for many months to come!