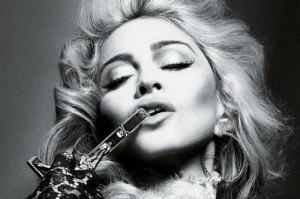 Welcome to Day 2 of my personal celebration of Madonna’s twelfth studio album, MDNA! I’ve been listening to it non-stop since yesterday morning, and some early favorites are beginning to emerge … but I’ll get to that later.

For all of her indelible hit singles, it’s easy to forget that Madonna knows how to deliver a stellar deep cut. Forget the hits. Forget the late-released low-charting singles. These are twelve Madonna songs you could only know if you play her albums front to back, and they’re all good.

12. Sooner or Later from I’m Breathless

Okay, this one is cheating a little bit – because it won a freaking Oscar. Now, that’s not an Oscar for Madonna – the Best Original Song award is for the songwriter, not the performer. Thus, Stephen Sondheim took home that naked golden idol in 1991. Yet, Madonna wound up with the song – a truly award-worthy torch song that she sings the hell out of. She delivers such a credible cabaret imitation that it stops being an imitation and starts being reality. (However, when it comes to Oscar, the beautiful “What Can You Loose” duet with Mandy Patinkin might have got my vote instead.)

So, you like “La Isla Bonita,” huh? Did you know Madonna has another pseudo-Latin tune played on even more organic instruments, with a super-raw, almost screamed vocal performance? Sounds like something from American Life, you say? Nay – it’s the closer from “Like a Prayer.” It’s not one of her best songs ever, but it’s a wonderful glimpse at Madonna’s version of writing a follow-up single, which is disappearing entirely into the genre she previously imitated.

10. Nobody Knows Me from American Life

Madonna disappears inside of the machine on this American Life album cut that buries her deep beneath throbbing synthesizers and enough auto-tune to make Cher’s “Believe” blush. It comes off like an over-processed remix of itself, which cleverly distracts you from the brutal lyrics, like “But why should I care what the world thinks of me? Won’t let a stranger give me a social disease.” Madonna dressed this up with more beats and stunner choreography on the Reinvention Tour, but I still prefer the sucker punch of the stark album version.

The reason Hard Candy is my least favorite Madonna album by a thousand leagues is because it’s such a lame duck attempt to make relevant R&B when Madonna has always done just that with very little effort. The one clear success to me is this holdover from her aborted musical written with brother-in-law Joe Henry. It was previously a show-stopping ballad, but M and her producers reinvented it as an awesome R&B radio-ready kiss-off that Rihanna could have taken to platinum hit status.

One of Madonna’s best rock songs, this Ray of Light cut is what she chose to feature her first guitar-shredding solo on the Drowned World tour. On the record it’s more subdued, the primal two-chord guitar riff interpolated so far into a thrumming, hypnotic drum loop that it’s impossible to untangle the two. The mess of inane-yet-meaningful lyrics that may have been cribbed from a magnetic poetry set just makes it more punk ;)

One acoustic guitar sample. One chunky, vintage-sounding synth lead line. Two or three Madonnas, all singing plaintively with absolutely zero processing to obscure her voice. It’s one of the most arresting songs in her entire repertoire. If this is what Madonna demos sound like, I look forward to a whole thousand dollar boxed set of them to commemorate her 80th birthday.

Maybe you’ve heard this – Madonna sings some of it onscreen in Dick Tracy. But have you really listened? This is Madonna nailing infectious, intricate Sondheim lyrical pitter-patter with the help of a beautifully restrained big band arrangement and crisp, live production from Bill Botrell (a Michael Jackson producer who later won a Grammy for Sheryl Crow’s debut). This will always be one of my favorite show-tunes, and it’s not even from a real Broadway show!

5. I Know It from Madonna

First of all, ever since the 80s the horn intro to this song has always reminded me of the sea stage of the first Super Mario game on GameBoy. Wow, I’ve been waiting forever to get that off my chest! In other news, only three songs from Madonna didn’t chart, and “Physical Attraction” later got a popular remix on You Can Dance. That makes “I Know It” one of the two deepest of all deep cuts in Madonna’s catalog, and it’s a good one. The song combines cheerful, bouncy, major key verses, a commanding chorus, and a weirdly chromatic bridge. Plus, it features direct Madonna-on-Madonna harmony – always a pleasure. PS: I’ve covered this song.

4. I’m So Stupid from American Life

Dear lord, how did this not wind up as a single off of the unfairly-maligned American Life? I’ll never understand. The catchy, self-deprecating tune is one of the few on the album that could get asses shaking without a remix. I love the offensive, buzzsaw synths and guitars, and it’s got some great vocal passages. Check out a Chewbacca-esque back-of-throat howl on “adding up to nothing.”

Let’s face it – I am a sucker for when Madonna goes organic – and I’m not talking about her diet. This simple construction of strummed guitar and a slowly spun R&B beat is the queen of Madonna’s post-2000 “determination ballads,” where she gets a little down on herself for a second but then vows to never give up. It toes the line between folk ballad and R&B slow jam, later adding some wheezing synth lines to the mix to confuse things. Also, it is the first (and, thus far, only) Madonna song ever covered by Arcati Crisis – right here on this blog! And, Gina was the one to suggest it. Fun fact: Madonna performed this live on the European leg of her Drowned World tour, but frequently substituted minor hit “You’ll See” in America.

Another super-deep cut – one of only two songs on Like a Virgin not to see release as a single. I’ve always loved this song, ever since I used to dance around the house to it when it was the B-side of the “Dress You Up” vinyl. It’s one of Madonna’s rare solo writing credits, and one of her most organic productions of all time. The arrangement is pretty much just live drums, a simple keyboard part, and a hot saxophone solo. Take that, Lady Gaga – Madge beat you to that second album sonic shake-up by almost thirty years. But, more than that, it’s one of the songs that shows the clear through-line from Madonna to the pureness of 60s girl groups and doo wop – without being a retro piece like “True Blue” or a modern reimagining like “Gimme Me All Your Luvin’.”

Wouldn’t it be cool if we could lock Madonna and Prince in a room, circa 1988, and listen to the results? Well, guess what? THAT ACTUALLY HAPPENED. I cannot even quantify how obsessed I was with this song as a nine-year-old. It was a pop music crossover, like Wonder Woman fighting alongside… well, the Joker, so let’s put that metaphor down for a second. This song is an ultra-weird collage of sounds and vocals and murmured phrases in French with no real chords or structure, and Madonna would pilfer little bits of it again and again (including lyrics for the hook for “Hung Up.”). It must be heard to be believed.

That’s my list of favorite unknown Madonna songs! How many of them have you heard before? And, what’s your favorite Madonna deep cut that doesn’t appear on the list?