You are here: Home / consume / comic books / From The Beginning: WildStorm Universe – Wetworks #4-7 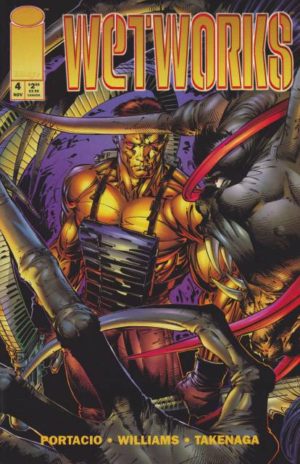 It feels like the team takes a backseat in these issues, although they do finally get some character development off the battle field. While I’ve finally got all of their names straight (Dane, Grail, Claymore, Jester, Pilgrim, and Dozer back at base), it’s hard to care about any of them aside from the team’s advance scout, Pilgrim. Coincidentally (or not?), Pilgrim gets two of the biggest scenes in the run that generate more questions than answers.

There’s also a lot of focus on the mystery of Mother One – who, let’s not forget, murdered two of the team in #3 just to gather telemetry. That was meant to be a surprise, but here she’s dropped all pretenses of being anything other eeky cyborg lady who freely reads everyone’s minds and is only 20% human to begin with. The team quickly grows as suspicious of her as we are as readers.

If it was hard to trust Mother One as a reader, it’s impossible to root for either side of the vampire conflict. Drakken is definitely written as more “evil,” but we’re talking about vampires here – they’re all evil. By contrast, his cousin the queen seems bored by her entire existence, barely deigning to make a semi-century appearance in front of her subjects and bristling at her inability to join in the fray of battle. Would it be so bad to depose her?

We learn that Wetworks is less an interloper and more a third wheel in the internecine vampire wars, thanks to their creepy benefactor Waering being a werewolf himself. Or, at least, the letters columns told me that – I had to go back to #5 and squint pretty hard to figure he was the human identity of the werewolf we meet.

Whilce Portacio isn’t delivering the same A-Game we saw in the first few issues. As with all of the Image founders within their first years, not being reigned in by editorial brings out both his best and his worst tendencies. The other founders had moved past that phase at this point (and, in Jim Lee’s case, off of his book) while Portacio is still figuring things out.

His panels are overly busy and too dark. It results in a lot of muddled, making characters hard to recognize (on top of them all being identical and gold). Plus, some key actions are indecipherable, as with a pivotal scene with Claymore and Jester that I can’t make heads or tails of. He seems to really cut loose when the WildCATs are briefly on panel (or maybe that’s Joe Chiodo enjoying their brighter palette) in a way that we don’t see again in this run. Francis Takenaga scripts Portacio’s plot with way too many words and far too little clarity; these issues are his first comic credits.

This run gives us a lot of information about  the timing of other titles. Lynch is out at IO and Santini is reporting directly to Craven in #4, which places this after Gen13. Then, WildCATs appear in #4-5 sometime around WildCATs #14 (it’s prior to Voodoo’s injury in WildCATs #15) except they’re missing Warblade – so maybe that is after #19? Anyhow, it gives Grifter and Dane their first meeting. That throws a bit of a wrench into Deathblow #9-12 (where Lynch is with IO and Grifter and Dane work together), except maybe none of that actually happened, so we’re not going to get too worried about it.

Want the full details? Keep reading for a deeper breakdown of the plot. Here’s the schedule for the rest of this month’s WildStorm re-read. tomorrow we’ll work on three WildCATs tie-ins: Warblade: Endangered Species (1995) #1-4, Grifter: One Shot (1995), and a WildStorm Rarities Maul story. Then, it’s back to Stormwatch (1993) #17-21 & Special 02!!!

Need the issues? You’ll need to purchase single issues – try eBay (#4-7) or Amazon (#4, 5, 6, 7). Since further Wetworks series hit these same issue numbers, be careful to pick up issues from the 1994 series – an easy way to tell the difference is that Mike Carey is the writer on the later relaunch. 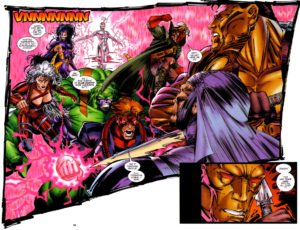 Wetworks #4 opens with Dozer, who keeps expanding like Veruca Salt in Charlie and the Chocolate Factory until he’s a giant golden blimp. Grail, who is all one with his bright blue energy form, is trying to teach him some zen. Dane wants to take down Craven, but Waering and Mother have other plans – specifically, assassinating Drakken before he can usurp the queen’s vampire crown to unite the Night Tribes and wage war on humanity.

Craven catches wind that Drakken will be meeting with Daemonites and manipulates the WildCATs into intervening. Draken (flanked by tamed werewolves) thinks Helspont is still in control of the Cabal, so Defile comes as a bit of a surprise to him. Wetworks gets the drop on the whole assemblage and nearly murders the lot of them, but are interrupted by WildCATs (sans Warblade and Marlowe) blundering into the middle of the fight. 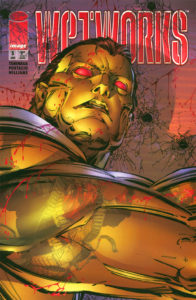 Wetworks #5 opens with the team going toe-to-toe with WildCATs, who are relatively competent here while vacationing from their own title. Mother One manages to hack Spartan, which causes Void to call a full retreat. WetWorks caused lots of destruction, but failed to take down Dakken – Waering will not be pleased, so the team decides to opt for some downtime.

Grail visits a former lover who assumed him dead, but in his blue energy form she thinks he’s an angel. Claymore and Jester head out for drinks, but Jester doesn’t know when to stop. When Clay brings him coffee while he’s hungover he drops it and it phases right through Jester’s arm (I think? The art on this page is really sloppy.) Waering learns of the team’s failure while in the midst of a bloody werewolf fight where he’s one of the werewolves! Dakken, attended by a team of nearly-nude hot men, prepares for his coronation as vampire king (not literally – he’s going to have to kill a lot of other vampires first). 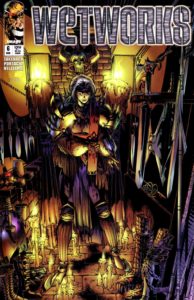 Wetworks #6 is almost all vampire plot. We see the queen make her once-every-50-years appearance to a crowd of vampire peasants who think she might be getting a bit long-in-the-tooth for the job. Dakken’s army interrupts the ceremony with violence, leaving the queen’s ally Kaithan to help fend off the attackers. It turns out Dakken isn’t even there in person – he sent a body double.

Waering berates Dane for not taking out Dakken in the opening arc, saying it might result in all of humanity dying if someone uses nuclear weapons against the vampires, which… doesn’t make a ton of sense? Dane takes a routine ride out to the desert to do some yelling – apparently a frequent occurrence.

Pilgrim stalks Mother One from the shadows on Dane’s command, despite being on a first name basis with the cyborg woman. Pilgrim thinks she’s been spotted and steps out into clear view to confront her quarry only to discover Mother One is in a sort of trance, speaking to someone other than Pilgrim who isn’t visible – and neither is Pilgrim! 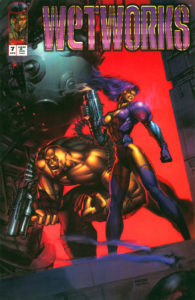 Wetworks #7 finds Wetworks in the far north of Canada stalking a vampire enclave. Pilgrim infiltrates the caves alone (accompanied by a spying orb piloted by Dozer from back at base). She is confronted by her own evil doppelgänger (with evil bangs!) who professes to be from a parallel dimension.

Our Pilgrim gets the drop on her using the new invisibility powers we saw last issue and pulls the wiring in her suit, but the suit’s failsafe is to create a cocoon around Bad-Bangs-Pilgrim and zap her back to her reality, and our Pilgrim gets caught within its grasp.

Oh, and some vampire stuff. Drakken more or less asks for a no-confidence vote in the Queen and her rock star brother so he can assume the throne. Yawn. A backup story shows a mega monster called The Lone One being awakened high in the alps.