I don’t just mean the first day of proper “you might learn something there” school. I mean it’s her first day of public or private care outside of our own home. Ever. 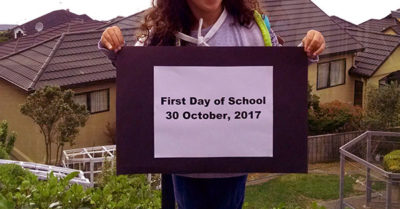 It’s quite the belated start to school for her, considering she’ll be heading into Year 1 (the NZ equivalent of Kindergarten) just nine months from now. Many kids have logged four years of being cared for out of the home by this point in their lives.

As with many things here in New Zealand, our perception of pre-Year-1 school from abroad was a little different than the reality here on the ground.

While kiwi kids have a guaranteed Year 1 start date on their fifth birthdays, all care prior to that is optional despite 20hrs of each week being state-sponsored for 3-4yr-olds.

Given the state sponsorship, we were relatively sure getting into a daycare would be relatively easy, and there seemed to be tons of them. That’s compared to Philadelphia, where for many quality pre-schools you need to have your child on a waiting list before they are even born!

The complication arose from just how much school we were interested in Some care centers only offered 20hrs a week of care. Basically, they were set up to capitalize on the state-sponsored benefit, but that was it. That would be great for right this moment, but if I wound up in full-time job prior to EV6’s Year 1 started date we’d be in a pickle. By contrast, outside of the city the full-time child care centers were much smaller than their US equivalents and they all had wait lists – just not quite as long as the ones in Philly.

We sent out notes to the closest full-day schools on my birthday back in September. Two replied in short order – both to offer us a spot on wait lists stacked up into 2018. Eek.

Luckily, for once my resident OCD Godzilla really paid off for us.

You see, I way overshared in my notes to the schools, mentioning we were newly here from abroad, EV6’s nannied history, and that my flexible schedule meant we could take even the oddest combination of hours at first.

Did they have a block of 1-3pm on Mondays and Thursdays that needs filling right now? Whatabout just the lunch hour every day while some kids headed home to eat? Whatever it was, we’d take it … as long as we could keep hoovering up more little opportunities until we could manage to cobble together a full week.

That’s exactly what happened. Two weeks ago, a woman called from the closest school, asking if I was still interested in the waitlist. I didn’t think anything of it, but I rang her back to discover they had a Monday opening and no one who was interested in just one day a week. That was the sort of thing I was interested in based on my note, yes?

Obsessive oversharing for the win!

We were in the school for a visit within an hour of the phone call. It didn’t hurt that EV6 is somewhat under the impression that we moved to New Zealand specifically for the purpose of her attending school, as if all families pick up and move around the globe with their 4-year-olds in order to find the right Pre-K. I’ve never seen the kid get her clothes on so fast unless it involved carnival rides.

Me being me, at first I was utterly alarmed by the informal nature of school (and this is coming from someone who attend Montessori kindergarten). Kids of all ages mixed across activities and could freely come and go from an outdoor playground. There was no mandated reading or letter-tracing time. Plus, the kids had free access to a mud pit and were encouraged to get dirty every day.

It took me the longest to recover from my utter alarm about the dirtiness, but we’re talking about someone who would be happiest hermetically sealed inside a clean room with a book and a notepad when he was a kid.

As for the academic stuff… it’s Pre-K. One of the many reasons we were okay with leaving the states was the utterly messed up system of school that’s over-focused on achievement but with hardly any attention paid to individual needs.

It’s the complete opposite here. Plus, EV6 is already way ahead on reading (she read me all of The King’s Stilts the other day) and vocabulary, and that all came from just hanging out with E and I. It’s not going to go away in nine months of schooling. It was way more important to get her some high-quality social interaction and personal attention from anyone other than her two parents.

The most stressful part of yesterday – other than spending the entire day worried that my child was touching mud at that very moment? Figuring out how much food to pack for lunch.

EV6’s favorite part of the day? Unfettered access to monkeybars.

Plus, between our two trial runs and yesterday we’ve already picked up more hours from kids who will be on summer holidays with their parents in the next month! No risk of that for us – I hate going places (other than moving to a whole new country) I’m all about enjoying December as summer solstice from the semi-rustic confines of our wrap-around deck.

Suddenly, this milestone that was causing me so much anxiousness in the States that it was a factor in me leaving my freaking awesome full-time career is suddenly in our rear-view.

As it turns out, some things are much easier to swallow when they are kiwi-flavored.