I’ve always loved the risk/reward of a blind buy.

I’m not talking about buying a new appliance sight unseen here. I’m talking about more subjectively judged products, like music you’ve never heard or heard of or a dish of unfamiliar food of which the only detail you are only certain it is not poison.

If we always seek out what we know and have been recommended, how can we ever be surprised? Some of my favorite albums came from picking something up purely because of a band’s name or their photo, and the vast majority of my indie comic collection came from trying something without knowing a thing about it other than the aesthetics of a cover image or a few lines of promotional copy.

(How sure can you be about art until you consume it, anyway? Did that dance about architecture really tell you how great the building would be?)

That’s nearly all I had to go by on Butterfly. I had read scripter Marguerite Bennett as a co-author with a major favorite, Kieron Gillen, but that didn’t speak much for her on her own. The cover image is stark – the shape of an olive butterfly on a black background formed by the silhouettes of dozens of guns. 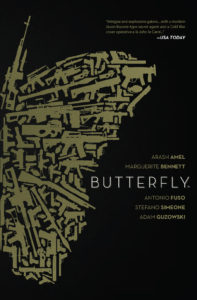 There was something about it that made me want to own it.

#140char review: Butterfly: an icy spy tale that doesn’t bother to wash the blood from its hands. A less touchy Alias or a less fanciful Mind MGMT. Just okay

Butterfly is not at all as delicate as its namesake. That goes for both the book on the whole and the main character, for whom its an alias.

We’re dropped into a mission already in progress with Rebecca Faulkner AKA Butterfly, and from the get she seems like more of a chameleon than a butterfly. She seamlessly slides into character for a dead drop and is just as facile in her initial exfiltration. However, when she discovers her routine contacts have all been disconnected she is forced to rely on a failsafe that puts her on a path to intersect her retired spy of a father, long since disappeared from her life. END_OF_DOCUMENT_TOKEN_TO_BE_REPLACED