I don’t know about you, but that’s way longer than any other vacation or break from the regular schedule of life that I’ve had since … um, let’s go with ever. It’s long enough that it’s starting to become difficult to differentiate between the days of the week, despite trying to hang on to some semblance daily norms like EV6’s bedtime routine. 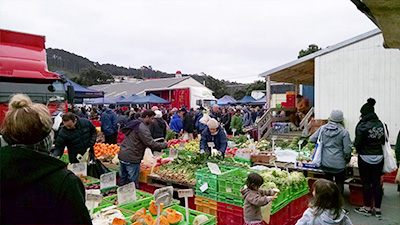 That’s why I was so excited to visit a farmers’ market this morning. Saturday morning farmer’s markets were a regular fixture of our Philadelphia life for much of the year, no matter which configuration of the three of us decided to attend. Even if this one paled by comparison, it would at least let me know it was Saturday.

As it turns out, the Newtown Fruit and Vegetable Market in Wellington dwarfed our little Landsdowne Farmer’s Market. Or, maybe it just seemed big because there were so many vendors squeezed into such a small space all selling similar things. It created an effect similar to a hall of mirrors, such that you saw endless rows of peppers, pumpkins, and kumara no matter which way you turned.

Not only were there (perhaps literal) tons of fresh food, but it was much cheaper than in the many supermarkets we’ve visited like Goldilocks sampling bear housewares. A bag of veggies almost too heavy for me to carry was only $35! Plus, I snagged a beautiful brocade-covered canvas bag for just five dollars from a delightful woman who said she appears at the market fortnightly, and I honestly would have probably paid just to hear her use that word casually in a sentence.

The market helped introduce a little bit of gravity into my week, but it was a trip to the local Mediterranean Food Warehouse, that made me feel more at home here. It’s a high-end Italian-influenced grocery store and eatery chain whose local outpost commands one corner of a large intersection nearby. END_OF_DOCUMENT_TOKEN_TO_BE_REPLACED