I love surprises. For example, in elaborating on the music of Peter Mulvey for Anthony, i discovered that Mulvey-tabber Josh Woodward has his own page, complete with video of Peter, MP3s of a recent full-band show (including, swoon, an electric “Wings of the Ragman“), as well as recordings of his own music (including a raucous cover of Johnny Cash’s “Folsom Prison Blues“). Josh’s name is one that i instantly recognize from the Mulvey fan list, and also from the site MulveyFan (and, take note Lindsay and Dante, apparently FruHead as well).

(And, less this post end without any self-centered content, note that Josh started about a year ago, which still leaves me as the reigning champion song-blogger. Well, actually, Scott Andrew started before me, but i have yet to ascertain if he did anything Trio-y at the inception of his page. Still, Scott is currently the coolest songblogger, as he just released a rad new EP of mostly web-debuted tunes that you should definitely, definitely buy.)

I think most people enjoy attending concerts where they know all the songs. I know i do. As much as going to a concert is for experiencing art in motion, it is also a selfish pursuit: you want to hear your favorite songs, and you don’t want them fucked with. There is a certain thrill that comes with the anticipation of a crashing bridge, or the appreciation of an understated vocal ad lib.

This approach is sometimes prohibitive to hearing new music, whether it be a new band or a performer debuting new material. But, no matter how well prepared you are, there can always be an opened band or a strange tune that punches past your lack of karaoke intimacy with to make you fall hard into aural love.

I found myself at the NorthStar Bar with a motley assembly of some of the most talented people i know to see just such a stranger: Kaki King. Anthony had described her to me by email earlier in the day – “Imagine Ani DiFranco on crack … She uses her right hand on the fingerboard to tap out bass lines, and her left hand on the fingerboard to play melodies simultaneously. It’s pretty impressive.”

I’ve come to accept my mediocrity as a guitar player — i’ve been playing only two years less than both Anthony and Kaki, but i am still easily impressed by simplistic guitar pyrotechnics. I was prepared to see a few interesting tap solos and some intricate picking, and to generally have my playing be humbled.

Really, though, i was not prepared.

I’ve seen a lot of random opening bands, many of whom i’ve derisively blogged about the next day, but Kaki King is the first artist since Peter Mulvey (and, to a slightly lesser extent, Erin McKeown) to ever leave me with my eyes unblinking, my jaw hanging loose, and my fingers twitching just in contemplation of my inevitable attempt to replicate the performance before me.

Kaki is, in short, the most astounding acoustic guitar player i have ever witnessed. It wasn’t just the casually arrived at alternate tunings, the tap & hammer solos, or even her simultaneous strumming & drumming on the guitar. It was her personality — quiet and simply smiling, but with a quick wit hidden beneath her swath of out-grown bangs. It was her ease — the way that after the audience’s obvious favorite song of the night she remarked to the effect of “That isn’t really finished yet; sometimes i just play the songs live and let them go in the directions they want to.” The way that, as opposed to how people joke about it with me, i really could not tell when her casual tuning and fretting ending and her songs began because at any point her hands were on her guitar the performance was underway.

Kaki has some MP3s on her site for your perusal, and while they will not replicate the awe that i was in on Tuesday night, i think they still speak adequately for themselves. And, please keep in mind that i typically range from indifferent-to-resistant when it comes to instrumental music, so Kaki must be pretty damned good.

Meet Ariel Meadow Stallings. She is a blogger of some note and repute, but i really only know her as a commenter on Little Yellow Different. Apparently, she’s also an occasional contributor to the (now defunct?) Shift magazine, which i had never even heard of before today. Her latest contribution was an article about small-time blogger Helen-Jane, who was hired (yes, hired) to blog on the behalf of a movie starring real famous people!

How, you ask, did a little-known blogger get flown across the country to do such high-profile weblogging? Simple: star on Ernie Hsuing‘s reality-based Blind Date Blog this past year, which i ostensibly served as a color commenter on, along with Cyan Pictures president Josh Newman. That makes Helen and i both alum of the same fantastic blog empire! So, theoretically i connect to Helen-Jane here. However, let’s keep moving…

The movie, I Love Your Work, stars Christina Ricci, Vince Vaughn, Jason Lee, and Elvis Costello. The index page of its website, to my vague disbelief, is literally Helen-Jane’s daily log from the set (which is also covered in this Salon article). The move site provides a link to Helen’s personal webpage and there, in her top-left-sidebar box she highlights what she is currently “listening to.” And, what, you ask, is she listening to?

None other than Peter Mulvey, my personal favorite folk-rock hero and my mainstay musical influence — not to mention being one of the few people on earth who owns both of my demo cds as well as occasionally talking to me from on-stage about his bottom-end. So to speak. 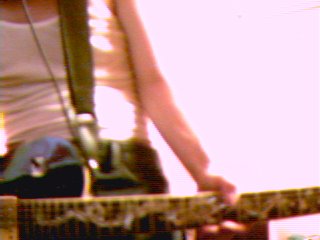 A new link: Brian Sharpe, a singer-songwriter out of Chicago, has high-lighted my Trio feature on his listening page. Brian has recently written the score to a local theatre production, but as Elise is asleep about five feet from here i cannot sneak a listen until tomorrow morning. For now i’ll be forced to keep listening to the inventive new covers record by Peter Mulvey on my tinny little earphones, but rest assured that i will be listening to Brian tomorrow.

Nothing’s stopping you, though.

For those of you without plans tonight, my favorite guitar player (and one of my favorite songwriters) Peter Mulvey is playing At The Point @ 8pm for $12; the R3 Rail Line will get you within two blocks of The Point. Aside from seeing an excellent live performance, you would get to see me, my mom, Elise, and maybe (if we’re lucky) Rabi.

Come on, you know you want to.