You are here: Home / Personal / topics / adulthood / Baby I Can Drive Your Car

This morning I was on the slowest possible trolley.

It made me think about travel powers, how we take our limitations for granted, and how no one can change that but ourselves. 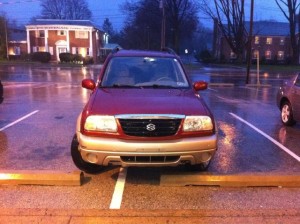 In defense of my parking, that was the first time I had ever driven an SUV and I didn't really understand the concept of its turn radius.

I drove a lot this past week.

I drove us into the city to hang out with friends. I drove Nan’s massive shuttle bus of a vehicle to pick up our fine dinner of Chinese food. I drove a tipsy E home at midnight in blinding rain.

(Which is an absolutely perfect situation to learn how to drive on a highway, and don’t let anyone tell you any different. The rumble strip is there for a reason, you know.)

My recent time behind the wheel has given me a chance to contemplate how I’ve limited my life around not being able to drive. I buy my essentials in bulk, since I can’t drive myself to the grocery store. I’m perennially absent from parties – especially ones at any distance – unless I can crash with someone else.

Even music – music – my number one commitment outside of staying married and holding down a job I enjoy – is limited by non-driving. I don’t go for gigs outside of Center City. I don’t look at concert listings outside of Philly. I assume I have to buy all of my friends’ new LPs online because I’m not going to make it out to their shows.

Of course, that all seems pretty normal. It’s been my life for my whole life. My non-driving was a serious commitment, right up there with my not watching TV, not eating meat, and not acknowledging the existence of Miley Cyrus. It was a big part of my identity.

It was also practical. And I didn’t have the money for a car, or for car insurance. I didn’t have the time to constantly circle for parking spots when we lived in South Philly. And for a long time I didn’t even have a car to learn on, so the entire point was moot.

Really, me not driving was for the best.

Back when I lived most of my life inside of City of Heroes I had a similar limitation: I wouldn’t take a “travel power.”

Most superheroes have them. Superman can fly. Spider-Man swings from rooftops. Batman has a mobile. Nightcrawler teleports – the whole point of him is travel! In City of Heroes every hero could choose a travel power at level 14 – flying, super-leaping, teleporting, or having super-speed. 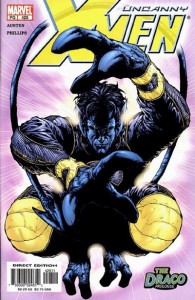 Nightcrawler's mutant power is teleportation. At the point that your entire super-power is all about travelling, would you even bother to get your driver's license?

All seriously cool powers, right? But, my main superhero gal was meant to be a normal human being. Plus, why waste a power on moving around when I could be… you know, more SUPER. SUPERER!

I was super. I was a serious superhero that could kick the ass of anything near my level. But you know what? I was slow. It took me forever to get to the place where I needed to be super. Teammates were constantly standing around waiting for me.

It didn’t bother me at all … until I finally broke down and learned to fly, at level 35. It was awesome. Everything was faster. I got to PLAY the game more, instead of just jogging around the game. Within a day I was saying, “Why the hell did you all wait for me all of that time? You should have given up on me and made me learn to fly!”

I don’t have my license yet, but my increasing confidence in the car means I just need to wrangle up a licensed driver if I want to go for a ride. I drove to a party I would have never made it to in time on SEPTA. I got new prescriptions on a weekend, without wasting a lunch break on them!

I drove the Nan-Tank to get Chinese food like it was nothing, electing not to dwell on the fact that it was my first time driving a car other than my own, and it was in flood conditions.

(“Just think,” Nan pointed out with glee, “if we weren’t in [the Nan-Tank] that wall of water we just kicked up would have swallowed your entire car!”)

(I can neither confirm nor deny if that was followed by a subtle “yee-haw!”)

As it turns out, real life isn’t entirely different than City of Heroes, except I wasn’t stubborn enough to wait until I turned 35 to learn to drive. In both places I insisted I spent my time, effort, and money on the most high quality parts of my life and not letting anyone convince my otherwise.

That’s great when it comes to not wasting money on cable TV or never having heard a note from Miley’s lips, but not when it hamstrings me from doing even more of the high quality things I like to do.

Soon I will be a sure enough parallel parker to obtain my lisence, and then that housebound, SEPTA-reliant portion of my life that I’ve always taken for granted will be over. I can go to parties. I can go on a vacation alone! I can go on a road trip!

Odds are you probably have your own travel power, but maybe you have some other limitation you’re taking for granted. Do you have the power to eliminate it? How would your life be better without it?

Or, is it there for a reason – like paying for cable television would just give me a pointless way to waste my money and time?