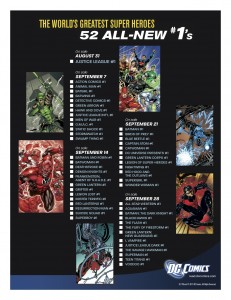 A schedule of all 52 debut issues due from DC Comics this month. Click through for a full-size version.

This month DC Comics is relaunching their entire line of comics – 52 issues #1s in a single month!

Not only is every series starting fresh, but the relaunch also represents a “soft reboot” of the DC comics universe. That means characters could have a new set of history as they re-debut, including breaking up iconic relationships or being suddenly de-aged back to a more-relatable 20-something.

I am not a DC comics fan, and have never been a regular reader of any of their titles aside than Wonder Woman – so why not try to read and review as many of their new 52 as I can in one month?

Sounds like a plan! The month starts with DC’s biggest gun – Justice League #1, with DC co-publisher and debateably best-penciler in the industry Jim Lee on art, and DC superstar Geoff Johns scripting. 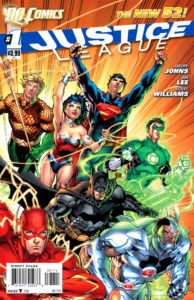 In a line: “You’re not just some guy in a BAT COSTUME, are you?”

DC’s reimagined Justice League are … The X-Men? The issue starts five years in the past when Green Lantern shows up to save Batman from a superhero kill squad in hot pursuit, and you’re hoping against hope the explanation will be something more deft than “because they hate and fear us.”

Yet there we are.

Yes, I suppose hating and fearing people with super-powers makes a lot of sense, but that schtick has been cornered and bludgeoned to death by Marvel. Also, it’s annoyingly dissonant to see these classic characters in that position. Sure, Batman is a wacko vigilante and Aquaman might have a bestiality problem, but is the government really going to chase after The Flash?

The conceit is that five years ago in the new DC universe was effectively year zero, with heroes meeting each other for the first time. Apparently they weren’t too popular with law enforcement (or, at least, Batman wasn’t). We’re treated to Batman’s introduction to and subsequent chafing at Green Lantern, who is as brash as Bats is brooding. GL gets one funny line after another. It’s clear that John’s is used to writing him, and that they’re playing up the Ryan Reynolds aspect of him as much as possible.

Both Batman and Green Lantern art scripted well, and the trickle of exposition from them is just enough to capture the imagination of a new fan. Yet, there is just barely enough plot here to call it an issue. Jim Lee isn’t exactly the fastest penciler in the world, you’d think Johns would write a little more script.

Instead, we get a brief tussle and several episodes of exposition, followed by a blah four pages with kid Cyborg. Also, note that the cast of characters are cynically the two heroes with the most recent movie, plus Superman – because, well… you know.

Lee’s action is bold but always easy to follow. What is unexpected (for me, at least), is the wild sketchiness of his shadows. Maybe it’s the doing of inker Scott Williams leaving more of Lee’s original pencil work intact, but the effect reminds me of 70s comics (a good thing).

Lee relentlessly knocks the opening Batman scramble out of the park from the first, deliberately un-iconic shot of Batman. Note all of the random insanity he has Green Lantern creating – a fire truck and giant bats!?

The single page of Superman is intriguing. He’s definitely boyish, but not as much as on the cover. And, though he is lacking his red underpants, the underpants are still sketched on – just colored the same as his legs.

The primary Jim Lee cover is expected, if not classic. Unsurprisingly, his Batman is outstanding (he’s penciled him before). I immediately am annoyed whenever GL wields a gun. Lee’s posing of Superman is strange, so that his eyes are obscured and he looks very boyish. (The Finch alternate is creepy – Superman looks like he should be wielding puppet strings, and Wonder Woman’s head is too big for her shoulders.)

Justice League #1 is too quick a read with too little happening along the way.

I don’t mean to grade a comic merely on expectations, but when the words “Justice League” and “Jim Lee” are connected you can’t help but hope for something on the scale of 1991’s all-time best-seller X-Men #1.

Instead, we’re building up the origin of the Justice League from square one – and you could do a lot worse than that! I’d argue that the first issue of your flagship team should either introduce everyone, be a huge blowout, or do both. This sort of expository story belongs in the individual character books, or – at least – explored after you’ve got your hooks in new readers.