Whether you’re a comics obsessee or a floppy books neophyte, parsing the new collected editions out each week is a chore. 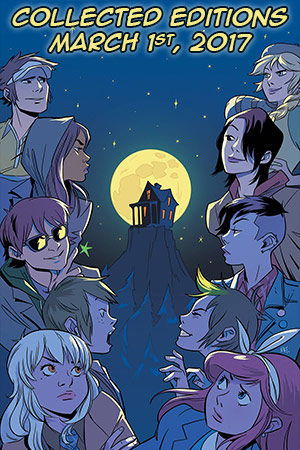 Sure, a faithful fan can visit the Previews catalog to see what’s out, but it doesn’t always explain what each series should collect and why you ought to care.

And, why would (or: should) a new or dabbling fan have to know what a Previews catalog even is!

I want to help both the masters and the newbies find the books that interest them the most. Thus, this post.

I think DC has the market cornered this week with two of their three scant releases – Lumberjanes/Gotham Academy and Zatanna by Paul Dini.

More on the Zatanna below. As for Lumberjanes: EV has been addicted to Lumberjanes ever since she turned three, to the point that she always has an invisible camper holding her hand when we cross a street. I’m not sure if Gotham Academy is similarly addictive, but this is probably a good buy for your early-grades comic fan – the most objectionable thing about Lumberjanes is generally how much time they spend hollering.

If you want to get started with Lumberjanes, Volume 1 is just okay, but the story begins to get interesting in Volume 2. For more on Gotham Academy collections, see Guide to Gotham or DC New 52.

And now, on to the books! 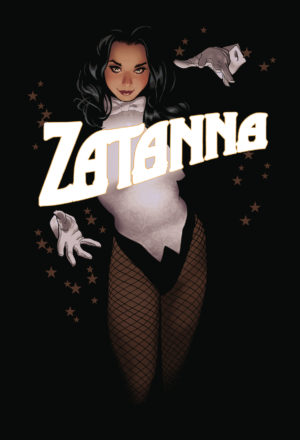 DC Collected Editions hit the mass market one week after the direct market, so these books are available from Amazon on March 7. It’s a light week for DC, but it includes two strong collections for a blind-buy. See Crushing Comics – Guide to Collecting DC Comics for more on DC’s collected editions.

Lumberjanes/Gotham Academy – Collects the crossover between the Boom! Studios campers and DC’s young Gothamites from Lumberjanes / Gotham Academy (2016) #1-6. More on this one above!

Zatanna by Paul Dini –  A hefty trade paperback collecting a slew of modern Zatanna from the Batman Animated Series mastermind. Whether you love this fishnet-wearing, magic-using hero or just think the cover looks cool, this is a great one-and-done volume. Collects Zatanna (2010) #1-16, Zatanna: Everyday Magic OGN (2003), and stories from The DC Infinite Halloween Special #1 and the DC Universe Rebirth Holiday Special (2016) #1.

IDW collected editions generally hit the mass market two weeks after the direct market, so these books are available from Amazon on March 14. A significant amount of IDW books are direct market-only, especially their high-end hardcovers. 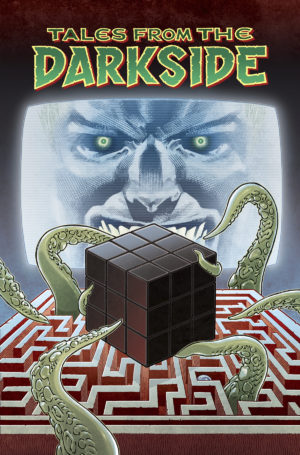 (I’d love love love to dissect the complete line-up of Joe comics for you, so if you’d dig a guide to G.I. Joe please comment or drop me a line on social media!)

Corto Maltese: In Siberia paperback – You’re not seeing things; this was originally scheduled for last week but got pushed to this one. The first full Corto Maltese original graphic novel by Hugo Pratt after years of shorter tales.

Dave Stevens Rocketeer Artisan Edition (Direct Market Version) paperback – Yep, this one was on the last last week too, although not as “Direct Market” edition. Artist editions aren’t available from mass market sellers (plus, this isn’t in previews for this week, but multiple sites confirm its release). You can collect the entirety of Stevens’ Rocketeer in a single paperback.

Tales from the Darkside hardcover – This is a little puzzling, so bear with me. There was a 1980s anthology horror television series called Tales from the Darkside that ran from 1983-1988. A reboot was announced in 2013, with writer Joe Hill (author of Locke & Key and Stephen King’s son!) as creative director. The series shot a pilot that was then passed on by enough networks that the project was considered deceased. However, Hill had already written a number of episodes. TV scripts aren’t incredibly different from comic scripts, so rather than let them go to waste, they’ve been illustrated by Gabriel Rodriguez (also of Locke & Key)! Voila! Four unconnected stories from a show that never aired! 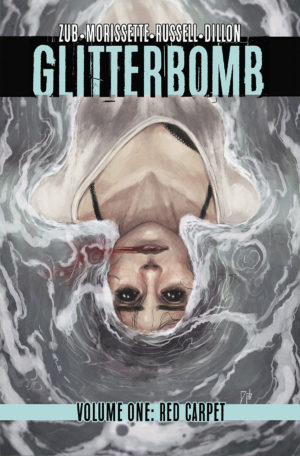 Image Comics collected editions hit the mass market one week after the direct market, so these books are available from Amazon on March 7.

It originally looked like The Walking Dead Volume 27: The Whisperer War would be out this week based on Image’s usual delay in books hitting the Direct Marketing, but maybe Walking Dead is big enough that it gets a same-day release in Direct and Mass Markets next week?

Glitterbomb Volume 1: Red Carpet – Collects Glitterbomb #1-4 by by Jim Zub, Djibril Morissette-Phan, and K. Michael Russell. Initial collects of Image titles are usually $10, and even without a discount that would make this this is a buy for me based on the strength of Zub’s Wayward, below.

The Complete Tales From the Con Paperback – Collects the complete web comic by Brad Guigar, Chris Giarusso, and Scoot McMahon

Wayward Volume 4: Threads and Portents – Collects Wayward #16-20 by Jim Zub, Steve Cummings, and Tamra Bonvillain. Wayward is among my favorite Image series right now. It’s like a Studio Ghibli take on superheroes, or perhaps an American indie-comics take on Manga tropes. If that sounds cool to you, I highly endorse start with Volume 1 or the gorgeous Deluxe Hardcover Vol. 1, which collects the first two trades. 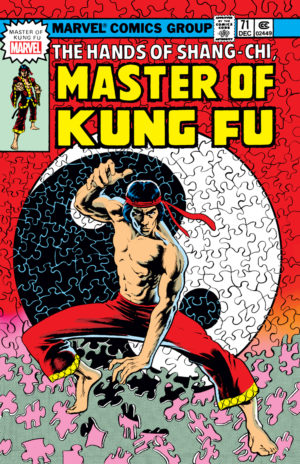 Marvel Comics collected editions hit the mass market two weeks after the direct market, so these books are available from Amazon on March 14. Note that Captain America & The Falcon: Secret Empire was originally meant to be out this week, but got pushed to next week. See Crushing Comics – Guide to Collecting Marvel Comics for more on Marvel’s collected editions.

Carnage, U.S.A. – A paperback reprint of Carnage, U.S.A. #1-5. This is a just-okay comeback series for the homicidal symbiote, but the real draw here is this is a rare comic where the interior is as awesome as the cinematic cover. Clayton Crain delivers weirdly three-dimensional, lifelike art that at times looks like it’s shot from stop-motion miniatures. Very bloody miniatures.

By all accounts, including my own, this Daredevil run by Waid is a real delight. It’s the first time anyone has had fun with Daredevil in a long, long time after a dire decade for the horned hero. This lighthearted Daredevil will appeal to you if your favorite thing about the Netflix series is the witty banter between Matt and Foggy, or if you’ve always liked the clean lines of 60s comics but are bored by their talky scripts.

While this is the first of two volumes, there are several satisfying stories to consume despite being left hanging for me (and this is the better half of the run). See Daredevil for more!

I generally don’t recommend these super-massive slipcases – they’re even bigger than an omnibus, which doesn’t make for very practical reading and (as you can see), they collect a scattershot grouping of issues to try to cover every era. While a Deadpool sampler platter is a great idea, you can do it for a lot less than $100! See Deadpool for more!

Death of X – Collects the four-issue event by Charles Soule and Jeff Lemire that tells the previously implied story that preceded All-New Marvel Now, which sets up Inhumans vs. X-Men.

Fans at first found this empowering, since there’s a lot of Inhumans-hate amongst X-readers these days. However, the series as a whole proved to be a bit wobbly and contradictory both to itself and to the comics that followed, which places this in “for completists only” territory for me. See Marvel Events for more.

Note that this is not the movie team of Guardians! The 1990s Guardians were roughly equivalent to DC’s Legion of Superheroes – a far flung future group of heroes comprised of random anthology characters and a handful of legacy heroes several generations removed from the present.

That said, there are a lot of fans of this material, which isn’t as typical a trope for Marvel as it is for DC. That’s in no small part due to Valentino, a favorite early 90s auteur who was among the best of the Image defectees even if he wound up being the least-read. See Guardians of the Galaxy for more!

Karnak: The Flaw in All Things – Collects #1-6 by Warren Ellis. Ellis can usually be relied upon for stellar comics, especially their kickoffs.

If you’re open to reading about this recently returned-from-the-dead Inhuman whoc an find the chink in any armor, this is the first solo outing he’s ever had! See Inhumans for more!

This is the last bit of Brian Bendis’s relaunch of Avengers from 2005 that is pretty great all on its own before it gets swallowed up by events and disappears into a string of unmemorable arcs. If you want to enjoy some blockbuster Avengers comics with a group of heroes you recognize doing really exciting stuff drawn by the best artists in comics, Volume 1 and Volume 2 are a great place to start. See New Avengers for more!

If you haven’t been following this omnibus series so far, I wouldn’t suggest jumping in here – although, the stories do start to take a turn from straight Kung Fu tropes to a slightly more spy oriented angle. See my post breaking down the announcement of this line of omnibuses for a lot more context. See Shang-Chi for more!

This is the All-New, All-Different Marvel relaunch of Inhumans in the wake of 2015’s Secret Wars event. While Charles Soule is still the author, this run sees the focus of the book slightly tick back towards the royal family with the reintroduction of Black Bolt into the mix. The first arc is a really good Kang story, which is not a sentence you’ll hear a lot for me given my general disdain for time travel tales. See Inhumans for more!

This book starts with the return of Jean Grey after her death as the Dark Phoenix, or so you might think – but there’s a little more to the story than that. Her return leads to the reunion of the original five X-Men – Cyclops, Beast, Angel, Iceman, and Jean – for the first time since Giant-Size X-Men in 1974!

With the main X-Men being somewhat persona-non-grata in the world (this is less than a year after God Loves, Man Kills), the team decides to take the tact of impersonating a team of ultra-conservative mutant hunters in order to find and secure newly emerged mutants

We don’t really get to the full-on fireworks in this volume, as it cuts out before things escalate through Angel’s turn into Archangel and the team’s confrontation with Apocalypse, but those have already been collected and are read for you to dive in. See X-Factor for more!

Selected Collected Editions from other publishers for March 1, 2017

Science Comics: Bats: Learning to Fly OGN (First Second) (hardcover / paperback) – I love this concept – an illustrated children’s story about an animal protagonist that delves into the science of their biology. They’ve also done coral reefs, dinosaurs, volcanos, and have flying machines, dogs, and plagues out later this year.

Previous Post: « This week in comic book collected editions – February 22, 2017
Next Post: Song of the Day: “If You Harden On The Inside” by Hezekiah Jones »