I’ve got a freshly updated comic guide for you – The Definitive Hawkeye Collecting Guide and Reading Order!

Don’t want to browse through the entire guide at the moment? Keep reading for little hits on where to start, what’s new, where the Hawkeyes have been in 2017, and what percent of Hawkeye’s comics have been collected. 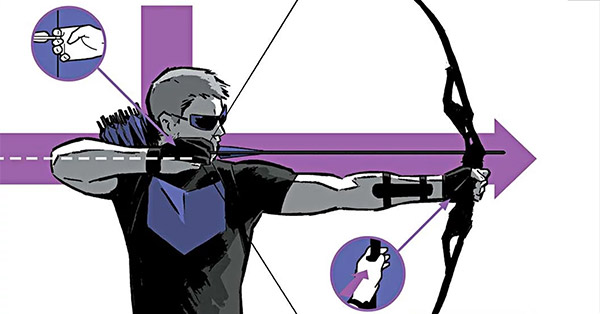 Getting started with Hawkeye?

If this is your first trip to the Clint Barton circus, the book you want is Hawkeye, Vol. 1: My Life as a Weapon. It’s the perfect deconstruction of the life of a somewhat-also-ran, mostly-unpowered hero.

It’s a comic that feels way more indie than it does Marvel. It gives Hawkeye a hell of a lot more personality than he has in the Marvel films. It’s also a terrific primer on Kate Bishop, the younger Hawkeye introduced in Young Avengers, and her sudden (and suddenly complex) relationship with Clint.

(By the way, it’s currently free to read with Amazon Prime or Comixology Unlimited!)

If you love it, you can follow-up by picking up an entire omnibus of the magical Fraction / Aja / Wu run, or just leap right into the new Bishop Hawkeye series Volume 1. (Two volumes of All-New Hawkeye come between the two, but are easily skipped). 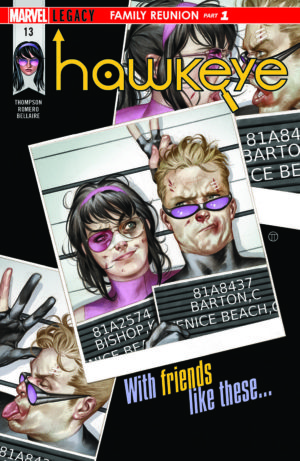 After Clint Barton became a pivotal actor in Civil War II last year and moved into Occupy Avengers as his primary book, Kate Bishop took over the Hawkeye comic book…

Writer Kelly Thompson has crafted a perfect echo of Fraction’s acerbic-yet-heartfelt Hawkeye, though Thompson’s Kate Bishop has a dash of Bendis’s Alias smarminess to it. I couldn’t put it down.

Hawkeye: Kate Bishop Vol. 1: Anchor Points is highly recommended, as is Thompson’s absolutely perfect Generations: Hawkeye & Hawkeye one-shot! Neither require any foreknowledge of Kate or Clint, and both are excellent, laugh-out-loud funny comics.

Thompson connects it more definitively to Fraction’s Kate stories in the second arc of the title. Plus, Clint will be back to assist Kate in the new arc starting with issue #13.

Back in the mid-late-80s, Hawkeye was the star of an Avengers spinoff called Solo Avengers, which represents the biggest gap in his collection history. You can get the first 10 issues in Avengers: Solo Avengers Classic – Volume 1.

How much Hawkeye has been collected as of this post and issue #12 of Kate Bishop’s current ongoing, which is the end of the current arc:

While 76% coverage doesn’t seem too shabby, for a hero with less than 200 issues associated with its moniker it really wouldn’t be so hard to push that up to 100%!

The most obvious 5% lift would come from a 8-issue trade of the 2003 series, which is entirely uncollected and modern enough that it might move some units. After that, we’d need three more Avengers Solo/Spotlight trades to wrap up that series – unless Marvel upgraded to their heftier, 15-20 issue trade pseudo-Epic format, in which case we might be able to do it in two new editions!

Want to know how to own the over 76% of Hawkeye that has been recollected from the form of its original release? Head to the Hawkeye guide for all the details!