That’s what we learn in WildCATs #10-13, where Claremont takes over scripting duties from Brandon Choi for Lee’s swan song on his own title. 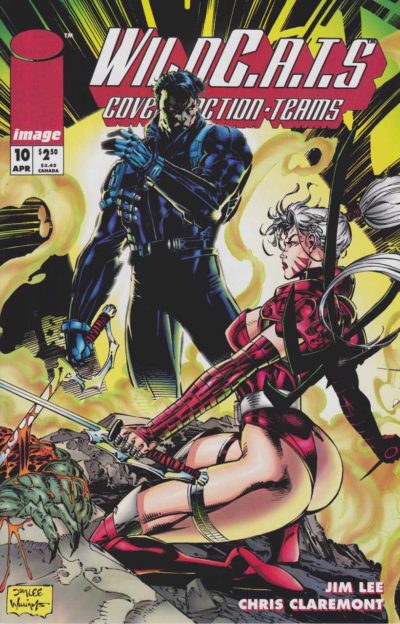 Claremont seems to agree with my assessment of the title – that Zealot is the interesting part, and everyone else should be jettisoned. He spends barely a combined two pages writing Marlowe, Spartan, Maul, and Warblade and the book is better for it.

Instead, he recruits a new primary team composed of Zealot’s smarter little sister Savant, generic gun-guy Soldier who is redundant to Grifter (since he’s stuck in Kindred for the first half of this story), Superman analog Majestic, and his own Huntsman.

It makes sense that Lee would recruit Claremont for a story that opens the door to so much of the history of Kherubim without ever saying it out loud. Lee seems to be in a rush to get all of these elements out onto the table before he departs the book, and it shows in his art. It’s still Jim Lee, but there are few of the magnificent, splashy panels he’s most known for. It’s his most utilitarian work on the series to date.

Even Claremont can’t seem to make sense of Lee and Choi’s WildCATs, their allies, or their villains. Tapestry is a visual stunner, but her power to weave souls isn’t too different than Misery’s psychic push from Killer Instinct. Her motivations are even less clear – does she want Marlowe, the mysterious Alabastar Wu, or Zealot?

Who knows. What becomes rapidly apparent is just how much Lee and Choi’s stories really have adhered to the Claremontian model. Is this truly so different than WildCATs #1-4? Is Voodoo’s ruse any different that Misery’s in Killer Instinct? Is Voodoo’s distribution of power any different than the Void/Marlowe team-up from the last story? Is it partially resolved by women repeatedly wielding the totality of their psychic powers?

This confusing yarn is an enjoyable read because the real Chris Claremont knows how to leverage these wordy tools like no other. Also, his stoic Huntsman is more charismatic than the entire male cast of the book save for Grifter – who mercifully returns to the action for the final issue.

The real delight here are the back-up features, which hint at a world beyond the WildCATs team we’ve been reading so far. Solider’s story is generic, but opens a new window on Zealot’s immortal history. Majestic’s interlude makes him out to be a Superman who decided to abandon humanity. And, Zealot’s first encounter with Tapestry shows she hasn’t always had a will made of steel – and some of that might even be Tapestry’s doing!

Want the full details? Read on to watch me try to make sense of my first Claremontian recap – may the goddess save our souls.. Here’s the schedule for the rest of this month’s WildStorm re-read. Tomorrow we head back to Stormwatch for this month’s main inspiration, the fast-forward from Stormwatch #9 to #25 and then back to #10!