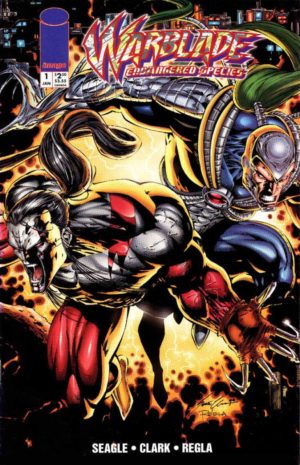 END_OF_DOCUMENT_TOKEN_TO_BE_REPLACED

We’re finally here! It’s the issue of Stormwatch that inspired this month of blogging even though I had never read it before.

With “Images of Tomorrow,” Stormwatch #25 leapt one year into the future to show the dark timeline that awaited the team …but I’m already getting ahead of myself. First, we have to read issue #9, with H. K. Proger on script and Ryan Benjamin penciling.

The issue makes the unusual move of giving us a second story in a row with a point-of-view character outside of our main cast. This time it is Sunburst, one of the members of Stormwatch Prime rescued from Gamorra in #6-7. 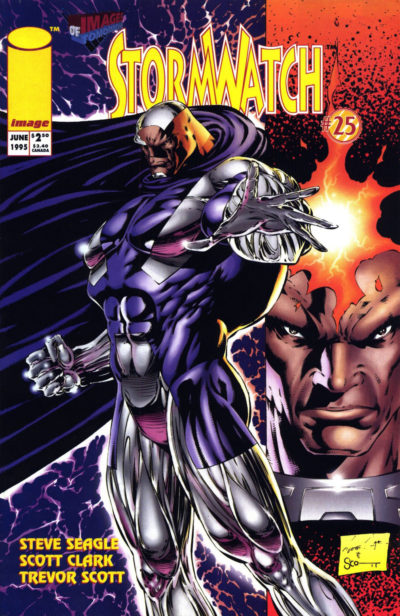 The story is a “race to defuse the bomb” tale that gives us some backstory on Sunburst as well as context for his relationships with his teammates Nautika and Flashpoint. However, that was just a red herring (both for Sunburst and for us as readers), as at the end we learn the point of the story was for Defile to finally crack Sunburst’s psyche after he proved unbreakable during his captivity.

This would seem like a minor fill-in issue on its own, but paired with the portents of #25 it takes on considerably more foreboding.

Steven T. Seagle randomly steps in on scripting duties on #25, but he’s abetted by Scott Clark on his Stormwatch swan song after penciling six of the first eight issues. Between Seagle’s script, Clark’s slightly perverted character designs, and the darkness of the tale, the book is fantastic.

Every page carries a chilling new reveal that you’d typically expect from a “What If?” tale, except this one professes that it’s really going to happen! If I had sat down to read it at the time I would have never dropped this book.

Silver Surfer scripter Ron Marz takes the title over with #10 for a run through #24. While I was a little peeved to lose Brandon Choi on his best title, Marz quickly made me forget my annoyance. You can feel his expertise lock in immediately with the dreadful pall that hangs over Battalion’s narration, and the nuanced descriptions of his teammates doubling as introductions we’re getting for the first time.

Marz is re-teamed with his Stormwatch Special collaborator Dwayne Turner, who does a much better job drawing a solid, dour version team of the team this time around. Maybe that’s because Marz gives him so much more room to breath than in the rushed pace of the Special. Each member gets their own spread to show off their abilities as he explains their histories.

It was a brilliant move to turn this Avengers-style procedural drama about policing the globe into a towering tragedy via glimpsing the horror of a future that cannot be prevented it. It elevates Battalion – already a great character – to the position of being WildStorm’s own tragic Hamlet. And, we the reader are left dreading every page turn for what it might reveal about Battalion and Diva’s fate.

Want the play-by-play? Keep reading for a summary of these two teams going head to head. Here’s the schedule for the rest of this month’s WildStorm re-read. Tomorrow we get to one of my favorite runs of this entire era – Gen 13’s original mini-series! Will it hold up to re-read 20 years after my last time paging through? I can’t wait to find out.

Need the issues? You’ll need to purchase single issues – try eBay (#9-10 & 25) or Amazon (#9, 25, 10). Since further Stormwatch series hit these same issue numbers, be sure to match your purchase to the images in this post. END_OF_DOCUMENT_TOKEN_TO_BE_REPLACED 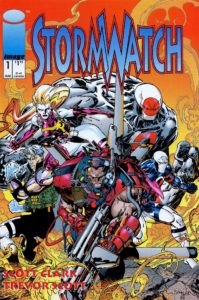 WildC.A.T.s played with the familiar “gifted one” trope of X-Men plus the alien conflict borne out in present day of Inhumans. From the start, Stormwatch was something much more nuanced even if it featured its fair share of X-TREME characters and powers and shoulder pads.

Stormwatch is ostensibly the Avengers or Justice League International of WildStorm. It wasn’t just one team, but a global, UN-sanctioned network of powered individuals governed by a central eye in the sky in the form of the all-seeing Weatherman One. Instead of focusing on a the customary holy trilogy of super-powers as both Marvel and DC’s analogues always had, Stormwatch starts as a personal story of the captain of the most-elite team – Jackson King, AKA Battalion.

The first three issues of Stormwatch are a satisfying blockbuster that compares favorably to the Claremont/Lee opening salvo on X-Men, Volume 2 in 1991. Even if it lacks the deep history of that arc, it has the same sense of scope and constant, kinetic action. The same can’t be said for #0, which is mostly filler wrapped around two or three intriguing pieces of information.

The book looked damned great under the pen of artist Scott Clark, who got plucked from the relative obscurity of producing art for the superhero RPG Champions to anchor this WildStorm co-flagship. His figures have all of the heft of Rob Liefeld’s biggest bruisers with the coherence of overblown anatomy of Jim Lee, plus detailed backgrounds. Brett Booth isn’t quite as good on the #0 issue, but he’s suffering from a too-dark set of inks and colors muddying his line work.

Battalion isn’t the only memorable character here. Headstrong Diva is striking with her chalk-white skin, pink one-piece swimsuit costume, and long blonde hair. She quickly emerges as Stormwatch One’s second-in-command. Fuji is more than a generic bruiser – he’s a mirthful being of pure energy contained in a bulky gray suit that gives the impression of an two-legged elephant. The pair gets only limited panel time, but they connect more meaningfully than the snoozy WildC.A.T.s team before Zealot and Grifter arrived.

In a line of unsteady books from artists turned auteurs and publishers, Stormwatch quickly distinguished itself as a title to watch.

Want the play-by-play? Keep reading for a summary of the team’s debut. Here’s the schedule for the rest of this month’s WildStorm re-read – tomorrow we’ll go solo with Deathblow #0-4!