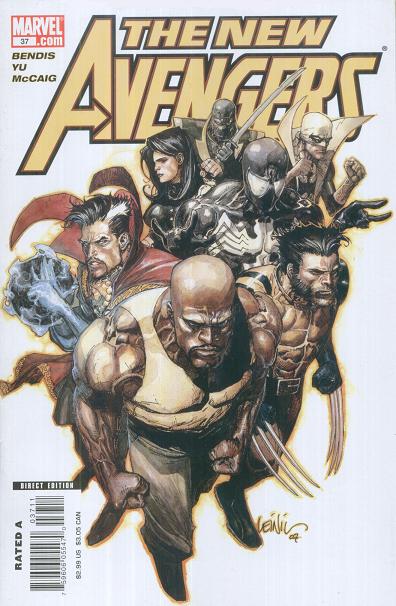 Probable Contents: New Avengers #32 through 59 or 64 (depending on if Siege is included or left in its own OHC), Annual 2, New Avengers: Illuminati #1-5, and Avengers Free Comic Book Day 2009.

(That’s the contents of New Avengers Deluxe Hardcovers 4-7. The prior Omnibus added some bonus content, but this one might not have the room.)

What is it? It’s the New Avengers are vigilantes in a post-Civil War world, but before you can enjoy too much of that there will be a lengthy break for the secret history of Secret Invasion.

This volume picks up from a bit of a cliffhanger at the end of the prior volume, where Echo kills Elektra who turns out to be a Skrull! This leads to team to worry that any one – including any one of them – could also be one of the shape-changing aliens.

We’ve all been perplexed about our wait for this volume, the sequel to a Volume 1 in 2012. The Avengers are bigger than ever. Bendis is still Bendis. Maybe that first volume didn’t sell out in an instant, but what is Marvel waiting for?

First, this collection is squarely in the Post-Civil-War world. Yes, the first collection pushed a handful of issues past the actual event, but this one is a lot of the team being chased around and unable to trust Iron Man, which is going to resonate more with casual audiences who have already viewed Captain America: Civil War. There was no harm in holding it for the sake of synergy.

What does that gang have in common? The answer is: 2016. Until Civil War we’d never seen Bucky be a good guy on screen, and none of the other three’s MCU tie-ins have debuted yet. Doctor Strange and Luke Cage are about to hit us nearly concurrently this fall, and rumor has it Iron Fist will first appear in Cage’s series.

Suddenly we have a status quo that makes sense even to lapsed readers and a team full of mega-hot characters. Sounds like we can expect this omnibus in 2017 for sure, right? Well… 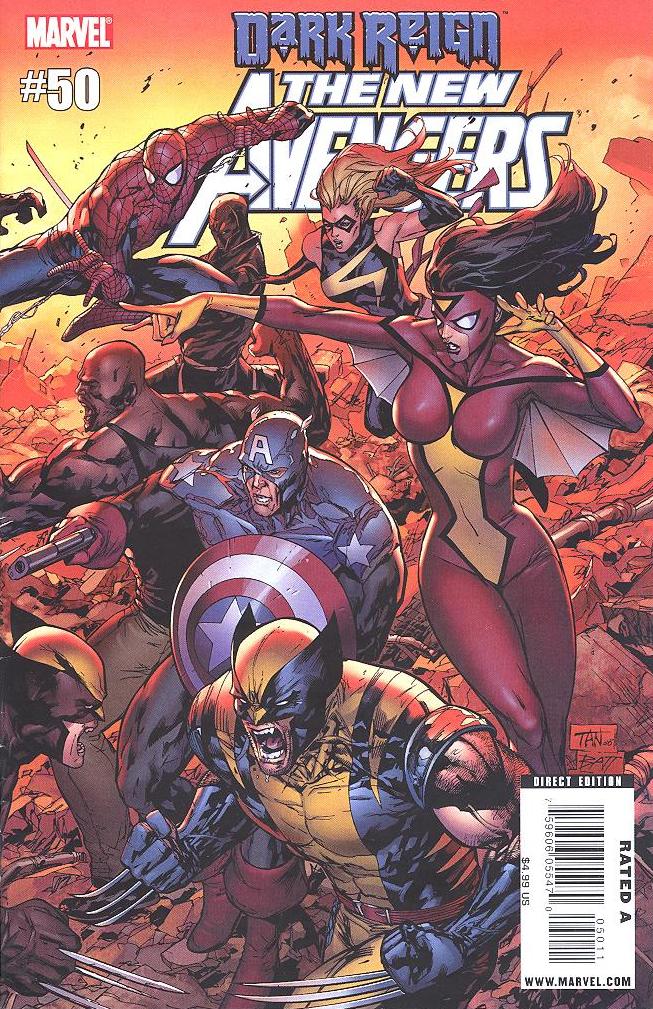 The third thing is a bit thornier. It’s three things, really – Secret Invasion, Mighty Avengers, and Siege. They all tie in strongly with this story.

The middle section of this run mostly drops the Avengers team and story in favor of the background story of Skrull infiltration from Secret Invasion. The Avengers action is actually happening in the Secret Invasion series itself. Meanwhile, Bendis was also writing Mighty Avengers in this same period through issue #20, at which point Dan Slott takes over. While the opening arcs are forgettable, even more Secret Invasion history is unfurled there. Then, after two other arcs, New Avengers winds up in Siege – again, potentially missing a lot of content without the main series.

You could also argue we could use a Secret Invasion Omnibus in the middle, but that would abandon some early Mighty Avengers and now we’re getting into Hickman-style insanity. The New Avengers run can stand alone – it’s how they released the OHCs.

Let’s just assume Marvel is waiting for the right moment to deal with Thing #1 and Thing #2 and that Thing #3 doesn’t really concern them.

With or without the tie-ins, how does the material hold up? Honestly, the story is pretty weak. When I read this run I went from excited in the first half to bored and wishing for it to end in the second.After the big Skrull reveal, all of the urgency drains from this title. Plots about chasing remaining Skrulls and thwarting The Hood and other villains are inessential.

While Marvel is definitely in the habit of leaving unfulfilled Volume 1 omnibuses hanging for years, one way or another we’ll eventually see this recollected – even if it’s not their top priority right now. And, given the reasons I outline above, that “eventually” might be within the next 18 months.

Want to read it right now? Visit the New Avengers Guide to see how this run has been collected in numerous formats to date. 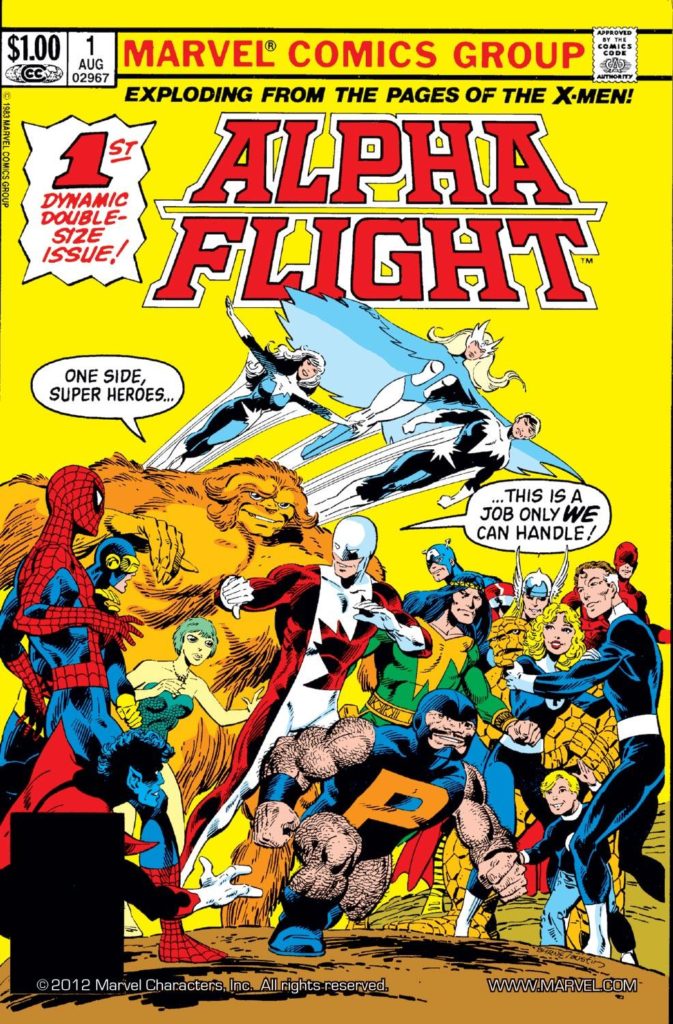 What is it? While John Byrne continued to unfurl his classic Fantastic Four run in 1983, Marvel convinced him to turn his attention to a rag-tag “bunch of superheroes who could survive a fight with the X-Men.”

Alpha Flight has an impressive record on the Secret Ballot – it’s rank in the first four years of the survey has been 4, 9, 6, and 5. That makes it the fourth most-demanded book of all time, behind three of the final four we’ll see in the coming days.

John Byrne was one of Marvel’s major auteurs for over a decade, drawing, plotting, and eventually scripting some of the most notable runs of the 80s. Alpha Flight is the third big hit on his journey, after working with Chris Claremont on a historic period of Uncanny X-Men and then launching an equally memorable (and more lengthy) period on Fantastic Four completely on his own.

In fact, he was writing and drawing the back half of his Fantastic Four run AT THE SAME TIME as doing the same on his launch of Alpha Flight AND writing and sometimes drawing The Thing.

These character were very much Byrne’s own creations, with some of their designs stemming back to his pre-Marvel days as a fan. They made their way into X-Men purely as a reaction to Wolverine defecting from the Canadian military – it made sense for Canada to try to get him back, but who could they send that could stand up to The X-Men? Alpha Flight was born purely out of necessity as a team of heroes that could hold their own against the uncanny mutants long enough to make for an interesting issue. In fact, Northstar and Aurora were created specifically to counter Nightcrawler’s teleportation and agility.

Marvel saw the obvious profit to be had from a ready-made team of X-Men analogues, but Byrne wasn’t especially interested in taking on the project. However, eventually he realized that since Marvel owned his characters it would either be him or someone else to write them – so it might as well be him.

I know, it’s not a very exciting origin story. Similarly, their debut issue sets their longterm tone as a team of rejects by kicking off with the Canadian government decommissioning the Alpha team, as well as their Beta and Gamma Flight backups! However, when an environmental beast named Tundra wreaks havoc across the landscape, it’s a mishmash of the Flights who battles it back. After their success, deposed team leader James MacDonald Hudson suggests they stay together as an independent superhero team.

Alpha Flight’s line-up mirrored The X-Men’s in more ways than one. Just as Dave Cockrum had taken an international approach to assembling the second generation of X-Men with Len Wein for Giant-Sized X-Men, Byrne deliberately cast his team for diversity of background rather than of nationality – a married couple, an indigenous person, a pair of adopted daughter, a dwarf affected by achondroplasty, a woman with dual personalities, and a gay man. 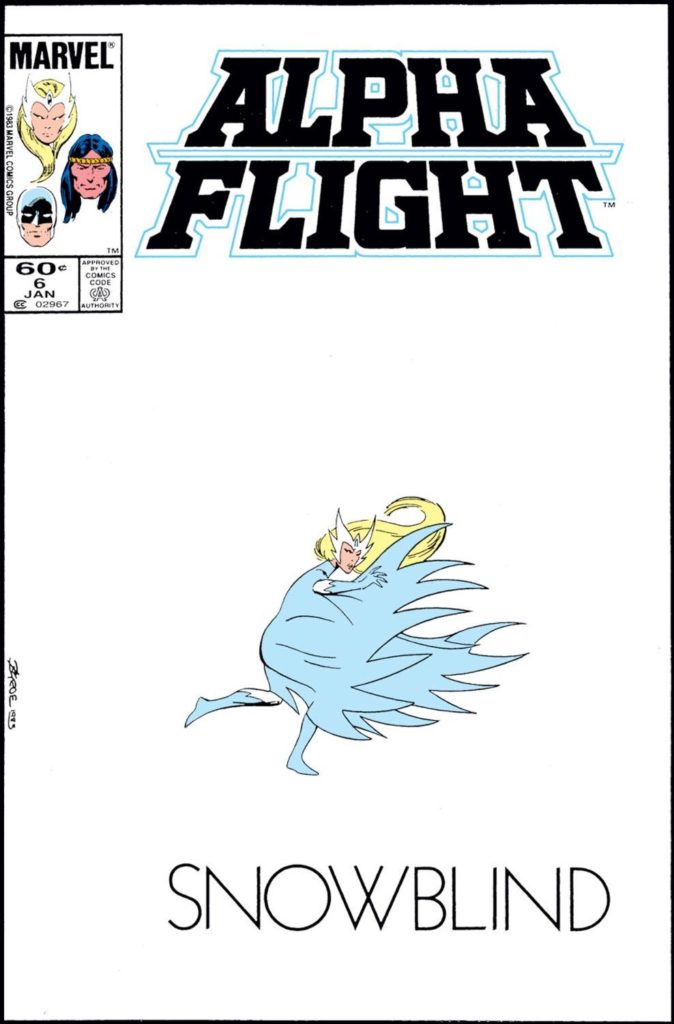 Yes, it’s of special note that John Byrne always intended for Northstar to be gay from the launch of the series, which wasn’t stated plainly until years later in #106. It’s interesting to go back for little moments of his humanity in the Byrne run (starting in issue #10) knowing this is what Byrne always intended. And, since Byrne’s intention (and subtext) was widely known to later Alpha Flight plotters including Fabian Nicieza and Scott Lobdell, it’s no coincidence that pair began a similar subtext with Iceman as far back as the early 90s with Brian Bendis finally outing him in 2015.

In a way, Byrne’s Alpha Flight run resembles Claremont’s late-80s X-Men in that this team is frequently disassembled and dealing with personal issues rather than battling evil together. It takes until #12 for them to gang up again, and tragic events there sends them scattered to the winds once more. The book is also the story of transformations – in one case from woman to monster, and in another to supportive spouse to superhero.

Truly, Byrne is one of the all-time all-stars of Marvel’s roster, and his name still sells books to this day – this year we’ve seen three volumes centered around him as a creator. But, is Alpha Flight marquee enough for an Omnibus, when a casual fan doesn’t know about its tenuous connection to the X-Men brand (and Marvel likely doesn’t have the rights for its films)?

It’s hard to say. Alpha Flight relaunches never seem to stick and this 1983 volume of Alpha Flight as never had a collection outside of the three Classic editions of Byrne’s issues this omnibus would re-cover.

Marvel would be taking major risk with this Omnibus – it’s way more niche than even New Warriors, which similarly has no cross-media stars in it. And, even if we get it, it’s a line that’s going nowhere, so you’ll have to be satisfied with this part of the story!

Here’s a spoiler: This book has been announced for January 2017(!), but this was my pre-existing prediction – clearly, I’m not psychic! Byrne’s run of books in 2016 haven’t been the top sellers of Marvel’s oversized releases and Alpha Flight is a mega-obscure set of characters who are only glancingly highlighted by Captain Marvel at the moment. Unless Marvel has major plans for these Canadians, I can’t see them hitting omnibus before some of the other X-adjacent material on this survey like X-Factor or Excalibur.

Want to read it right now? Right now Alpha Flight is relegated to my “X-Men Ongoings” guide, but given the level of interest on this survey I might upgrade them to their own page!