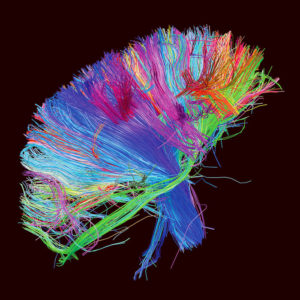 She not only pretends that she fronts a band, but actually writes songs for that band, rehearses them, and then sings them to us. She’s also got pretty solid pitch, can memorize most lyrics after two practice runs, and has started singing harmony to my originals when I play them for her.

She has a pair of musical parents, and has already sat in on dozens of rehearsals, but I like to think all of her musical interest and acumen is down to one song: “Madness” by Muse.

I’ve enjoyed Muse ever since I first heard an a cappella group sing “Time Is Running Out” back in college. There’s something about Matthew Bellamy’s rangy voice and the Queen-like bombast of their biggest songs that draws me in.

As with Kings of Leon, I continued to follow Muse’s releases oblivious to the fact that they were turning into the most popular band in the land. Their sixth studio album, The 2nd Law, came out on September 28th and I was already sure that I liked it when I heard “Madness” on the radio for the first time on Sunday, November 18th, on its way to being the longest-running Alternative Rock number one song of all time.

I remember the day, because that was the day we learned we were pregnant with EV. We were driving back home from seeing our friend Gina (not that one, the other one) in a play and the song came on the radio. We both sang along and traded the vocal percussion back and forth, smiled giddily at the “some kind of madness” that was about to take control of our lives.

After that car ride, Muse’s omnipresent “Madness” became the secret anthem of our pregnancy.

When we arrived at the hospital to deliver EV nine months later, we were met by one of the older midwives from the group of six we had been seeing. She was an authoritarian hippy, easy-going and new age-y but able and ready to command us at a moment’s notice. I know I wasn’t the pregnant one, but that’s pretty much everything I was looking for in a midwife.

Unfortunately, her hours of coverage were up midway through E’s labor. Just as we were getting comfortable with her, she was replaced with a young midwife who we’d only met once before. We were a bit bummed. How had we spent all these months forging relationships with a group of women who would deliver our child and missed getting to know the one who’d actually do the delivering.

The midwife’s name was Erin, another E-name in a room with E and an nurse named Elizabeth and, potentially, a little E-named baby, if our baby turned out to be a girl.

Erin shared E’s birthday – not just the day, but the year as well.

Finally – and to this day, I find this last coincidental detail utterly insane – like E, Erin sang in a semi-professional a capella group.

Erin was meant to delivery EV. It was all part of the madness. 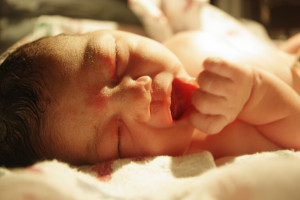 The first image of her I recorded somewhere other than in my gray matter. She is about 15 minutes old.

E and I had joked for a long time that she wanted the rocking soundtrack to Supernatural Season One playing throughout the entirety of her labor, but as the evening progressed I noticed she simply wasn’t getting into a good zone listening to all that classic rock.

The first time “Madness” came on she went into a sort of trance. I played it again and reflexively began singing the “mm-mm-mm-ma madness” part under my breath. Then, Erin began to sing along in harmony. Then, to our surprise, E began to sing too, quietly, between her contractions.

Almost every other moment of the labor process is a blur of details to me until EV emerged, but that moment remains frozen in time in that way all of my most significant memories are – where I can see it happen as an omniscient 3rd-person narrator looking in on the scene over my own shoulder.

Music. “Madness.” EV incubated in it for nine months, us singing along to it in the kitchen, trading the vocal percussion back and forth, and it summoned her into this world.